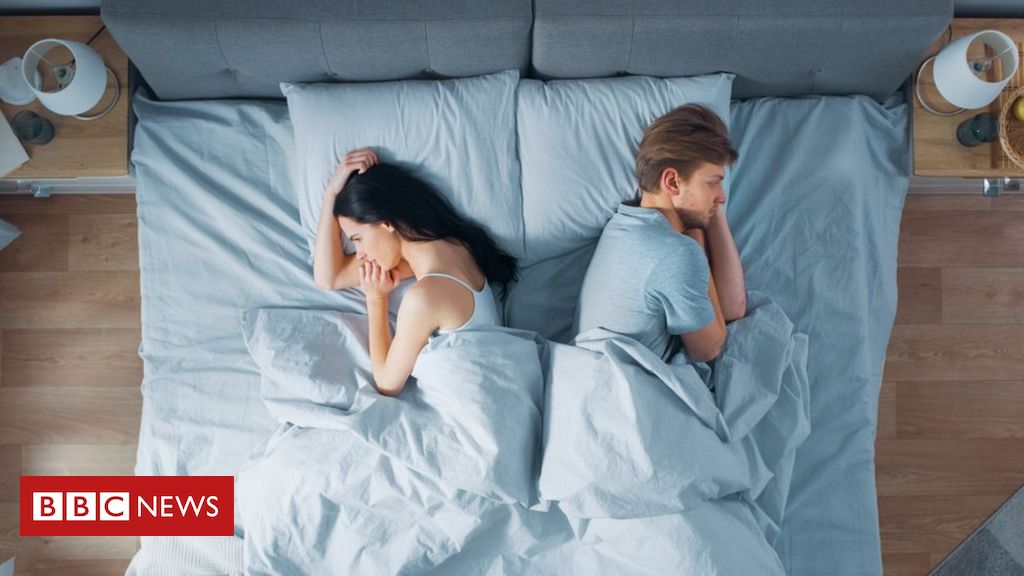 Why so many millennials report living in a sexless marriage

“In the first [vários] years of our marriage, we had an amazing sex life… and now that he’s gotten older (he’s now 30) he just doesn’t seem to be interested in sex anymore.”

This is one of many comments that appear in the r/DeadBedrooms subgroup on the social networking platform Reddit – self-described as “a discussion group for Reddit members who are experiencing a relationship with a serious lack of sexual intimacy”.

Frustration cases like this, from people who are in relationships with little or no sex, are frequent.

“Why does he prefer his own hand to having sex with me?” asks a message. And the subgroup’s outlook is somewhat bleak: “advice is always welcome,” the description reads, “but don’t be surprised to learn we’ve heard it all.”

It may seem natural when these stories come from older couples struggling to keep the spark they had decades ago. But many are posted by people who claim to be between the ages of 27 and 40.

Some claim that children or marriages interrupt their sex lives; others say their “low libido” husbands can watch pornography nonstop but are not stimulated. And the list of complaints goes on, with mobs of millennials posting about their “dead rooms”.

While millennials (born between 1981 and 1995) are at or close to their sexual peak, there are reports that some members of this generation around the world are “walking away from sex”. Millennial forums – including or/DeadBedrooms – confirm this trend, especially among married couples and couples in long-term relationships.

And recent statistics tell a similar story. A 2021 survey of adults aged 18 to 45 in the United States, conducted by the Kinsey Institute at Indiana University and the sex products company Lovehoney, showed that among married adults, millennials were the most likely to “report problems with sexual desire in the last year”.

“A low level of desire is not necessarily synonymous with a sexless marriage,” according to researcher Justin Lehmiller of the Kinsey Institute, but “when one or both partners in a marriage face reduced sexual desire, the frequency of sex typically drops. – and the loss of desire is one of the biggest reasons marriages end up being sexless.”

But what, exactly, is happening? Sex therapists and researchers point to a number of factors that may explain millennials’ sexless marriages, ranging from their current life stages to the almighty influence of the internet.

But regardless of the specific reasons for sexual problems, this generation is, above all, having to face unique and even unprecedented obstacles to achieving healthy sex lives.

The anatomy of sexless marriage

There are several definitions of a sexless marriage. One is literal: the couple does not have sex at all for a long period of time. And another widely used measure to define a sexless marriage is having sex less than 10 times a year.

The experts who spoke to the BBC also came up with varied ideas. New York sex therapist Stephen Snyder says, “I typically think of ‘no sex’ as four times a year or less,” unless the couple is “having sex every three months and both claim that this is amazing”.

Kimberly Anderson, a sex therapist and professor of psychiatry at the University of California, Los Angeles, School of Medicine, sets the limit on marriage with “little sex” to less than 25 times a year. Others claim that the definition is purely subjective. If a couple is unhappy with how often they are having sex, there is a problem that deserves to be addressed.

There are many factors that can lead to a sexless or sexless marriage.

When there is a “desire discrepancy,” in the words of sex therapist Christene Lozano of California, USA, that imbalance can grow over time if the couple doesn’t do a good job of addressing the issue.

The person who wants more sex and insists on starting may give up and lose their self-esteem if they continue to be rejected, for example. The partner who rejects you, on the other hand, may feel increasingly guilty, and both situations create even worse conditions for fueling desire.

Other factors can also contribute, including medical or mental health issues, which can make sex difficult, undesirable, or impossible. Busy lives with work and/or children can also take sex out of the equation, as can miscommunication between each partner’s desires.

While these aspects that contribute to sexless marriages are not specific to any one generation, some experts have observed a shift in people who experience sexless relationships and at what time of life.

“[Os casais] are going without sex in less time”, believes sex therapist Celeste Hirschmann, from San Francisco, USA. She has analyzed clients for about 20 years and used to observe, among her patients, that it took about 10 to 15 years for couples to stop having sex. “Now it could be taking three to five,” she says.

Anderson has worked as a sex therapist for 30 years and claims the demographics of sexless marriages have, in fact, changed since she started working.

“Thirty years ago, most of the sexless couples I treated were over 50 years old,” she says. They faced the decline in libido with hormonal changes and the diseases of aging.

But today, most couples in sexless marriages who seek Anderson are 45 or younger. “The dynamics behind the process are very different from what is/was with older couples,” she says.

The weight of stress

Too much stress can disrupt anyone’s sex life — and millennials, especially, have serious problems with cortisol, the stress-controlling hormone.

“Stress is one of the biggest libido killers,” says Lehmiller, “and millennials are a particularly stressed group in many ways, especially compared to Gen X.”

Major life stages are a factor. Many millennials are at the age where they are first-time parents or have young children. It is a grueling phase of people’s lives.

In a 2018 study by the British counseling network Relate, 61% of people in their 30s reported having less sex than they would like because “children get in the way”, while 31% said they have “lost their libido since they had sex”. sons”.

Other difficulties of this generation also arise from stress, as millennials were already behind previous generations in the pursuit of life goals, such as buying homes. Now, with prices soaring and student debt mounting, millennials are under severe strain, especially financially.

But most of all, the current state of the job market is dominating stress. Data from global consulting firm Deloitte, collected in five countries in May 2022, revealed that 38% of millennials report massive mental health problems, especially women (41%) compared to men (36%), caused, in largely because of anxiety at work.

Of course, the work environment has never been particularly stable or stress-free for millennials. “Many millennials started their careers during the Great Recession, for example,” says Lehmiller. And the added pressure of the Covid-19 pandemic has brought even new conflicts.

“In times of major technological change, people tend to overwork,” adds Snyder. And the data demonstrates that millennials are particularly workaholics.

Overwork often leads to exhaustion, which can make couples often too tired for sex at the end of a long day — a pattern that experts consulted say can persist if repeated too regularly.

And concerns about financial stability only exacerbate the problem. “Higher financial worries, coupled with higher rates of depression and anxiety, can be a particularly potent combination for producing high stress and low sex drive,” says Lehmiller.

The influence of the internet cannot be underestimated either.

Snyder describes social media as a “distraction” from physical interpersonal activities such as sex, but Hirschmann believes its role in the rise of sexless marriages goes much deeper.

She claims they lead to greater “image awareness” among millennials – the first generation fully engaged in heavy use of social media.

People feel the need to show perfection on these platforms, she says, with filters and retouches that aren’t available in real life. The resulting self-consciousness can accompany people to bed and marriage, making them less confident in their bodies.

According to Relate’s 2018 data, 37% of people under the age of 30 who were in low-sex partnerships reported self-awareness about their bodies, while only 14% of people aged 60 and over said they were in the same situation.

In addition to social media, experts agree that pornography has a big influence on millennials, as many of them came of age when pornography was starting to become widely accessible online. Of course, this is a huge change from previous generations.

“In the 20th century, some guys used to be sexually compulsive with a lot of women,” recalls Snyder. “These days, they tend to just watch a lot of pornography.”

In other words, they don’t have to look for sex with someone to have an experience that involves other people, even if those people are only on video.

Anderson has many male clients under the age of 45 in sexless marriages who suffer from “porn-induced erectile dysfunction,” a condition that makes it impossible or very difficult to get an erection without pornography, with someone in real life. This can make them prefer to have sex alone rather than with someone else.

She explains that some of them have become accustomed to having complete control over their pleasure, or the more extreme images they see in pornography, which their married sex cannot compete with.

Of course, millennials can’t change the fact that they entered the workforce during a recession and are now starting to come out of yet another one. Nor can they erase the influence of pornography or social media.

Of course, the lack of sex is a topic that some people find it difficult to talk about even with the person they share a bed with, which makes it even more difficult to understand these issues and find solutions.

As someone wrote on the r/DeadBedrooms Reddit subgroup recently, with busy lives and countless pressures, even raising the issue can seem impossible.

Previous WhatsApp: Groups will have more than a thousand participants
Next Brazilian to direct two episodes of season 5 of “The Handmaid’s Tale”