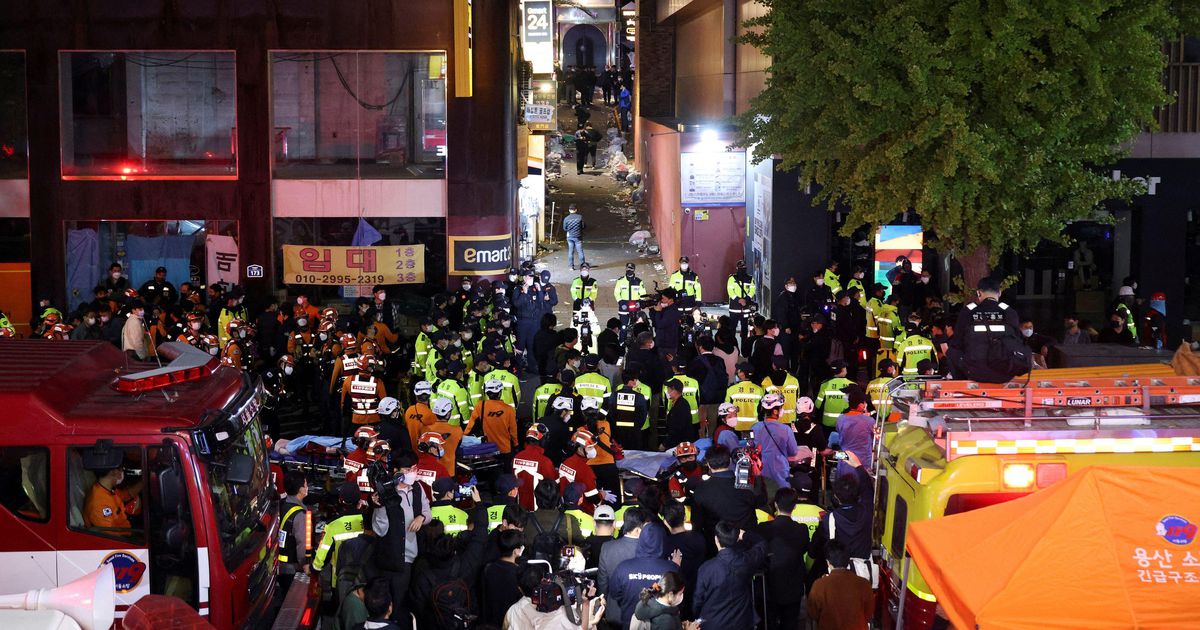 SEOUL – At least 149 people died and more than 150 were injured this Saturday, the 29th, at South Korea when being crushed by a crowd advancing down a narrow street during Halloween festivitiesin the neighborhood of Itaewon, in the capital Seoul, officials said. This is already the biggest peacetime tragedy in South Korea since the Sewol ferry sank in 2014, killing more than 300 people.

Second Choi Seong-beomfire chief, the death toll could still rise as there are many injured in critical conditions. More than 800 emergency workers and police officers from across the country, including all available personnel in Seoul, were sent to the streets to treat the wounded.

Authorities said people were crushed to death after a crowd began to advance in a narrow alley near the Hamilton Hotel, a major party venue in Seoul, at around 10:22 pm local time (10:22 am GMT). “The high number of casualties resulted from the fact that many were trampled underfoot during the Halloween event,” said the fire chief. Most of the victims were in their 20s, officials said without elaborating.

A makeshift disaster management center and first-aid clinic were set up under several tents opposite the Hamilton Hotel. Whiteboards were installed with continuously updated information on the death toll and the hospitals to which people were sent. A table with a clipboard and a pen was set up for the missing persons lists.

At the start of the incident, police reported that around 81 people were reported to be suffering from “breathing problems”. The South Korean national news agency Yonhap reported that about 50 people had cardiac arrests.

Photos published by the national media showed citizens, police and emergency workers performing cardiopulmonary resuscitation on people scattered on the sidewalk. TV footage and photos showed ambulances lining the streets amid a heavy police presence and emergency teams carrying the wounded on stretchers.

Police, who were restricting traffic in nearby areas to expedite transport of the wounded to hospitals across the city, also confirmed that dozens of people were receiving resuscitation techniques on the streets of Itaewon. The Seoul Metropolitan Government sent emergency text messages asking people in the area to quickly return home.

Local media said the narrow alleys of Itaewon were packed with up to 100,000 people for the Halloween festivities on Saturday night (local time). Earlier in the day, large protests blocked city traffic in the area. The incident raised questions about crowd management and planning at the long-publicized event.

Emergency vehicles struggled to get to and from the site, with congested roads and pedestrians scattering. At around 22:45 (local time, 10:45 GMT), an emergency vehicle packed with rescue workers was stuck in a traffic jam as it tried to reach the main road where the victims were.

The South Korean President, Yoon Suk-yeol, ordered the dispatch of first aid teams to the scene and asked the hospitals to prepare to receive the wounded, indicated the Presidency. The mayor of Seoul, Oh Se-hoonwho was visiting the Netherlands at the time of the incident, was returning to South Korea, his office said.

A witness said the riot occurred when a crowd broke into a narrow alley. “People kept pressing and more people were crushed,” the witness wrote on Twitter. “The people crushed under the crowd were crying and I thought I would be crushed to death too, breathing through a hole and crying for help.”

“There were so many people that we couldn’t move,” said Song Su-yeon, 46, who was visiting the neighborhood. “It felt like I would have died if I had fallen.”

The Itaewon neighborhood is known for its Halloween celebrations. It developed as a district of bars, clubs, and shops that serviced American soldiers based nearby in the decades after the Korean War. Now it’s one of Seoul’s most popular neighborhoods, known for its nightlife, young regulars, foreign tourists and stylish restaurants. The incident took place on one of the busiest nights of the year in the South Korean capital.

This is the first time that South Koreans have held Halloween celebrations in Itaewon without the mandatory use of masks outdoors since the start of the Covid-19 pandemic in 2020.

World leaders offered their condolences to the South Koreans. the american president, Joe Bidenexpressed his condolences to the families of the victims and extended best wishes for a speedy recovery to the injured: “The United States stands with the Republic of Korea during this tragic period.”

“Horrible news from Seoul tonight,” tweeted the British prime minister, Rishi Sunak. “All our thoughts are with those helping and all South Koreans at this very distressing time.”

All our thoughts are with those currently responding and all South Koreans at this very distressing time.

“My deepest condolences to everyone who lost their loved ones in the Seoul tragedy or saw them injured,” tweeted Anton Gerashchenko, adviser to the Ministry of Home Affairs at Ukraine. “May something like this never happen again.”/AFP, AP, W.POST and NYT