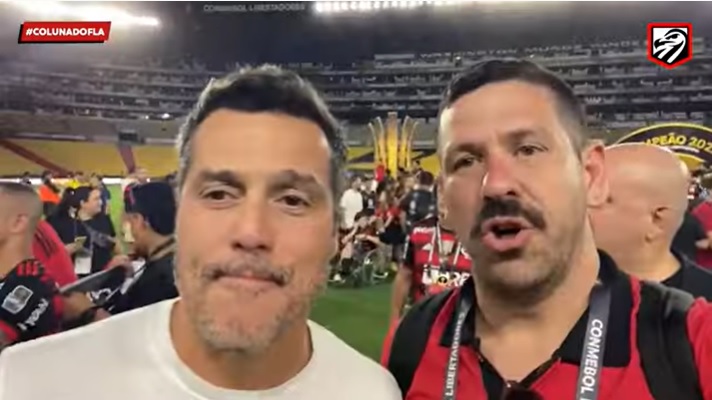 In an exclusive conversation with Coluna do Fla, Julio Cesar celebrated the achievement on the pitch

One of the most striking images of the 2019 Copa Libertadores title was that of former goalkeeper Julio Cesar fainting in the stands in Lima, Peru. In the 2022 conquest, the red-black idol was also present in the final this Saturday (29), when Flamengo beat Athletico-PR 1-0, in Guayaquil, Ecuador. In an exclusive conversation with the report of Coluna do Fla, the former archer compared the two decisions.

When asked by the report for not having passed out this time, Julio Cesar replied: “Here it was more peaceful. Congratulations to Flamengo for another title!”, said, laughing, the former goalkeeper. Unlike in 2019, the goal that secured the 2022 trophy came in the 49th minute of the first half, with Gabigol. Four years ago, shirt 9 scored twice after 40′ and made the idol ‘erase’ in the stands, in the turn over River Plate (ARG).

Julio Cesar never hid his love for Flamengo, the club that revealed it. The former goalkeeper turned professional in 1997 and left Mais Querido in 2004, when he was traded to Inter Milan (ITA). In Europe, the archer was elected one of the best goalkeepers in the world and reached the Brazilian National Team, where he played in three World Cups, in 2006, 2010 and 2014. In 2018, the former number 12 played two games for Rubro-Negro, before to retire.

Now, Julio Cesar is getting ready to accompany Flamengo in the Club World Cup, still in an undefined place and dates. In 2019, the former goalkeeper went to Doha, Qatar, to follow the Mais Querido duels in the competition, when Fla was in second position, after losing the final to Liverpool (ING). Before thinking about the commitments for next season, however, Fla has four games in 2022, for the Brazilian Championship.