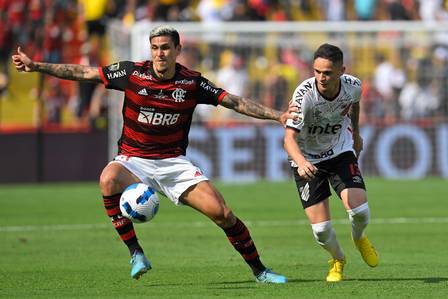 Flamengo forward, Pedro was elected the best player of Libertadores 2022 and will take home a treat: a ring with 28 grams of 18 carat gold and 128 diamonds. The jewel was made by Bridgestone, a Japanese tire manufacturer, one of the sponsors of the tournament since 2013. The company does not reveal the value of the jewel – it is speculated that it is at least R$ 200 thousand.

In addition to Pedro, Vítor Roque and David Terans, from Athletico-PR, and Arrascaeta and Everton Ribeiro, from Flamengo, competed for the award. The ring was given to the winner shortly after the big decision, still on the field of the Estadio Monumental de Guayaquil, in Ecuador.

About the game: Gabigol decides, Flamengo wins Athletico and is three-time Libertadores champion

Pedro was the top scorer of the 2022 Libertadores. He scored 12 goals and was ahead of Rafael Navarro (Palmeiras), Rony (Palmeiras) and Lucas Janson (Vélez Sarsfield), with seven.

The center of the ring simulates the competition cup, which is surrounded by a series of diamonds. There are 128 precious stones, six more than the ring from the last edition of the Copa Libertadores.

The jewel was taken to the decision stage by the company itself, in partnership with a security agency. It was made in Brazil. In the first year that the ring was presented to the best player in the competition, in 2019, it also had 128 diamonds and was given to Bruno Henrique, from Flamengo.

‘Missed you, daddy’: Flamengo’s Cebolinha misses his son’s party in the Libertadores final

In 2020, Marinho, from Santos, even though he was defeated in the final by Palmeiras by 1-0, was the highlight and won the jewel with 131 diamonds, developed in honor of the Maracanã stadium, stage of that decision. In 2021, the winner was Gabigol.

Previous Angelina Jolie reveals why she participated in the failed film
Next Column: children’s production and Brazilian comedy debut in cinema – 10/29/2022