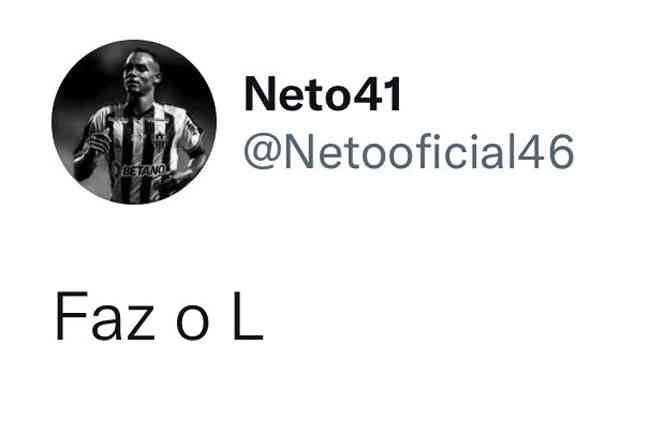 The midfielder Neto, from Atltico, suffered a xenophobic offense on Twitter, this Sunday (30), when he expressed his preference for Lula (PT) in the presidential election.

During the afternoon, Neto wrote on Twitter: “Faz um L”, in reference to Lula.

In one of the comments, a follower made a xenophobic offense directed at Neto, who is from the city of Guanambi in Bahia.

“Rooster has to send you back to Guanambi to live on a family allowance, what Bahiano does best (SIC)”, wrote a follower.

Soon after, the follower deleted the offense made to the athletican player.

Away due to indiscipline

On September 4, 20-year-old Neto was removed from the Atltico professional squad and returned to the base. The reason was indiscipline,

The last game of Neto for the main team of Atltico was the victory by 1 to 0 over Emelec, for the return of the round of 16 of the Copa Libertadores. The midfielder played four times in the season.

In total, the young player has played 14 games with the Atlético shirt. Last year, under Cuca’s command, he scored the only goal as a professional, in the 2-0 victory over Athletico-PR, in Mineiro.

Previous Top of The Lake, with Elisabeth Moss, will be shown on TNT Series
Next Xiaomi laptop features OLED screen and 12th Generation Intel chips