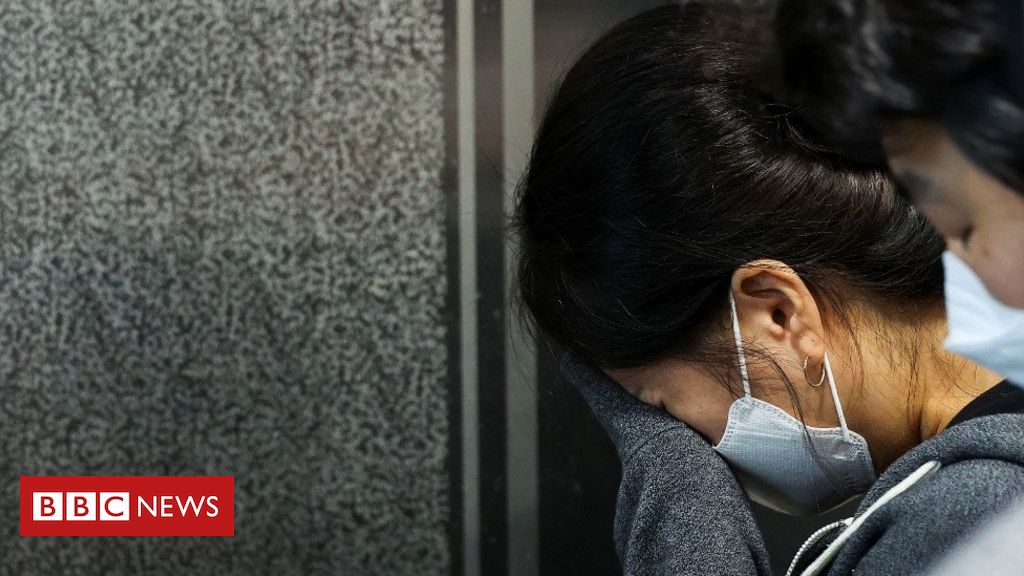 ‘People fell like dominoes’: reports of the Halloween panic in South Korea

Witnesses describe scenes of panic and utter chaos as the narrow streets of the popular Itaewon district of Seoul, South Korea, were filled with a crowd that found it difficult to breathe and move.

“There were tens of thousands of people, the most I’ve ever seen in my life… to the point where we were crushed to the ground,” independent journalist Raphael Rashid tells the BBC.

Thousands of teenagers and 20-somethings were dressed up for Itaewon, a district in the heart of the capital that is known for its intense nightlife.

They were excited to be able to celebrate the date, after two years of restrictions in South Korea due to the covid-19 pandemic.

But videos from the celebration show the unfolding of a tragedy that one of the witnesses likened to a war movie.

More than 150 deaths were confirmed and more than 80 people were injured on Saturday night (29/10), according to local authorities.

It is still unclear what caused the incident and local authorities have begun investigating the case. According to initial investigations, the tragedy occurred in an elevated area, from where some people fell, causing a large crush.

A steep alleyway turned into a death trap as the crowd seemed to rush forward and the people in front fell down and were trampled by those behind.

The images that spread across networks show crowds so tight that people could barely move.

Some got out safely, but in these records circulating on the internet you can see people desperate as they helped paramedics try to revive the wounded. Also, there was a long line of bodies in bags on the sidewalk.

‘The people in the middle’

“A short person like me couldn’t even breathe,” a witness said in an interview with the AFP news agency.

This witness said he only survived because he was on the edge of the alley and that “the people in the middle suffered the most”.

Raphael Rashid said that “no one really understood what was going on” and that some officers were “standing on top of their patrol cars desperately trying to tell people to get out of the area as quickly as possible.”

Doctor Lee Beom-suk told local broadcaster YTN that he had tried to revive some victims with CPR (cardiopulmonary resuscitation), but “the number (of victims) exploded soon after,” exceeding the number of rescuers on the ground.

“Many passersby came to help us with CPR,” he said.

He also said that “the faces of many victims were pale”.

“I couldn’t take a pulse or breath and many of them had a bloody nose.”

Park Jung-hoon, 21, told Reuters news agency the situation was “completely out of control”.

And Moon Ju-young, also 21, noted that “there were a lot of people.”

“I know the officers and first responders are working hard, but I would say there was a lack of preparation.”

A resident of Itaewon, Lee Su-mi, 53, told Reuters that “those young people who were called the ‘covid generation’ were finally able to celebrate Halloween as their first festival.”

“So no one was able to predict that the festival would turn into a disaster.”

“They died at the hands of my friends”

Ana, a 24-year-old Spaniard, was called to help in one of the attempts to revive victims using CPR, despite never having done so before.

She and her German friend Melissa, 19, were in a bar next to where the tragedy took place.

As they tried to leave, around 11 pm local time, they saw ambulances and police running to ask people to move away to make room to evacuate the dead and wounded.

“There were so many people who needed ordinary people to do CPR. So everyone started participating and helping. We had two friends who knew how to do CPR and they came to help,” Ana told the BBC.

“Three minutes later, or maybe more, they came back, clearly traumatized and crying because they tried to save five or six people, but they all died at the hands of my friends,” said the Spaniard.

That’s when Ana left to help two girls. Not knowing how to perform CPR, she followed the directions of others.

Jessi Jassicah was in a bar on the corner of the alley where the tragedy occurred.

She had just opened a bottle of champagne when she heard a scream and turned to see what was happening outside the establishment.

“People had already fallen,” he said in a video shared on Facebook. “And they fell like dominoes.”

According to her, people began to struggle to stand and security guards tried to prevent those trying to escape the crowd from entering the bar.

“I was locked up for a while because security wouldn’t let me out. I was terrified when I saw people spitting blood and how they were trying to revive them,” she said.

She said that when she managed to get out and walked down the alley next door, she was surprised to see that “tourists were still dancing, still taking pictures”.

“It was shocking because a lot of people hadn’t seen the news, they still didn’t know what was going on.”

Previous Rivaldo says that Luxemburg’s support for Lula is a big disappointment
Next See what Adam Driver from Dr. Destiny