The Intensive Workout That Turned Natalie Portman into a Toned Superhero

Known for her elegance and grace, the actress had to go through a process of increasing her daily calorie intake. 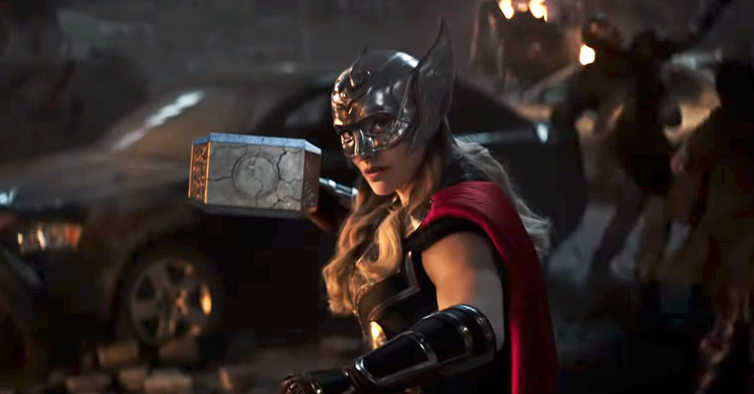 Natalie Portman is Thor in the new movie.

Natalie Portman is known for her slim, elegant figure. In 2010, she played Nina Sayers, an obsessive ballerina who sparkled with every plié. This role in the film “Black Swan” earned her the Oscar for best actress in 2011. And this success was joined by many other performances in which a characteristic that no one is indifferent to stands out: the incomparable grace of the Israeli-American actress. However, in the new movie “Thor”, the 41-year-old actress appears much more muscular.

In the year in which her talent was recognized with one of the most important awards in the film industry, Portman gave life, for the first time, to physician Jane Foster. In 2013 and 2019 he returned to play the movie’s superhero love interest. Now, in the latest sequel to the “Thor: Love and Thunder” saga, which opened in theaters on July 7, the character takes on greater relevance.

Thor (Chris Hemsworth) finds himself on a journey unlike anything he’s ever been through — he’s looking for inner peace, far from the usual cosmic adventures. The doctor, for her part, faces her problems: she suffers from a fatal cancer and in an attempt to stop it ends up managing to master Mjolnir, the protagonist’s former hammer, and she also became a Thor, with the right to a cape, helmet and all. However, each time she uses the powers, the energy needed to fight the cancer fades.

The twist in this sequel reveals not only a new facet of the skinny doctor, but Natalie Portman herself. The actress appears with incredibly toned arms and legs, a result of the commitment she made with the filmmakers to prepare herself “as much as possible”. Dedicated, the actress took, according to her personal trainer Naomi Pendergast, the goal very seriously. In an interview with Variety, the professional explained the plan she outlined to turn Portman into a superhero.

Practices were the starting point. They began working together four months before filming began. The goal was to make the actress strong and agile enough to be able to safely pick up weights and define the abdominal and arm muscles, as the film demanded.

“We worked his upper body three times a week, with arm, back, chest exercises, boxing lessons, rope jumping and lots of running,” Pendergast said. “The other two days were dedicated to injury prevention work, which included Pilates-based movements, stretches, and balance postures.”

Running and many boards

During filming they continued to train at least two hours a day without interruption. The demand and commitment increased when the fitness coach realized that Portman’s performance didn’t just require muscle work. “The role involved learning various stunts that required you to have a strong abdominal wall and agility to land well. “I was surprised by the intensity of the physical side of the character”, she revealed to “Shape”.

Pendergast “had to introduce heavyweights” into the aspiring superhero’s fitness routine. Training also involved running, an activity they both enjoy. “Natalie loves to run, so we would go out for a few runs a few times a week and include some treadmill sprints in our gym sessions,” says Pendergast.

The training part itself was very demanding. The first step was to warm up. For this, the personal trainer created a super set with elastic bands with four exercises. These must be done for 30 seconds. In the first, Natalie did squats with the elastic: she put one end of the accessory under her feet (which were shoulder-width apart) and held the other end with her hands. The second moment was dedicated to opening and closing the arms with the elastic band attached to each hand. In the third exercise, the elastic band was stuck under one of the feet and with the opposite hand pulled it diagonally to the height of the chin and 30 seconds later changed hands and support foot.

After having the necessary muscle groups warmed up, the actress moved on to the workout itself. For the first exercise she needed a bench and a weight (to do it at home she can use a bottle of water). With the palm and right knee bent on the bench, the left foot on the floor and a dumbbell in the left hand, the objective was to bend the left elbow up and then extend it down. Then, she would lift the dumbbell to head height and repeat 15 times.

Leaving the bench behind, the actress then picked up two dumbbells, one in each hand to perform Dumbbell’s raise up. This exercise consists of raising and lowering your arms alternately to shoulder height, keeping your body still. Finally, I moved to the inverted planks and then to the side plank with arm rotation. The training always ended with jump squats, that is, squats with jumps.

High protein diet was the secret

To gain the necessary muscle mass, training was not enough. The actress had to get into a process of increasing her daily calorie intake. Naomi Pendergast explained in an interview with “Insider” the diet of the actress: “To determine her needs, Natalie did a metabolic test. It is an analysis that gives a very accurate reading of the daily calories needed by each person. From these numbers, we calculated how many extra calories she needed to eat per day to build muscle.”

The actress’ vegan diet was never an obstacle. Her breakfast now included porridge with berries, and her post-workout snack was always a protein shake. At lunch she usually had falafel – a traditional Middle Eastern dish – which she accompanied with another protein shake, and at dinner she opted, for example, for a vegan curry, also accompanied by a shake. The only snacks that were included in the plan were fruit and nuts.

Previous Suspension bridge collapses in India, killing at least 60 people
Next Fagner passes Rivellino in the list of those who most defended Corinthians