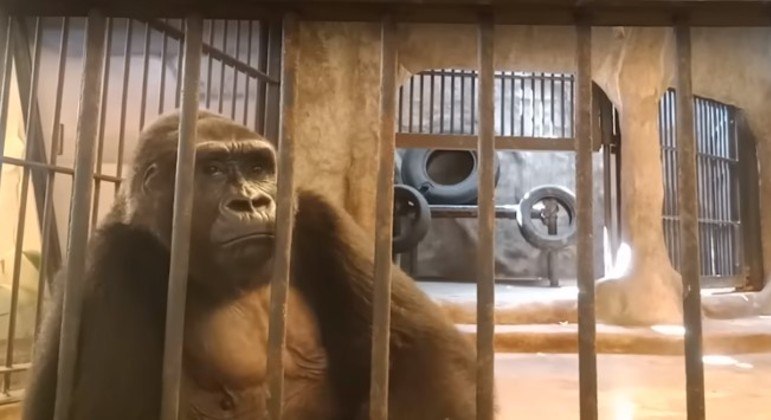 The heads of a zoo above a mall in central Bangkok, Thailand, are refusing to release “the world’s saddest gorilla” to allow her a brief taste of freedom before she dies.

The gorilla Bua Noi has been held captive in a cramped, dirty cage with rusty metal bars since arriving from Germany in 1990. The animal has never set foot off the concrete floor.

Even so, Pata mall bosses challenged calls from the government, animal rights group PETA and even singer Cher to release the animal.

Activists hope that Bua Noi – which means “little lotus” – will be released to spend his last days in a sanctuary with other gorillas in Germany.

The animal’s suffering is so much that it seems like there are tears in Bua’s eyes when she looks behind the bars of the enclosure in which she lives, through a plastic screen that separates her from the tourists.

It is believed that the owners would only release the gorilla if the Thai government bought it for £700,000, the news website reported. Matichon.

But the department store company turned down the offer to end Bua Noi’s plight, despite the government starting a fundraising campaign.

“We have carried out activities in the past to campaign for the release of Bua Noi and to raise funds,” said Thanetpol Thanaboonyawat, secretary of the Minister of Natural Resources and Environment to the Daily Star.

“But the problem is that the owner refuses to sell Bua Noi. When he agrees to sell it, the price is too high,” he adds. “Bua Noi is considered private property, so we can’t do anything to remove it.”


Furthermore, the secretary said there was nothing the government could do to apprehend Bua Noi under Thailand’s animal welfare laws. “The owner bought Bua Noi before laws were introduced to prevent the trade and possession of endangered and wild animals,” he said.

The Pata Zoo claimed that Bua Noi would not be able to adapt to a new home and that it is “taking good care of the animal and aware that she could die at any time due to her old age”, the news website reported. Thai Examiner.

The site’s director, Kanit Sermsirimongkol, has even previously said that they care for the gorilla “like our daughter”.

“This decaying facility is internationally condemned as one of the worst zoos in the world,” he said. physical and mental needs.”

Bua Noi’s plight first emerged in 2015, when animal rights activists delivered a petition calling for the gorilla’s release and the zoo’s closure.

Previous joke? Video cards are sold “by the kilo” on the street in Vietnam
Next 39 Thoughts I Had When Watching Persuasion with Dakota Johnson – Vogue