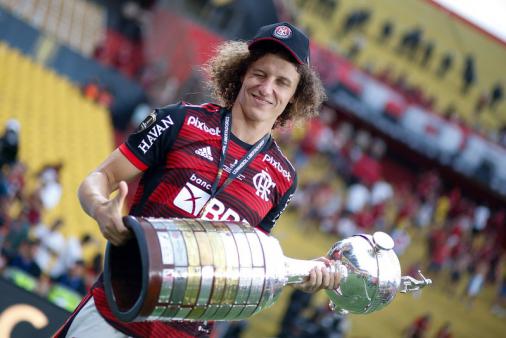 leader of FlamengoDavid Luiz insisted on making a video call with Andreas Pereirastill in the dressing room of the Monumental, in the commemoration of the Libertadores title. The midfielder, who ended his spell at the club in July and was marked by the mistake in the 2021 final, was praised by the defender, who tore praise for his companion.

David Luiz talked about Andreas Pereira and his importance in this third championship of Flamengo in Libertadores! 🔴⚫️

– He played 7 or 8 games in this Libertadores. He is a special boy, a giant heart and a tremendous player. He did everything he could to stay with us, unfortunately it didn’t happen. What happened to him last year, he suffered a lot. He’s part of it. If it weren’t for his dedication and resilience, perhaps, to continue and show in training, to serve as an example, we wouldn’t be here – completing:

– Maybe they don’t understand this, but you arrive in pre-season and Andreas has the best physical levels of all after an emotional crash. This sets an example and conditions the group to see things differently. The only thing I wanted to do there is because I love this boy, as a friend, player and he is part of it. Everyone in the locker room screamed his name. Not only him, but everyone who participated are part of it. Nobody conquers anything alone. Andreas is something special in this third championship.

With the titles of Copa do Brasil and Libertadores, Flamengo ends the season with two trophies and guaranteed spots in the Recopa Sul-Americana and Supercopa do Brasil, in addition to the Club World Cup. The defender, who has a contract until December, spoke about all this, but without making it clear if he will continue at Rubro-Negro.

How does it feel to enter the list of Libertadores and Champions League champions?

“Thank God for everything I’ve experienced in my career. He has always supported me and given me the opportunity to compete for great titles. Joining such a select group is a reason for a lot of gratitude, because there were countless people who helped me and help me to be here , doing what I love, having the same oxygen as when I made my professional debut, aged 17, and with such a special title at the biggest club in America. To win this Tri, today I’m going to sleep and thank God a lot. I never imagined having the opportunity to win so many titles.”

Are you the one who scores Vini Jr at the Worlds?

“I hope not (laughs). First we have to have humility and feet on the ground that we have a lot to evolve and grow. This is not the time to think about the World Cup. reach the World Cup, Flamengo will have the ambition and humility, because we know that the semifinal will be very difficult. And then, who knows, maybe seek that title in the final.”

“To God it belongs.”

Previous Friends – In which episode did Julia Roberts and Jean Claude Van Damme appear?
Next movies from 10/31 to November 4, 2022

After having finished the group stage in first place in group G, the Brazil face …