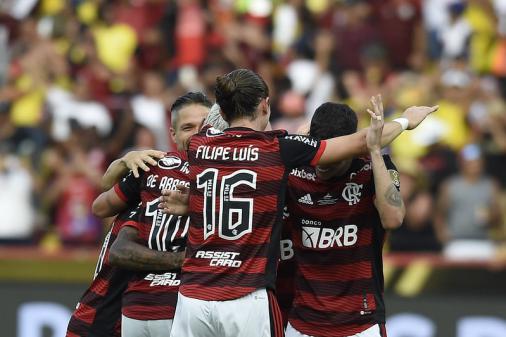 The celebrations for the titles of the Copa do Brasil and Libertadores are not over yet, but the board of Flamengoas of this Monday, work begins on the formation of the squad for 2023. Football vice president Marcos Braz said, still in Guayaquil, that the football department will evaluate the mistakes and successes made throughout the season to maintain the trophies in Gávea.

– The process is part of life. I am here today and tomorrow it will be another manager. We have already made a big window, with Cebolinha, Varela, Pulgar, national team players. Continue renewal to hold on to the titles we’ve won and fix the things we’ve done wrong. It’s not because we win two that we don’t make mistakes. The title belongs to the fans and the institution and we started to work thinking about 2023-he said.

ANOTHER YEAR FOR FILIPE LUÍS AND DAVID LUIZ?

Absolute holders and leaders of the squad, the experienced Filipe Luís and David Luiz are two of the athletes who have a contract until December. The two, of course, are in Flamengo’s plans for 2023. Until the last weekend, the speech was aligned: renewals would only be discussed after the decisions of the Cups. Now, the moment has come.

With Filipe Luís the initial idea is to extend the bond for another season. The 37-year-old side has the desire to end his career at the club and has a great relationship with the board, which indicates a simple resolution. David Luiz, 35, was more enigmatic when answering about the future – look here! – but also feel at home and well in the Vulture’s Nest.

One of the highlights of the Libertadores final, the left-back is on loan from Spartak Moscow (RUS) until December 2022. The club is interested in the permanence of Ayrton Lucas, who has a purchase option set at 9 million euros (about Rs. $47 million). The value is significant and the alternatives will be discussed by the board.

In the mixed zone after the victory over Athletico, Ayrton Lucas, who replaced Filipe Luís in the first half and was decisive, was interrupted by João Gomes during an interview, who reinforced the chorus for the side’s permanence: “Stay, Beijinho! I support! ” – look here!

THE FAREWELLS OF HISTORIC PLAYERS

On the other hand, three historic names from Flamengo must say goodbye to the club. The contracts of Diego Alves, Rodinei and Diego Ribas expire in December and, in different situations in their careers and within the team, the futures will be far from Ninho do Urubu.

Hired in 2017, the goalkeeper became a reserve and played little in the season. Something similar to the midfielder, who arrived at the club in 2016, and has even announced that he will leave Flamengo in December. With the qualification for the World Cup, the possibility of extending the bonds until the competition is in the air, but the direction has not yet positioned itself.

The right-back, on the other hand, is living his last months as a Flamengo player and should say goodbye on a high note, perhaps enjoying his best moment with Manto. Beloved by the squad, Rodinei is valued in the market, has already been sought after by other Serie A clubs and, after an impasse with the direction in the middle of the year, should breathe new air from January.

With revenues boosted by World Cup awards, Flamengo will have the investment capacity to reinforce the current squad. A few weeks ago, football vice president Marcos Braz spoke about a “overcontracting” in case of a Libertadores title, aiming at the Club World Cup, which was confirmed.

Oscar, Brazilian midfielder from China’s Shanghai Port, is a target after the failed attempt in the last transfer window.

Previous Check out 12 nostalgic movies to watch on streaming this Halloween
Next Remember them? Five Devices Used to Store Data Before the Cloud | Storages