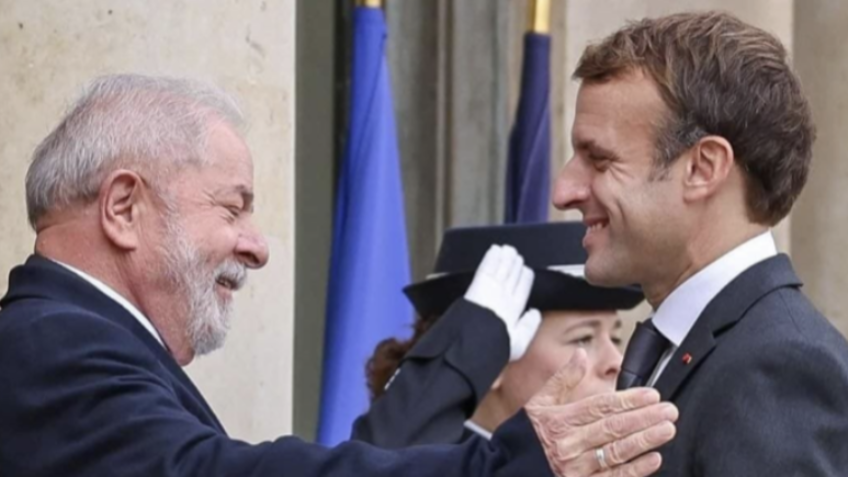 International leaders congratulate Lula on victory in the election

International leaders congratulated Luiz Inácio Lula da Silva (PT), 77, for winning the presidential race this Sunday (30.Oct.2022) against Jair Bolsonaro (PL). The elected candidate is the 1st in history to be chosen for the office 3 times by direct vote.

“Congratulations, dear Lula, on your election that begins a new chapter in the history of Brazil. Together, we will join forces to face the many common challenges and renew the bond of friendship between our two countries.”wrote French President Emmanuel Macron in his profile on twitter. 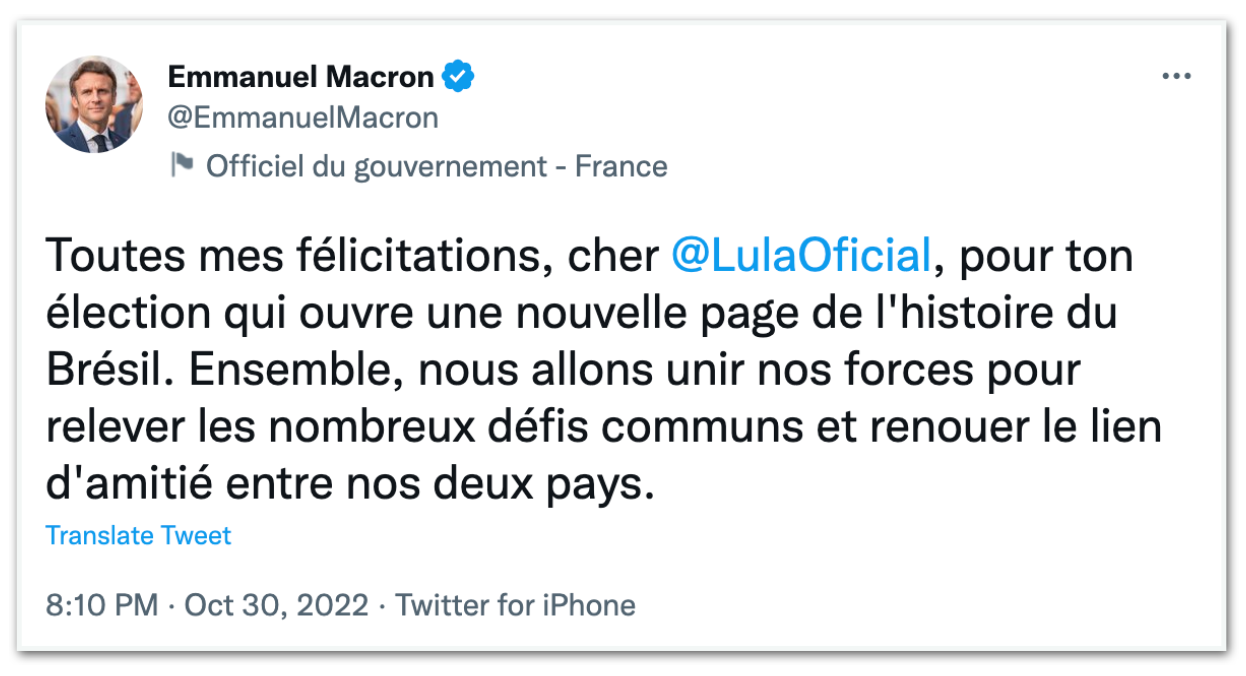 In a statement, US President Joe Biden congratulated Lula. “I look forward to working together to continue cooperation between our two countries in the coming months and years”wrote the American leader.

The US head of state also said that the elections in Brazil were “free, fair and reliable”.

US Secretary of State Antony Blinken congratulated the “[população] for exercising its right to vote and reaffirming the strength of its democracy”. Said, on your Twitter profilewhat “Looks forward to continuing the strong partnership with President-elect Lula as we build a democratic, prosperous and equitable hemisphere”. 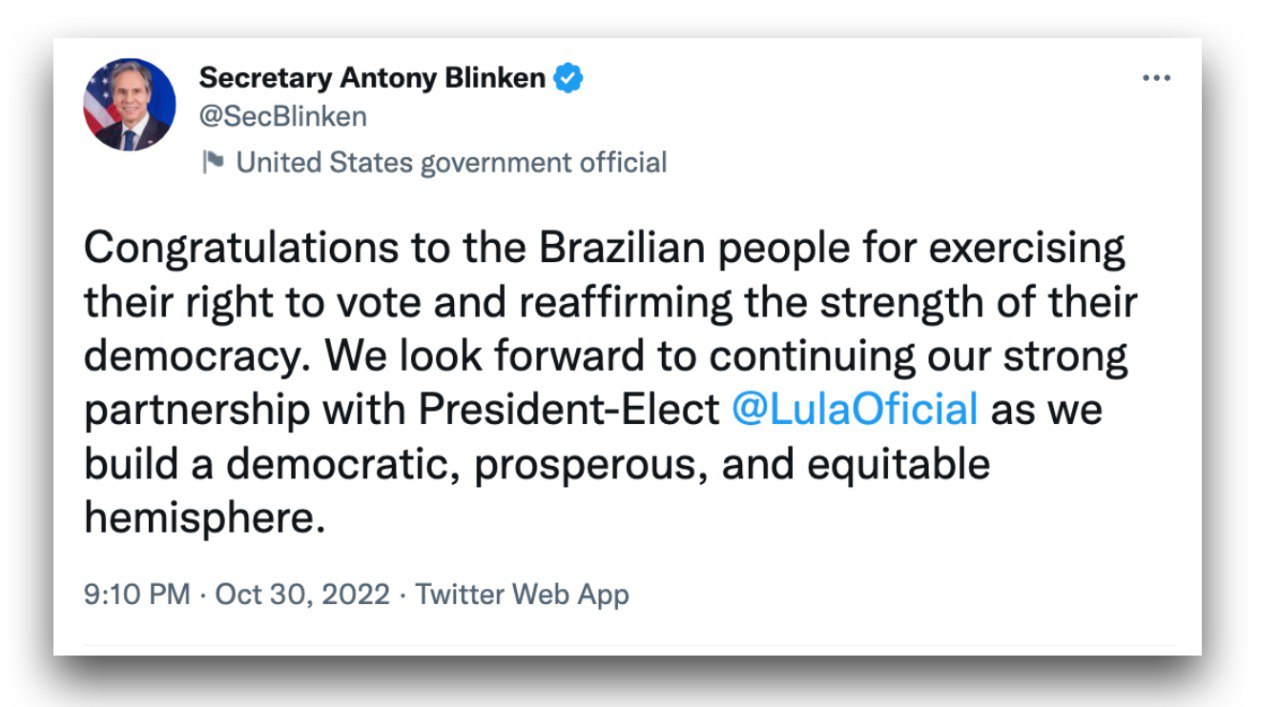 The Portuguese Prime Minister, António Costa, said on the social network that “has already had the opportunity to warmly congratulate Lula on his election as President of the Republic of Brazil”.

stated that “looks on with great enthusiasm to work together in the coming years, in favor of Portugal and Brazil, but also around the great global causes”. 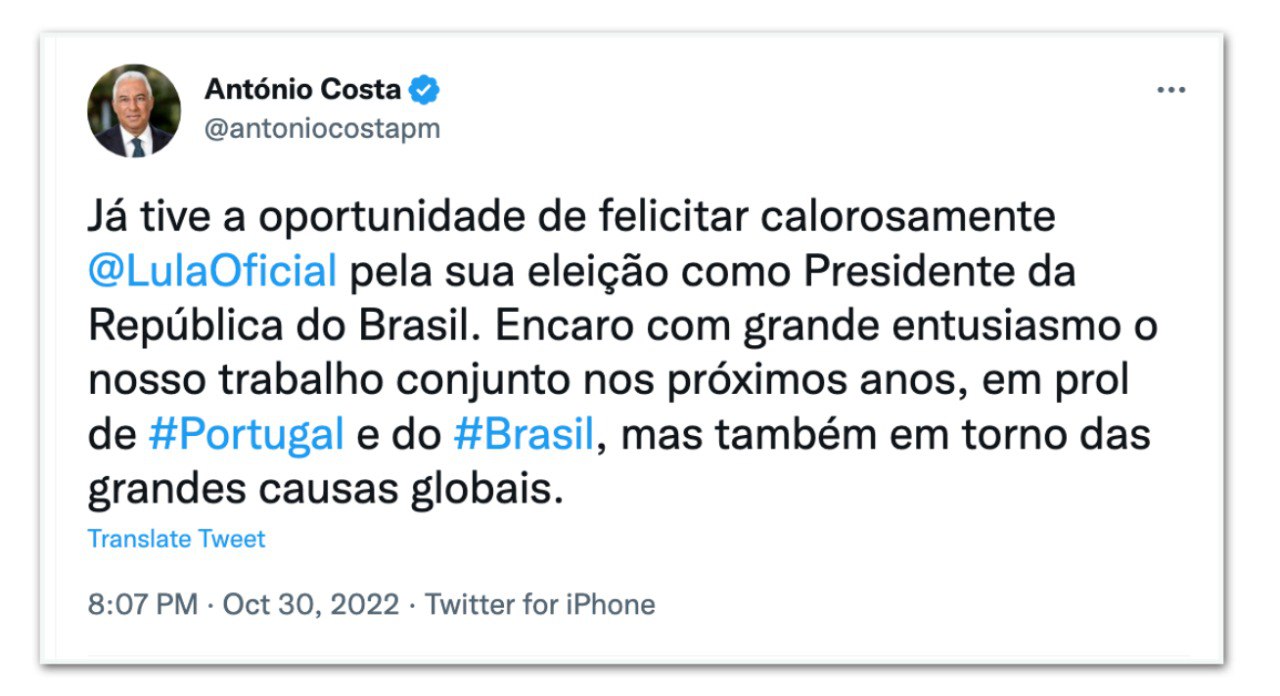 Canadian Prime Minister Justin Trudeau said on your Twitter profile “Looking forward to working with Lula to strengthen the partnership between the countries, deliver results to Canadians and Brazilians and advance shared priorities – such as environmental protection”.

Argentine President Alberto Fernández published on your Twitter profile that “victory [de Lula] opens a new era for the history of Latin America”.

“A time of hope and future that begins today. Here you have a partner to work with and dream big for the well-being of our [população]”wrote Fernández. 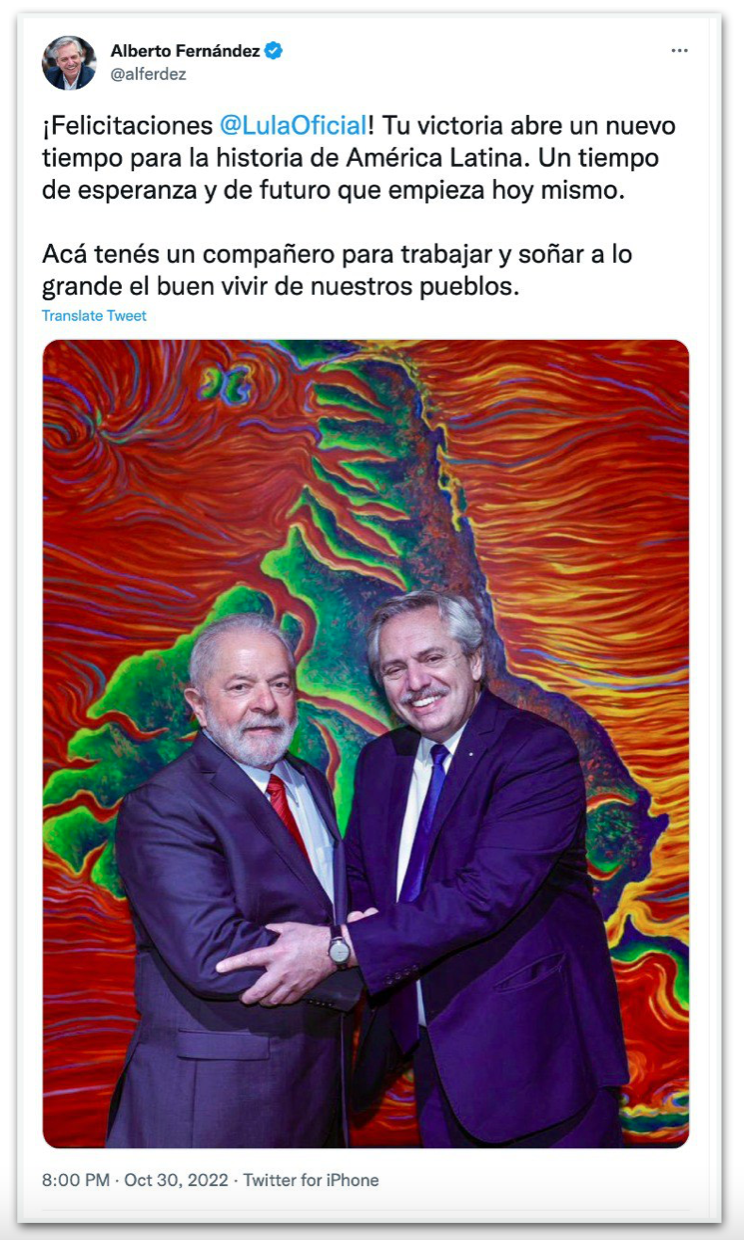 “Today more than ever, love and much happiness. Thank you people of Brazil. Thank you, comrade Lula, for returning joy and hope to our South America.”wrote Kirchner in his profile on twitter. 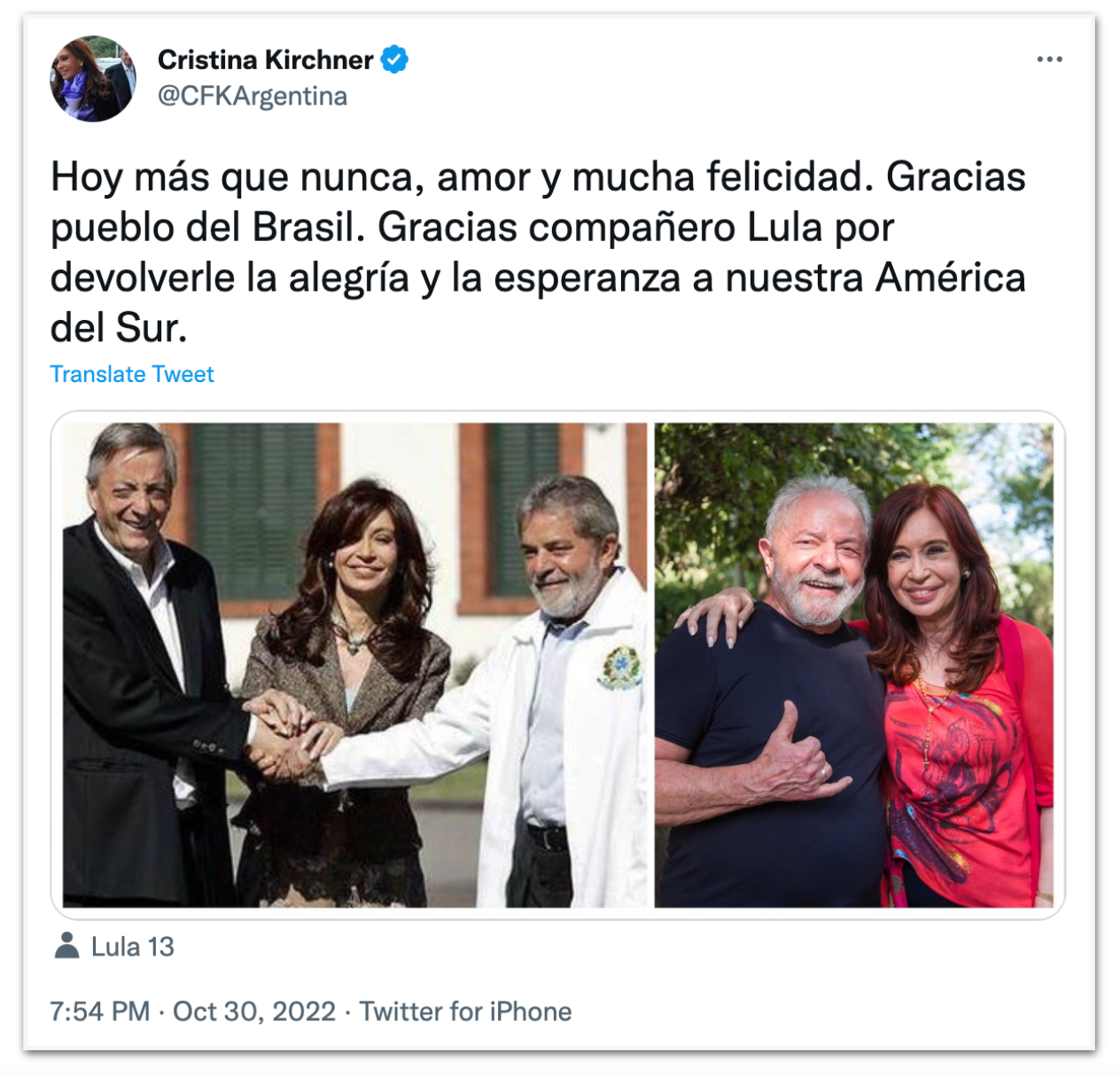 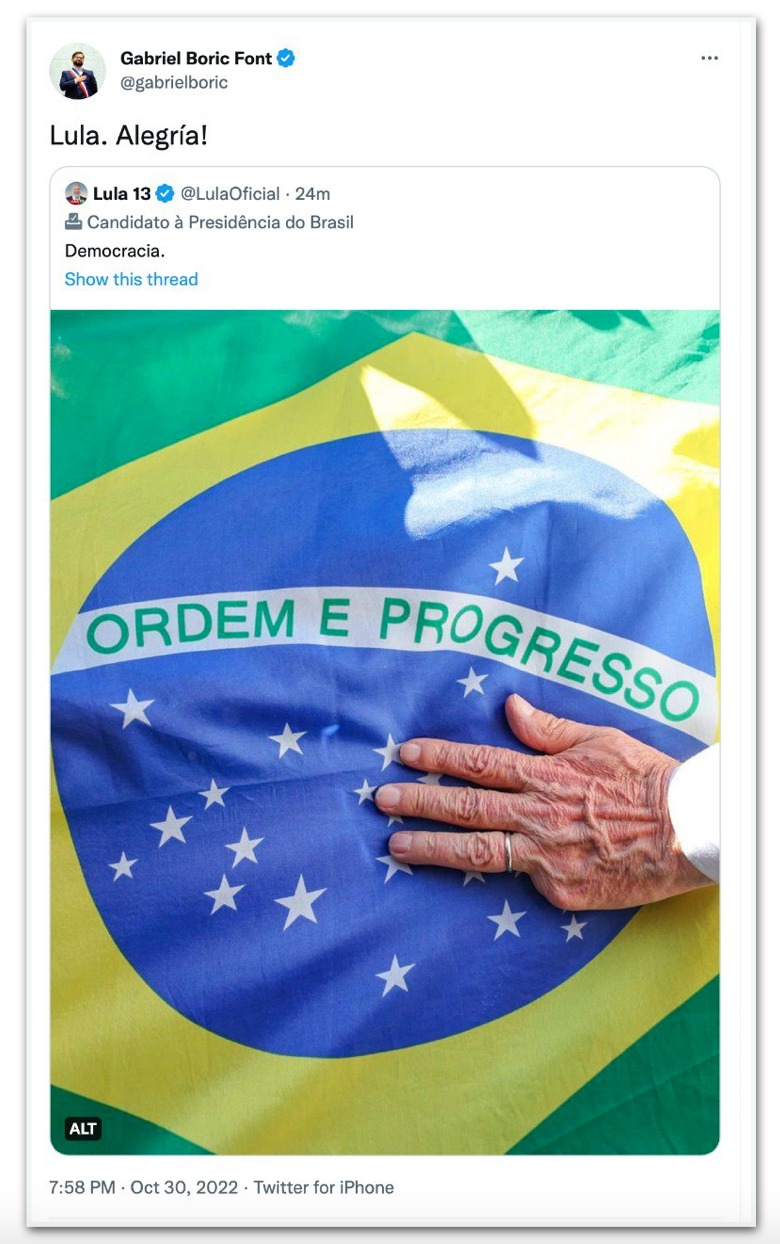 The president of Ecuador, Guillermo Lasso, also published a post about the PT’s victory. “In democracy, we will continue to strengthen friendship and cooperation between our countries, for better days for our citizens. Our region continues to integrate itself in the plurality”wrote Lasso on your Twitter profile.

Also on Twitter, Peruvian President Pedro Castillo, said that Lula is “worker, trade unionist and fighter”. called the PT “comrade” and stated that “its victory is essential to strengthen the unity of Latin America and the social justice of the Great Fatherland”.

The President of Mexico, Andrés Obrador, shared a photo with the elected presidential candidate. he wrote that “Lula won, blessed people of Brazil. There will be equality and humanism.” said on his Twitter profile.

Venezuelan leader Nicolás Maduro made a Publication celebrating “the victory of the Brazilian people who, this October 30th, elected Lula as their new president”.

“Long live the peoples determined to be free, sovereign and independent! Today, in Brazil, democracy has triumphed. Congratulations, Lulu! A big hug!”said Maduro on Twitter.

Uruguayan President Luis Lacalle Pou saluted Lula on your Twitter profile. He said he trusts the PT to “working for a modern Mercosur open to the world”. He declared that he expects “continue and improve the excellent bilateral relations” of countries.

Former Bolivian president Evo Morales congratulated PT on the victory on the social network. Said “make sure that [Lula] he will return to work for the poorest and restore his country’s dignity and sovereignty in foreign affairs. The Great Fatherland embraces you, brother!”. 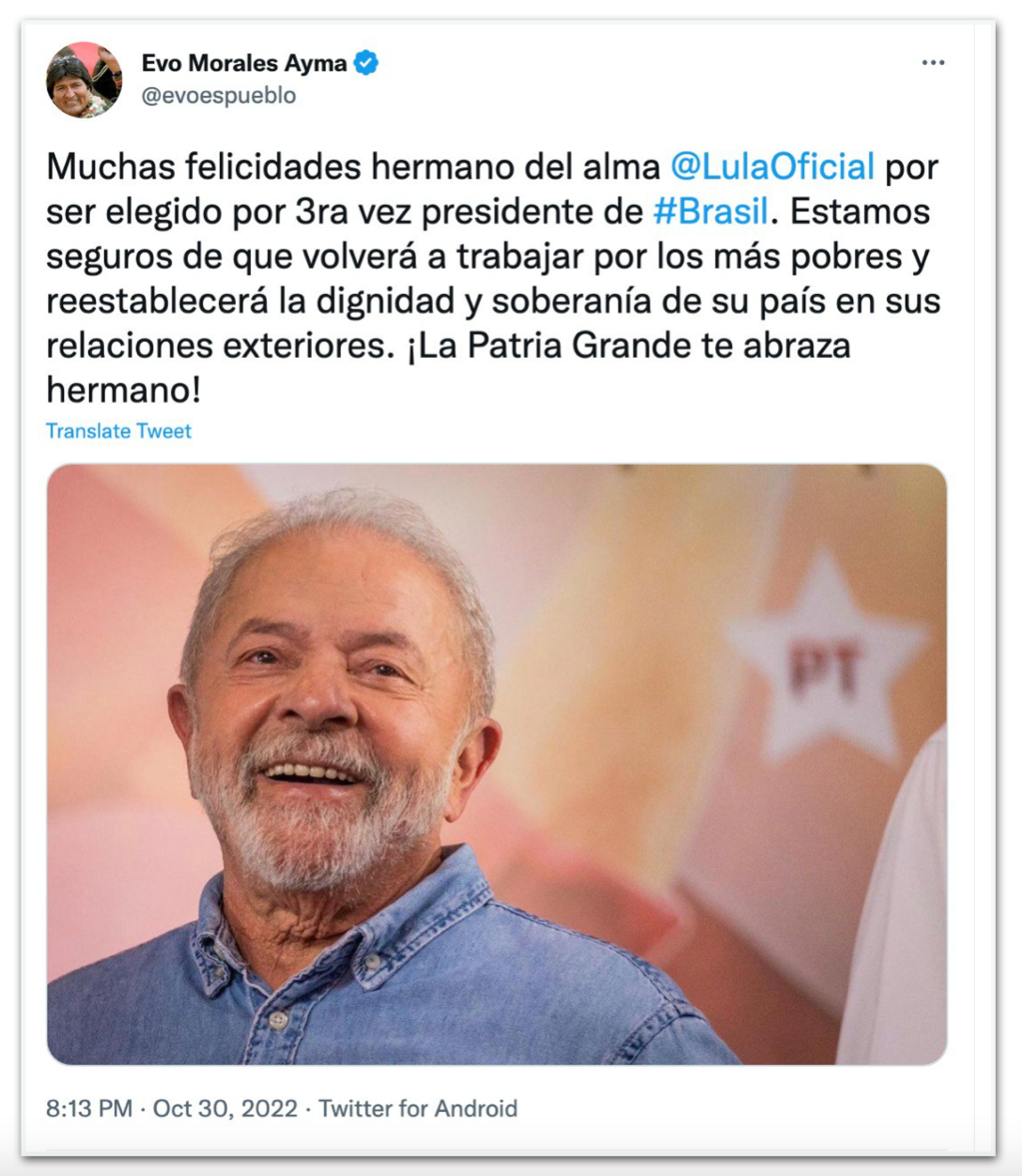 Previous Flamengo defender brings up chat about his future and Atlético Mineiro staff is warned: “I stress again…”
Next Brie Larson reveals her character’s name 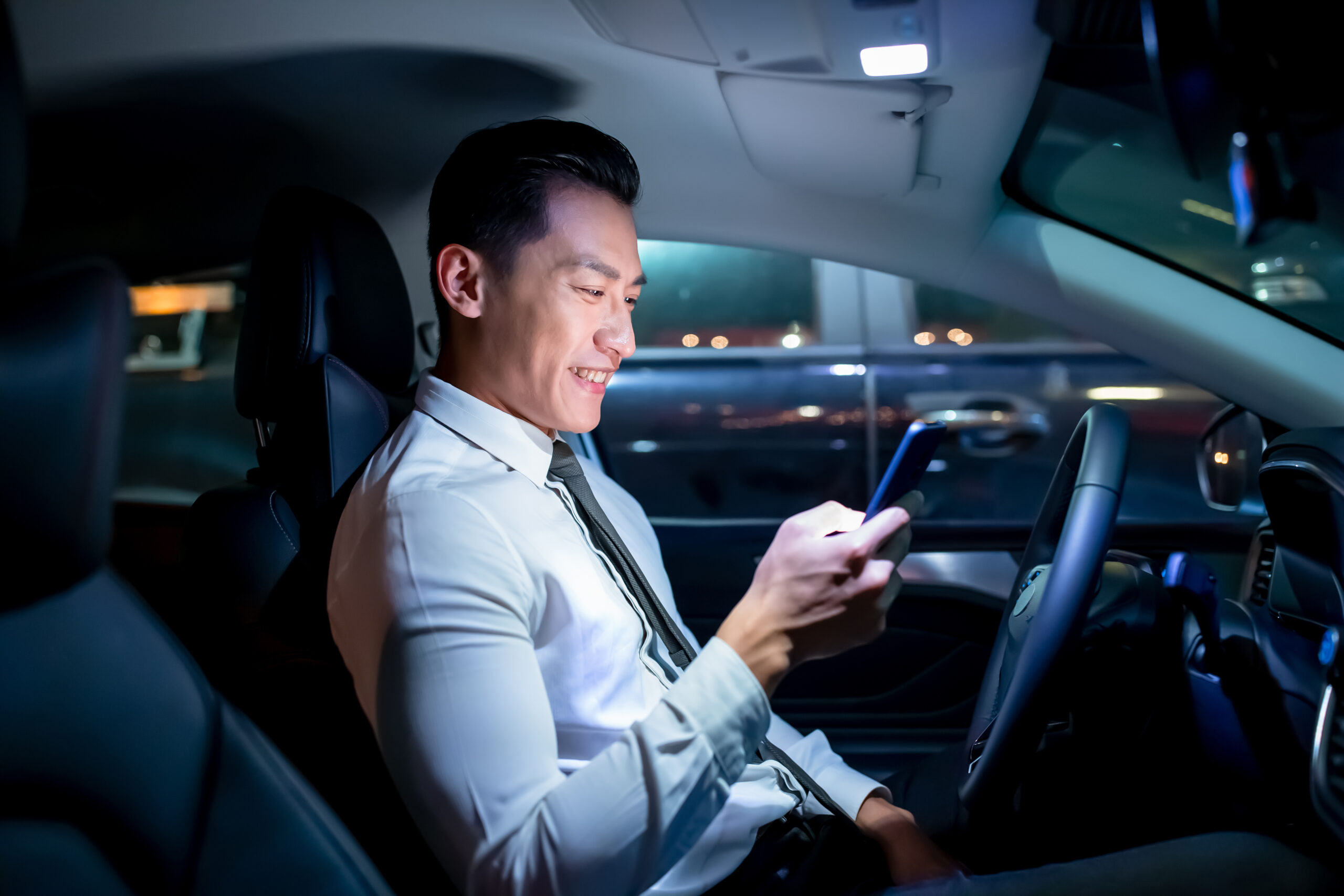 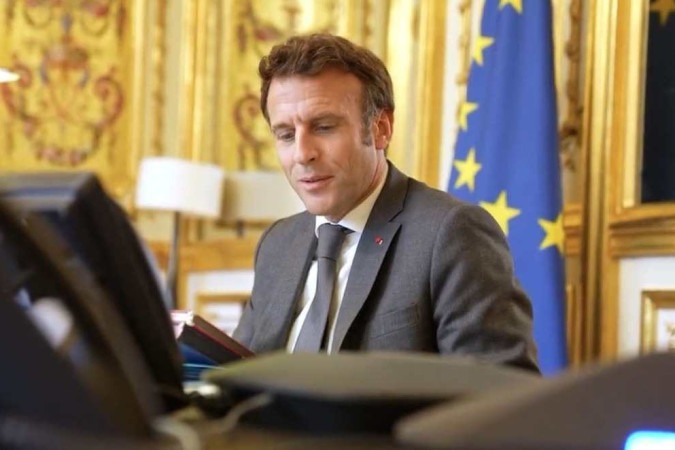