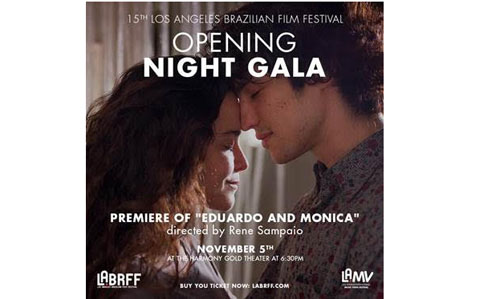 Rafael Maiolino comments on the shortlist for the Los Angeles Brazilian Film Festival, which celebrates its 15th edition in 2022

Among them the movie “Eduardo and Monica”, directed by Rene Sampaio and starring Alice Braga and Gabriel Leone

The Los Angeles Brazilian Film Festival, LABRFF, is considered one of the most important Brazilian film festivals abroad. The 2022 edition, which takes place from November 5th to 9th in the cinema mecca, celebrates the 15th anniversary of LABRFF and brings the theme Diversity, to discuss inclusion and belonging.

Among the selected features are: “Eduardo e Monica”, which opens the festival on a gala night. There are more than 30 films in the LABRFF program, starring names such as Cauã Reymond, Caio Blat, Guel Arraes, Jorge Furtado, Débora Bloch, Paulo Betti, Nelson Freitas, Juliana Alves, Carol Castro and Rocco Pitanga, among others.

Murilo Rosa and Cauã Reymond in the 2019 edition of LABRFF

Rafael Maiolino, who is in charge of marketing at LABRFF, comments that after a long period of adversity and instabilities, both in the world and in the film industry, the selection for the 2022 edition of the Festival is a must, with an established cast and directors and great surprises from independent producers.

The music video competition is also back, the Los Angeles International Music Video Festival reaches its 3rd edition. LAMV is a window for film directors and female directors and music artists to showcase their work in the Mecca of cinema. Also part of LABRFF are the content market fair, the BFM (Brazilian Film Market), and the organization of the BWIE (Brazilian Women in Entertainment), which has 300 Brazilian audiovisual women who live in several countries around the world. LABRFF 2022 integrates all these projects.

Caio Castro and Maria Casadeval in previous editions of

“I am proud to see our cinema growing, improving even more the quality and being able to face the great films of the world industry. It is important to highlight the streaming platforms, which expand access to our stories around the world, organically and quickly. Nothing makes me happier”, says Rafael Maiolino directly from Los Angeles, where he lives and is in charge of the executive production of another important festival: the Beverly Hills Film Festival. The 23rd edition of the event takes place from April 12 to 16, 2023 at the iconic Chinese Theater in Los Angeles.

From November 5th to 9th in Los Angeles – California – USA

“Eike? All or Nothing” – Dida Andrade and Andradina Azevedo

“Since Nobody Takes Me To Dance” – Ana Maria Magalhães

“The Artist and the Power of Thought” – Elder Fraga

“When I Close My Eyes” – Pedro Amed Mingardi

Founded in 2008 by film producer Meire Fernandes and journalist Nazareno Paulo, LABRFF filled a gap in the Mecca of cinema, becoming a showcase for Brazilian productions in Hollywood. The festival has already screened more than 1,300 titles, awarded more than 500 film professionals and contributed to the production of feature films in Brazil in partnership with the United States, in addition to having collaborated in the licensing of several Brazilian titles for American distribution majors. LABRFF has become the most prestigious Brazilian film festival abroad.

Previous Hundreds of people pay tribute to Mussolini in commemoration of the 100th anniversary of the ‘March on Rome’
Next Fan harasses reporter, Neymar in controversy and more: football news