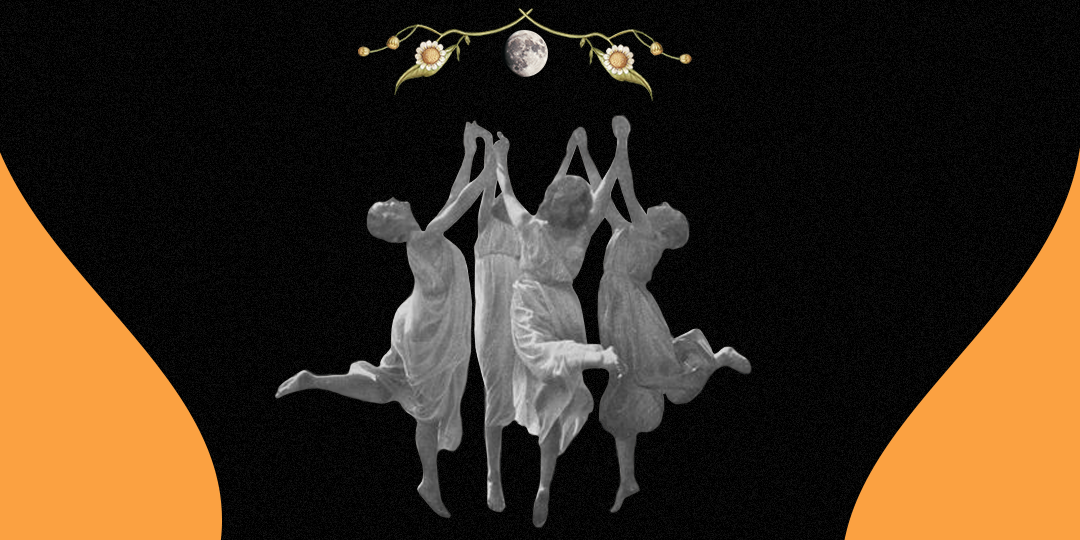 The anti-friendship in Yellowjackets, Young Witches, The Possessed and Hell Girl

In 2017, HBO released Big Little Lies. Centered on the suspense around women from a wealthy community, the series builds itself — and builds the bonds between its protagonists — through temporal comings and goings. Although she never hides that the crime presented in the first episode is what unites the group of friends, Big Little Lies intrigues because we want to know how things got to that point. Especially as the bond between women has become what it is under such unfavorable conditions. Because even if something dark is the connecting element between the characters, female friendship is portrayed as a welcoming space, which ensures that they don’t need to hide their true nature regardless of the traumas they carry.

In general, when relationships of this type are objects of interest in cinema and TV, they are approached through this prism. So it comes as a shock when we are exposed to programs like yellowjackets, in which the characters have been through trauma together but are terrible friends with each other because they are wrapped up in individual issues. So while they also agree on keeping what happened during the 19 months they spent lost after a plane crash a secret, they are not thinking of collectively protecting themselves, but rather of hiding something that could directly interfere with their present realities. . The watchword remains the survival instinct much more than empathy.

The most fascinating in yellowjackets it’s how brutality manages to surpass what we see in male stories with a similar starting point. But when the project was announced, many people were skeptical, since it is common sense that women talk when they are subjected to adversity, so that it would be impossible to reproduce acts of violence that were truly impactful. However, the showrunner Ashley Lyle was determined to dispel these criticisms by building a story that, perhaps, is about anti-friendship. Which makes perfect sense when you think about the way women are brought up to rival and see each other as antagonists.

The industry’s effort to deconstruct this issue is commendable and is present in 2022 productions, such as Pretty Little Liars: Original Sin. However, it does not eliminate years of social construction. Female rivalry teaches women to compare themselves to one another so competition is the only answer. This is linked to the sexist culture in which we are inserted and the way it requires women to always be the best versions of themselves in order to be taken seriously. Although these issues are closely linked to work environments, it is quite easy to observe them in other contexts. In yellowjackets, for example, the protagonists are part of a football team and are used to being seen as special and talented. So when an element gets in the way, some have no problem physically harming them to ensure they remain champions.

Despite the violence present in this type of behavior, there is nothing in yellowjackets that is more brutal than the friendship between Shauna (Sophie Nélisse) and Jackie (Ella Purnell). Still in their teens, the two are built on stereotypes: while Shauna is studious and observant, Jackie is the queen bee of the school and the captain of the team. The smart thing about the series is that it doesn’t go the usual way and chooses to tell the story from Shauna’s point of view, something that happens in several other products in the same niche. In fact, Shauna is just as pernicious as Jackie, and the relationship established between them is an anti-friendship, a contract between influencer and influencer in which both parties know the terms well and accept their role — but not without due resentment and occasional betrayals, which makes it impossible to root for either one when they directly rival each other.

What makes it possible to create such a harmful bond without yellowjackets end up falling into misogyny and portraying women as envious, is the horror element present in the series. He’s in every detail of the script, so the ritualistic allusions turn out to be the least frightening. What really causes fear is connected to what the series shows when it delves into the interior of its characters and the way they are willing to do anything to survive and to make that new society work. After all, the rules were considerably reversed and all of Jackie’s popularity became useless. Meanwhile, Shauna manages to stand out for being good at the tasks that would help keep the girls alive.

It is important to point out that although yellowjackets take the anti-friendship treatment a step further, this feature is nothing new in female-centric productions, especially in horror cinema. Still in 1996, the film young witches did an efficient job of illustrating how the bonds between young women can be a place that, while empowering, generate conflicts related to the need to establish dominance. Sarah (Robin Tunney) is the last to enter the coven composed of Nancy (Fairuza Balk), Bonnie (Neve Campbell) and Rochelle (Rachel True). In fact, despite being a natural witch, she has no idea that things like her room flooding were generated by some sort of power she carries. Still fragile after a suicide attempt and a malicious rumor spread at school, Sarah ends up finding a safe place in her friends and starts to trust that the magic used by them will be used for the benefit of all, without more serious consequences for the future. However, as soon as the interests of the “new queen bee” collide with those of Nancy, who held the post until then, conflict becomes inevitable.

And it also becomes inevitable that the bond begins to break down. Although Bonnie and Rochelle are much more of a follower, they end up taking Nancy’s side for fear of losing what they’ve gained through magic. So the three go on to bully Sarah and make her doubt her sanity so that she is unable to reverse everything the four did as a coven. So, in young witches friendship between girls serves to make them more confident and able to fulfill their own desires, but it is not enough for affection to be maintained when wills conflict because the very idea of ​​female rivalry is linked to the perception of others women as a threat. Therefore, there remains only the destruction of one so that the other can triumph.

These issues can also be seen in possessed. Ginger (Katharine Isabelle) and Bee (Emily Perkins) are two sisters who live in the suburbs and are seen as outcasts by the rest of the people around them. This is due to their obsession with death, something they share due to their desire to escape the boredom of a place that has little to offer them. One night, the two sneak out of the house to scare a girl at school, but Ginger ends up being bitten by a werewolf, which starts a change in her behavior. If before the sisters avoided being seen as objects of desire by boys, now, Ginger becomes aware of her physical attributes and starts to want to be noticed. This ends up creating a distance between her and the shy Bee, who ends up getting a little bewildered. This is because the relationship between them was never of two equals, but of influencer and influenced, so that Bee just followed her sister’s ideas without much questioning – including when the subject was the way each would take their own life when the girl. time to take that attitude had arrived.

As Ginger becomes increasingly empowered — and more violent — Bee is the one who must contain the damage caused by her sister’s animalistic fury. So, even if she is less noticed than in the first moments of the film, she doesn’t give up until she finds a cure, which serves to show that even when she could have relative autonomy due to being away from her sister, Bee still orbits around her because her dominance was so successfully established that she wouldn’t even know what to do with herself if that bond were broken. Something similar happens in a production released a decade later, Hell Girlwhich introduces us to Jennifer (Megan Fox) and Needy (Amanda Seyfried), two childhood friends.

While Jennifer is the cheerleader desired by every boy at school, Needy is a geek. This is established by the character herself, who narrates the film and says, even in the first scenes, that no one can understand why a “cat like Jennifer” would associate with someone like her. Needy is also the one who guides us through all the events that led to her imprisonment in a sanatorium. And from the first moments of Hell Girl we know it was her friendship with Jennifer that got her to that point. It is interesting to point out that at all times Needy is warned by Chip (Johnny Simmons) that she orbits around her friend and is constantly doing things she wouldn’t like just to please her, but Needy ignores these warnings as she believes the bond between the two is genuine. There are even speculations about the characters’ supposed bisexuality, something that would serve to keep Needy even more enchanted and hostage to Jennifer.

So, one of the best things about Hell Girl is your opening sentence: “hell is a teenage girl”. If we think of the idea of ​​hell as a space in which people suffer eternal punishment for their behavior, the phrase applies to all the mentioned links. Somehow, all the characters paid for their anti-friendships. The most obvious is to talk about Needy, who is perceived as a dangerous criminal after the final confrontation with Jennifer. However, the same applies to Nancy, who loses the match to Sarah and ends up in a psychiatric institution; and Bee, who has to do the one thing she wouldn’t want to stop Ginger and her trail of destruction.

In this way, horror cinema’s view of female friendship is less welcoming and more guided by a dynamic that women themselves are quick to deny. Perhaps in adulthood it is easier to distance oneself from this competitiveness and perceive female friendships in a less harmful way, but during adolescence these bonds can be quite destructive because some notions, such as sisterhood, are still being built. Furthermore, this is a phase of life marked by self-affirmation and the need to find their place in the world, so that the villainy of teenage girls is supported by the very idea that they need to learn to set limits and impose themselves from now on. so as not to be swallowed up by the world around them. Although there is room in the horror for products that go against the grain — such as Young Witches: New Sisterhood —, failing to discuss a certain topic does not make it disappear and, unfortunately, anti-friendships are everywhere. It only takes a quick look at your social circle to realize that, on some level, you harbor one.

** The featured art is by the editor Ana Luíza. To see more, click here!

Previous Mexico detects severe strain of bird flu on farm near US border | World
Next Botafogo x Cuiabá: Lower East sector is sold out for this Tuesday’s game