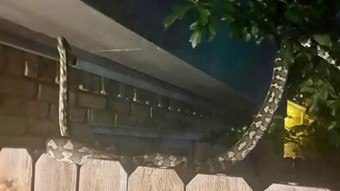 Gigantic, human-eating snake is on the loose in metropolis – News

A gigantic snake was seen strolling through a neighborhood of Houston, one of the largest metropolises in Texas. The animal, identified as a carpet python (morelia spilota), was caught by a surveillance camera in the Briar Forest Drive neighborhood and was never seen again.

Clayton Lee alerted other locals to the presence of the reptile, which can reach 4 meters. The council of residents of the region organized some searches, still without success.

The solution found by the residents was to put snake repellents on buildings and houses in the region, to prevent attacks and invasions.

“I was told they looked for the snake, were unsuccessful in finding it and put repellent on the 15 residential units that were closest to where it was seen a few nights ago,” Clayton Lee said in an interview with KHOU-TV.

Nic Louie, an expert at a local pet store, said, “This is definitely a pet snake.”

So far, the reptile remains at large. The carpet python is a species in the same family as the snake that devoured a woman in Indonesia.


In 2019, the city of Cambridge experienced a similar situation. Remember the case below!

Previous Click Games turns 20 and gets an updated version; access
Next Halloween 2022: See the costumes of celebrities – 10/31/2022 – Celebrities