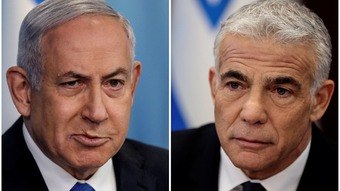 Israel: What’s at stake in the fifth legislative election in less than four years – News

Israelis are heading to the polls on Tuesday for their fifth legislative election in less than four years, at a challenging time that could mark the return to power of former prime minister Benjamin Netanyahu.

At 73, the longest-serving head of government in the country’s history is trying to win a simple majority among the 120 parliamentarians, that is, 61 deputies, alongside his allies from the ultra-Orthodox and far-right parties.

The most recent polls project 60 seats for Netanyahu’s “right-wing bloc”, against 56 for the current prime minister, centrist Yair Lapid.

Lapid established in June 2021 a “coalition of change”, which brought together parties of the right, left, center and an Arab formation, with the aim of defeating Netanyahu, accused of corruption in several cases.

A year later, however, the coalition lost its majority in Parliament with the departure of right-wing deputies, which led the government to call new elections.

In 2020, Israeli Arab parties won a record 15 seats with a joint campaign. But this time they are in contention with three separate lists: Raam (moderate Islamist), Hadash (secular) and Balad (nationalist).

In the Israeli proportional system, a list must obtain 3.25% of the vote to enter Parliament, with a minimum of four deputies. If it does not reach the barrier clause, the party is without a representative. Divided, the Arab parties may not achieve the minimum necessary and favor the victory of Netanyahu’s party and its allies.


The longest-serving prime minister in Israel considers that saving his country, from which he intends to regain the reins after Tuesday’s legislative elections, is his life’s mission.

At 73 years old, campaigning for his fifth legislative term in less than four years, Netanyahu has innovated this time and toured the country with the “Bibimobile”, a fully glazed and protected truck inspired by the Pope’s vehicle and which references his nickname, “Bibi”.

For the first time since 2009, he is not running as acting prime minister, after being ousted from power in June 2021 by a motley coalition.

The seasoned politician will never retire of his own volition, says Aviv Bushinsky, his former spokesperson and an expert in Likud, his party.

Despite the accusation of corruption in a series of court cases – which he denies – the politician has the unwavering support of his most faithful followers.

But if Likud doesn’t perform as predicted by the polls — about 33 seats, or the first force in parliament — its electoral base could crack, Bushinsky estimates. “There is no doubt that some Likud employees will ask him to step down,” he anticipates.

Contrary to the Oslo Palestinian-Israeli peace process, Netanyahu advocates a vision of Israel as a “Jewish State”, whose borders extend to Jordan. In this sense, he supports the annexation of the occupied West Bank, and his measures favored an increase in colonies.

He is also a career diplomat. He lived in the United States, where he studied and was ambassador to the UN in the 1980s. When he returned to Israel, he was elected deputy in 1988 by Likud, the big Israeli right-wing party, of which he quickly became the new star.

Netanyahu’s rise was unstoppable until 1996, when, at age 47, he became the youngest prime minister in Israel’s history. His rule, however, lasted only three years.
After being away for some time, he returned to politics, returned to lead Likud and was again elected prime minister in 2009.

The current Israeli prime minister and former television star has been trying since 2019 to rebuild bridges with US Democrats and Europeans, after more than a decade of the Netanyahu government, which aligned Israeli foreign policy with that of American Republicans.

On Lapid’s agenda are the question of renewing the decision on Iran’s nuclear program and the agreement between Israel and Lebanon — signed on Thursday — to delimit its maritime border and favor the exploration of gas fields in the eastern Mediterranean.

Founder and leader of the centrist Yesh Atid (“there is a future”) party, Lapid hopes to remain at the helm of the government after the legislative elections, although to do so he will have to form an even broader coalition than the one that defeated Netanyahu in 2021. .

Patriotic, liberal and secular, the prime minister is rejected by Orthodox Jews, Netanyahu’s main allies, with whom he insists on establishing ties.

In 2012, the movie star journalist left television to launch his party. He bet on an economic discourse focused on the problems of the middle class to impose himself on the political scene and make his young party become the second force behind Likud from the January 2013 elections.

Almost ten years later, after the 2021 legislative elections, he fulfilled the objective he set out to: to remove Netanyahu from power. For this, he formed with his friend Naftali Bennett (from the Yamina party, radical right) a coalition with parties of the right, left and center and, for the first time, an Arab formation. When the government succumbed, Lapid succeeded Bennet until the formation of a new executive after Tuesday’s elections.

Since coming to power, Lapid has maintained a steady pace of military operations in the occupied West Bank, giving the green light for a strong offensive against Islamic jihad in Gaza.
However, he declared himself in favor of negotiations based on a “two state solution”with a viable Palestine alongside Israel.

On the eve of the elections, Israel is on the alert for the risk of cyber attacks and interference campaigns from enemy countries, especially Iran.

The Ministry of Communications and the National Cybersecurity Authority are preparing to fight direct attacks against Central Election Committee servers and national infrastructure.

But there is another threat that raises concern: “the risk of foreign intervention” through influence campaigns, estimated Isaac Amit, chairman of the Central Electoral Committee.

“There are technical aspects, such as the attack on websites, and content issues, such as fake news or the delegitimization of results”, he added, and explained that in this case the objective is to “harm democracy”, by causing “schisms and suspicion”.

The elections are still taking place at a time of tension in the occupied West Bank, with two attacks carried out by Palestinians in recent days.

After a series of attacks against Israel in recent months, the army has carried out more than 2,000 operations in the West Bank. The incursions, which often provoke clashes, left more than 120 dead on the Palestinian side, the highest number of casualties in seven years.