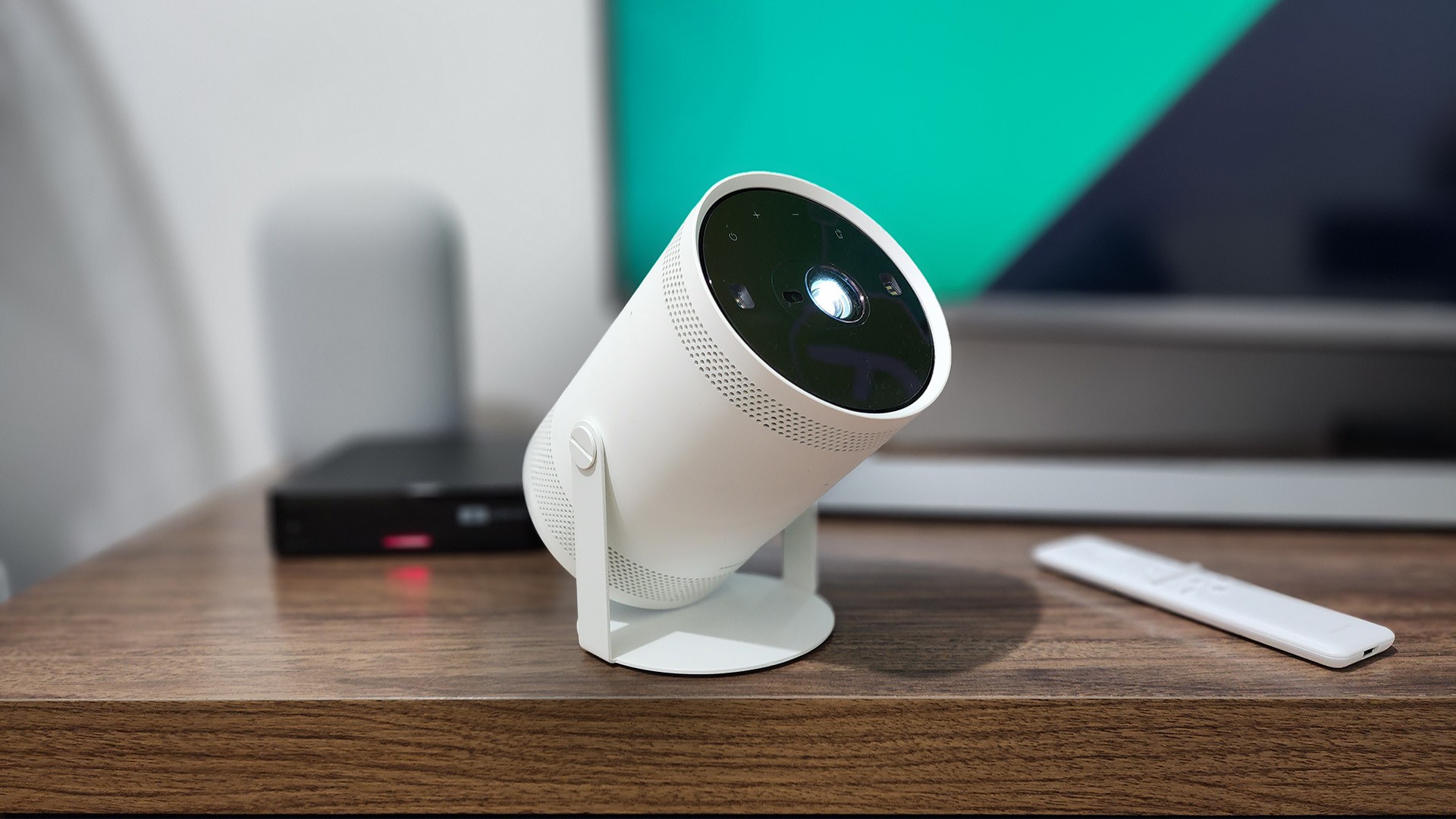 In April 2022, Samsung launched its new portable projector The Freestyle in Brazil. It targets young audiences to deliver a Smart TV experience with a compact body and the ability to take it wherever you want.

Does this product serve the user well in what it proposes? And what are the main features that it delivers in everyday use? TudoCelular tested a unit of it and tells all the details in this complete review. 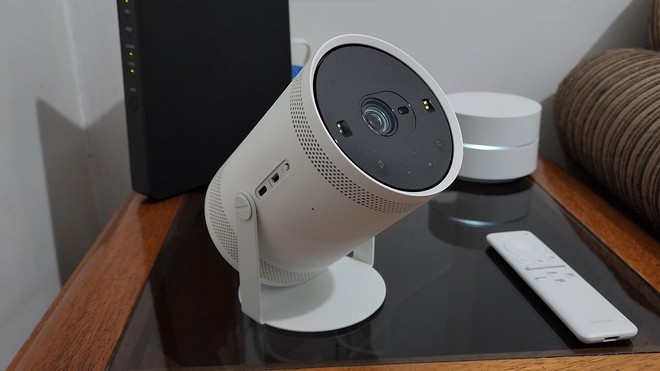 Starting with the design, we see a fairly compact size for a projector. He has a height of just over 17 cm and weighs only 830 g. That is, dimensions and weight enough for you to transport it in a backpack without great difficulties.

The device has a white cylindrical body, with metal construction and matte finish. There is a base to serve as a swivel support, as it can move at an angle of up to 180 degrees.

At the top, in addition to the lens for projection, you will find the two distance sensors, responsible for adjusting the image, and the touch buttons to turn on and off, adjust the sound volume or connect with a mobile device.

On the base, there are two pins for wall mounting and a magnetic connector for installing the portable battery, which is not included with the product. This is where the sound output is also located, but we’ll talk about that later. 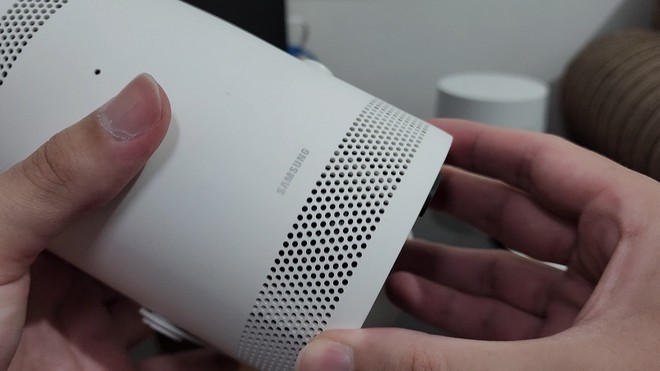 Along the circumference of the body, you will see several holes, responsible for the ventilation of the product. And know that it produces a lot of heat to be dissipated through these vents. In the middle, there are the micro-HDMI connectors, for connecting an external image source, and USB-C, where the power cable is plugged in, apart from the key to activate or deactivate the three microphones scattered around the projector.

As for the internal connections, the highlight is the dual-band Wi-Fi, which makes it possible to connect a 5 GHz network to it. Not to mention Bluetooth 5.2, in case you want to use a wireless headset to listen to the content being played. The user can still take advantage of the Bixby and Alexa assistants built into it.

Its box comes with the power supply, a USB Type-C cable, the manuals, the cover that protects the lens area and a remote control. Speaking of the accessory, the size is very compact and follows Samsung’s unique control pattern. In addition, there is an internal battery in it, which can be charged via the USB-C port.

If you prefer, you can also execute all commands through your cell phone, by connecting the projector to the SmartThings app. 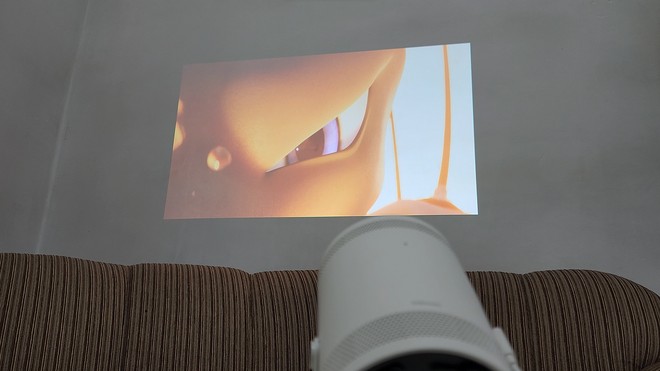 The Freestyle has its LED-based projection and provides a brightness of 550 Lumens. We felt some difficulty seeing the images with the room light on. If you have a smart bulb, you can dim the brightness so you can see better without having to be completely in the dark. But the ideal is to have the lights off.

Its image can go up to 100 inches, but for that you will need to position the notebook at a distance of almost 3 meters from the wall. We did a very close test to see what the generated size is. At about 35 cm from the wall, it was only possible to have a 12-inch image. That is, it is good to always keep further away from the projection site.

This model generates an image with Full HD resolution only. We understand that a modern product like this should come with 4K support, especially because compatible streams offer a wide range of content in Ultra HD, and the HDR10 already present in Freestyle could be much more explored.

At least, the generated image has vibrant colors and decent contrast. The projection uses the 16:9 aspect ratio, that is, the same aspect you will have on regular televisions. Its swivel allows it to project even to the ceiling, for easy viewing while lying down.

The device also has automatic image adjustment, which allows you to leave it at any angle, which it corrects itself to have straight edges. Sometimes this adjustment is not perfect, but just move the projector, for it to recalibrate. You can also manually configure either the base or the image size. 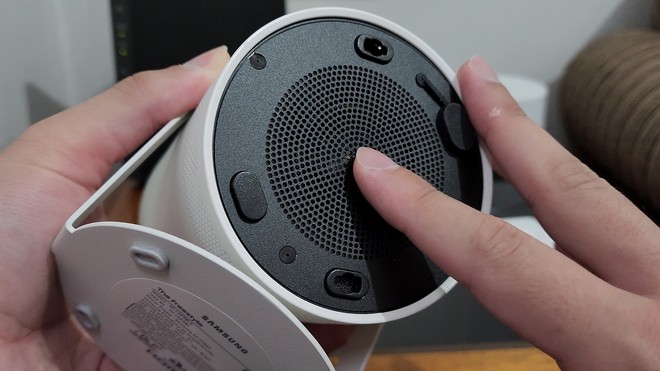 On the sound side, the speaker has a power of 5 W RMS. But don’t be fooled if you think that number is small. It surprises by delivering an experience that doesn’t fall short of conventional televisions. That’s thanks to 360-degree audio, which lets you hear sound from all directions.

Also, you can choose from different profile options in the system settings. You can leave something standard, a sound adaptable to any situation, or even the mode to amplify and gain more volume. At least the frequencies are well balanced, and the voices always come out crisp. 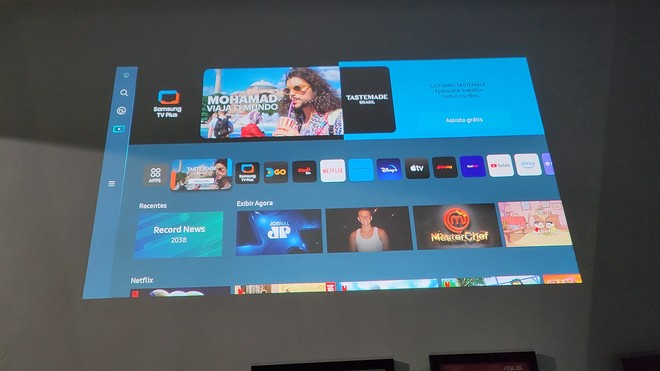 Freestyle comes equipped with the Tizen operating system natively. This means you can have an experience similar to what you find on Samsung Smart TVs. But there are some differences.

One is that the home screen is not accessible as a bottom bar on the screen. On this projector, the interface requires the exit of the app that is running, to see the other streams or enter the settings, for example. 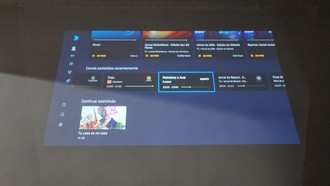 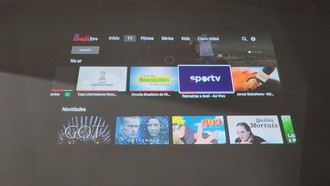 Despite this, you will find here all the applications available on a TV of the brand. Among the highlights, we find Netflix, Globoplay and Prime Video, for on-demand movies and series.

You can also watch live channels via streaming. Samsung TV Plus is integrated into the system, to provide you with free options. But there are also paid solutions, such as DGO and Claro TV Mais. 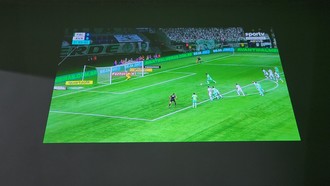 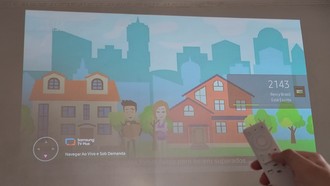 Perhaps this is where the experience is most like a traditional TV. That’s because in on-demand streaming, you won’t be able to explore as much as a title can deliver, due to the absence of 4K. But the live channels are already limited to Full HD, which makes this device a good alternative to see your favorite team play on a big screen, for example.

Freestyle is not just about projecting movies, series and live channels. It also contains an ambient mode, to leave some image or phrase on the wall as decoration. Also, you can put the cover over the light outlet while the projector is on. Thus, you will have a very powerful lamp to light up your room.

It is still possible to connect any console or PC to it through the micro-HDMI port. You will inevitably need an adapter or a cable of your own, which does not come in the product’s packaging.

And speaking of what doesn’t come with it, there’s its own external battery. But calm down, there is a solution here. Freestyle also works when connected to a power bank. This makes it easier to use the projector away from the power outlet, even for a shorter time. 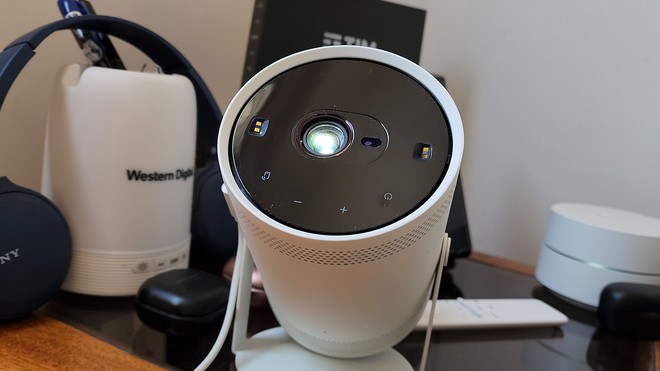 The Freestyle projector is clearly a product that meets the contemporary demands of young people. It provides access to streaming services and live internet TV platforms. In addition, it allows the user to use it at a party with ambient mode, or even as a lamp.

This versatility makes the Freestyle a unique model on the market right now. Not to mention the presence of the Tizen system in a complete way, and the sound that surprises for its power and quality.

But the product has its caveats. One of them is the low brightness, which will always require a dark place to get a decent view. The other is in Full HD image. A product released in 2022, with the ability to output up to 100 inches, should at least be able to reach 4K resolution.

The micro-HDMI port is another difficulty, as your regular cable won’t be able to plug a PC or video game console into it. And since it doesn’t come with an adapter in the box, you’ll have to shell out more for that.

At least, you can connect it to a power bank to use it away from the outlet. It is an interesting way out of the manufacturer to not need to buy the external battery of the device itself.

The Samsung The Freestyle arrived in Brazil for a suggested price of R$7,000, but it can already be found for something around R$4,000 in the domestic market. It doesn’t seem to be the type of product to be massified among consumers, but it serves the target audience who wants to have a TV experience, in a compact and easy-to-carry body.

And the lack of similar competitors makes it difficult for a possible greater drop in cost in the future, which requires spending more than it can be worth in practice to have a product with these characteristics.

What did you think of Freestyle? Thinking about buying one for your home? Please reply in the space below.

Previous Without Alan Kardec, Atltico discloses related to the game with So Paulo
Next Jennifer Aniston: “Nobody has any idea why I don’t have kids” | Entertainment