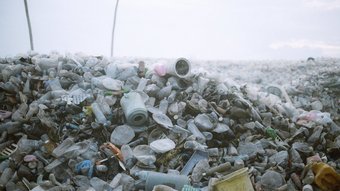 Plastic recycling is nothing more than a ‘myth’, reveals NGO study

A study carried out by the NGO Greenpeace of the United States showed that only 5% of the country’s plastic waste was recycled in 2021. The report, released on the 31st, shows that, despite the increase in plastic production, the recycling of material only decreases.

The study, titled “Circular Claims Fall Flat Again,” claims that the industry-created concept of a circular economy is not being put into practice — and is ultimately a “myth.” “.

In 2021 alone, in the United States, 51 million tons of plastic waste were produced, but only 5% of this amount was recycled, that is, 2.4 million tons. That’s a much lower number than the peak reached by the country in 2014, when 10% of the plastic produced was recycled.

The dwindling recycling numbers were also significant after China stopped receiving plastic waste from the West in 2018.

The numbers are even more frightening if we take into account that the US is the country that pollutes the most with plastic — more than the entire European Union, and twice as much as China, also an industrial superpower.

The concern becomes even greater when taking into account that the production of virgin plastic, without any recycling process, increases as the petrochemical industry expands and lowers costs. In other words, research has shown that it is currently cheaper to produce virgin plastic than recycled plastic.

It is worth remembering that the composition of the plastic comes from resins derived from petroleum; therefore, the production of the material is directly linked to the petrochemical industry.

Research by Greenpeace also shows that at the 375 U.S. materials recovery facilities, only two types of plastics are widely accepted for recycling in the country — polyethylene terephthalate (PET), which makes up soda and water bottles, and polyethylene. density (HDPE), present in cleaning products and shampoo containers.

Even accepted materials are not necessarily recycled at acceptable rates. PET plastic had a 20.9% recycling rate, and Pead only 10.3%, in 2021. These numbers represent a slight decrease from 2020.

The other five types of plastic are not accepted and reach a recycling rate of less than 5%. This “flaw” is explained by the lack of recycling facilities available to the majority of the American population. Also, the products collected from these other types are not used much for the manufacture of new items.

The study also presented the top five reasons why plastic recycling is what has been called a “flawed concept”. The first point is the difficulty of collecting the immense tons of material, because it is difficult to divide the seven types of plastics, which require different recycling processes.

“It is functionally impossible to separate the trillions of plastic waste produced each year,” the study states. Even recycling is also harmful to the environment and exposes workers to toxic products.

Recycled plastic can also be toxic because of contact with other types of plastic in collection bins, which prevents the new material produced from being used in food products, for example.

And finally, the recycling process is extremely expensive, and it becomes even more costly when you consider the trillions of plastic products that could be processed. “New plastic competes directly with recycled plastic and is much cheaper to produce and of higher quality,” the report adds.


THE IMPACTS OF PLASTIC ARE IMMENSE! SEE ALSO: Scientists discover that plastics are ‘glued’ to the oceans

Previous “R$ 660 thousand/month”; Flamengo offers 2-year contract and can sign with striker after ‘yes’ from Dorival Júnior
Next What will Lula’s foreign policy for Latin America look like?