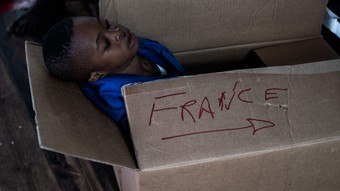 A migrant child was found inside a cardboard box with the word “France” on board the humanitarian ship “Ocean Viking”, which docked this Friday (11) at the military port of Toulon, in southern France, with 230 migrants. rescued in the Mediterranean off the coast of Libya.

The humanitarian ship “Ocean Viking” docked this Friday (11) at the military port of Toulon, in southern France, with 230 migrants rescued in the Mediterranean, off the coast of Libya.

After three weeks at sea, in an unsuccessful search for a safe harbor in Italy, the “Ocean Viking” arrived at the pier in France around 8:50 am (4:50 GMT) and “its passengers began to disembark”, declared the mayor. of the region, Event Richard.

This is the first landing in France by a rescue ship helping migrants in the Mediterranean, following a diplomatic clash with Italy, which has refused to open its ports.

“There is a lot of emotion on board, everyone is very, very tired, but relieved to get to land. It’s the end of an ordeal,” Laurence Bondard, from the NGO SOS Méditerranée, which operates the ship, told AFP.

The “Ocean Viking” initially sought to dock on the Italian coast, the closest to where the migrants were rescued. Italy, however, refused, arguing that other countries should take on more responsibility for receiving migrants trying to reach Europe from North Africa each year.

“It’s an exceptional case … taking into account the 15 days of waiting at sea that the Italian authorities made passengers suffer,” French Interior Minister Gérald Darmanin said on Thursday.

The minister criticized the “incomprehensible” behavior and contrary to “international law” of Italy, led by a far-right government, and warned that there will be “consequences” in bilateral relations.

For her part, Italian Prime Minister Giorgia Meloni denounced an “aggressive, incomprehensible and unjustifiable” French reaction, recalling that her country welcomed nearly 90,000 migrants this year, while European countries that had committed to taking on 8,000 people received only 117.

SOS Méditerranée spokeswoman Meryl Sotty told AFP that a doctor climbed aboard before the ship docked to identify the most vulnerable passengers for priority disembarkation, followed by children, women and families.

The migrants, including 57 children, will be taken to an international holding area to await the processing of their asylum applications.

“Those who do not obtain asylum will be transferred directly from the waiting room to their home country,” Darmanin said.

An AFP journalist watched military buses enter the port to transport the migrants.

Nine European countries will welcome two-thirds of the immigrants, according to Darmanin, with the remaining third staying in France.

Germany will receive “more than 80”, while Croatia, Romania, Bulgaria, Lithuania, Malta, Portugal, Luxembourg and Ireland will contribute in the name of “European solidarity”, he detailed.

In retaliation for Italy’s stance, France suspended a plan to host 3,500 refugees currently in Italy as part of a European migrant-sharing agreement, and urged Germany and other European Union (EU) countries to do the same.

French police announced on Friday that they had tightened controls at several border crossings with Italy.

France considers that, on the basis of international maritime law, Italy should receive the “Ocean Viking”.

But Italian Foreign Minister Antonio Tajani said this week that he was sending a signal to EU countries that they should help Italy more with the issue of receiving immigrants.

Under international law, ships in distress or with rescued persons must be able to dock at the nearest port. This implies that Italy and Malta are the landing grounds for most migrants departing Libya.

In June, a dozen European countries, including France, agreed to accept immigrants from Italy and other countries.

For Tajani, Rome’s reluctance is aimed at pressuring the EU to play a more active role. He wants “an agreement to establish, on a population basis (in each country), how to relocate migrants entitled to asylum”.

Since the beginning of the year, only 164 have been transferred from Italy to other countries, which Rome considers insufficient. Since January 1, more than 88,000 people have reached its shores.