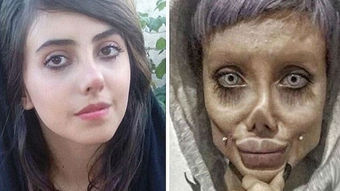 ‘Where is the zombie Angelina Jolie?’, ask fans almost two years after influencer gets out of prison – News

In mid-2017, Iranian Fatemeh Khishvand — also known as Sahar Tabar — caused a stir on Instagram and Facebook. The reason was her bizarre look in the photos, which earned her the nickname “Angelina Jolie zombie”.

Fame has earned him a long journey: rumors about his life, prison and Covid-19 are just some of the documented moments. But after she got out of prison in 2020, many began to wonder where the influencer was, who disappeared from the internet.

Since Sahar lives in Iran and has never revealed many details of her own life, a series of rumors soon surfaced—some encouraged by herself. The famous would have had 50 plastic surgeries banned to get a skinny and scary face. Another gossip said she was addicted to drugs.

But Sahar’s story was simpler than it sounds: she just liked the Hollywood actress and used a series of filters, plus heavy photo editing, to look scrawny.

It wasn’t until July 2018 that we got to know her true face, and each revelation made her more famous — Sahar had almost half a million followers on Instagram.

The young woman considered her performance on social media “as a kind of art”. But that was not the understanding of a court in Iran, which sentenced her to ten years in prison in October 2019 – for “cultural crime and moral corruption”. At the time, she was just 22 years old.

The heavy penalty and the denied bail caused many people to protest in the country, alleging unfair treatment, as prisoners under similar penalty managed to be released.

In prison, she caught Covid-19 and even gave an interview to state TV, where she said she always only sought fame. After the video was released, many people questioned that the interview was part of a campaign to humiliate the online personality.

Sahar was released from prison in December 2020 and has never been seen online again. On Instagram, fake accounts try to piggyback on her success and get thousands of followers, using old photos of the influencer. The main one has more than 32 thousand followers.

On twitter, some said who are still “haunted by the story” of the influencer. Another comment showed sadness for not knowing what happened to her.

I wish I knew what happened to her. Her instagram account dela was scrubbed clean I do n’t even think she’s alive it’s terrifying

The exact reason for her disappearance is unknown, but Sahar herself had already told a state TV agency Rokna at the end of 2020 that she no longer intended to appear online. The interview was criticized by human rights activists and classified as a “staged confession”.

Some human rights activists have speculated that the end of her virtual life may be part of a deal with Iran’s justice system for her to be released from prison before the end of her sentence.

With all these clues, it’s highly unlikely that we’ll officially see Sahar Tabar again as the strange character she created.


In 2019, the influencer shocked fans with a photo on top of a stretcher, and even said: ‘I broke my neck’. REVIEW BELOW!

Previous US elections: why are final results taking so long?
Next Scarpa’s successor? Meet the title hero in the under-20