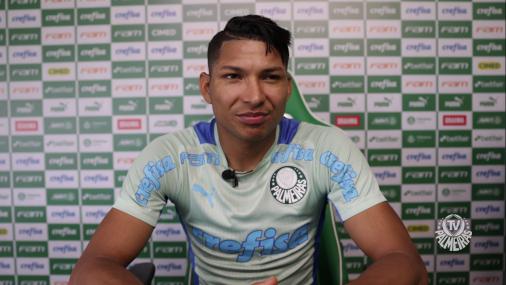 Highlight in Palmeiras’ title, Rony reveals Abel’s request for the last game of the season

This Saturday morning, Palmeiras finished their preparation to face Internacional this Sunday, at 4 pm, in Beira-Rio, for the last round of the Brasileirão. When projecting the match, Rony revealed a special request from coach Abel Ferreira for the end of the season.

– That’s what Abel said, we have a game tomorrow to finish the season well. The thought will be that, going to the South to play a great game and leaving with the victory to end the year with a golden key. Let’s do our best, which is what the teacher asks. It is to enjoy the last game of the Brasileirão-revealed it.

The team’s top scorer in winning the Brazilian, with 12 goals, and top scorer of the squad in the season, with 23 balls in the net in total, Rony took stock of another successful season for Verdão and said he hopes that next year will be even better.

– I believe it was a great season, everyone is to be congratulated for the work we did during the year. We reap the fruits we sow. I believe that the group, the technical committee, the board, the entire Palmeiras Family that works here are to be congratulated. We hope that next year we can achieve even more. After the last game, rest and come back firm and strong to win big things again next year – he said.

The last training session of the season, held this Saturday morning, was attended by approximately 200 Avanti members and club members, the vast majority being children. As he was one of the players most “tietado” by the child fans, the shirt 10 of Verdão took the opportunity to conclude by thanking the affection.

– We were fortunate to have some of our fans present, children. We know the importance of the affection they have for us and we for them. We were certainly very happy to have them around and to end with a flourish, the last training session of the year. We hope to have made them happy, children are affectionate and the affection they give us is priceless. I have a son at home and I know what it’s like,” he concluded.

Previous Not Okay and Spree: who are we and how many internet followers define us?
Next OPPO Reno 9, 9 Pro and Pro Plus: design confirmed by leaked renders