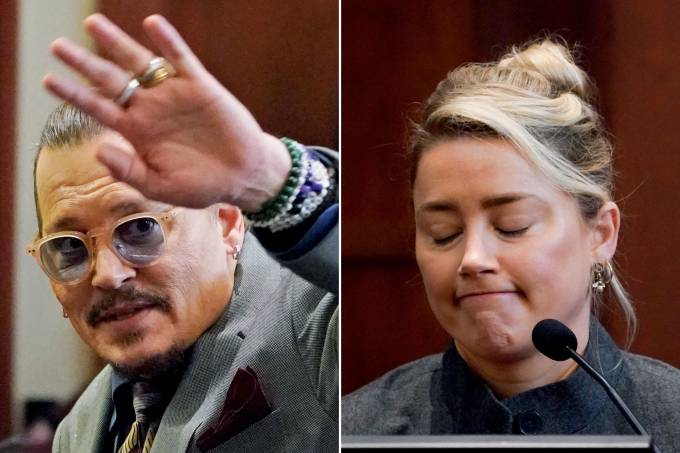 Despite officially coming to an end, the legal battle between Johnny Depp and Amber Heard can gain new developments. On Monday, the actor’s lawyers argued that the $10.35 million libel verdict in his favor should be upheld, despite the possibility that one of the jurors who appeared in court was in the wrong. Heard’s lawyers say the result should be overturned and a new trial held because one of the seven jurors in the case never received a subpoena.

According to a memo prepared by Depp’s ex-wife’s legal team and released on Friday, the jury subpoena was sent to a Virginia resident in April. However, according to the same file, published this Monday, it appears that there are two people who live at the same address with the same last name – one aged 77 and the other, 52 years old. What Heard’s lawyers argue is that the first was summoned, but it was the second who appeared at the trial, compromising the verdict. “Thus, the 52-year-old man sitting on the jury for six weeks was never called to serve as a juror on April 11 and did not ‘appear on the roster’ as required,” the lawsuit reads.

Unnoticed by officials or officials, Amber Heard’s team raises the possibility that the younger man was never asked to produce documentation or was shown a false ID. Another point mentioned was related to the online form required by the judgment. There is a chance that the man intentionally or accidentally filled in the wrong date of birth.

Johnny Depp’s legal team claims that Heard has not been shown to have suffered any kind of harm due to the error and that he lost the right to challenge the jury’s decision for not having raised this issue sooner. “Unsurprisingly, Ms. Heard cites no case law to support his argument that the service of Juror 15, if he is not the same individual the Court designated as Juror 15, in any way compromised its due process and would justify the drastic remedy of ‘setting aside the verdict and order a new trial,'” the actor’s lawyers wrote.

It is not the first time that the actress of aquaman attempts to overturn the trial verdict against Depp. Heard’s team claimed that her ex-husband made improper arguments during the trial and tried to hold her accountable for the domestic violence allegations made in 2016 – which the actor waived to contest them in the divorce settlement. Johnny Depp sued Amber Heard for defamation over a 2018 editorial she wrote for the newspaper The Washington Post claiming to have suffered domestic violence. After weeks of a bitter court battle that dominated the media, the court ruled on June 1 that Depp had been defamed and that Amber Heard should pay him $10.35 million. She also received a $2 million counterclaim from the actor over the allegation that his lawyer defamed her.

By subscribing to one of the Abril titles, you also have access to the digital content of all the others*
Quality and reliable information, just a click away.

Previous What is it and how to delete Windows.old folder
Next Giant of Brasileirão is interested in Alef Manga’s football; Coritiba asks for BRL 40 million