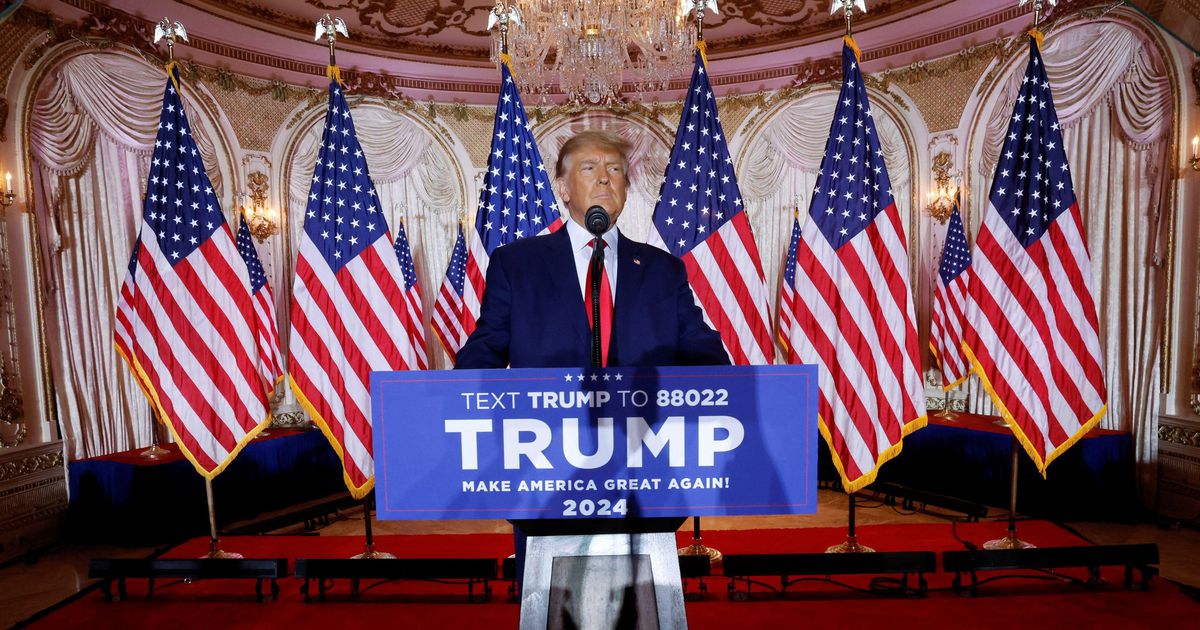 MAR-A-LAGO, USA – Former US President donald trump launched this Tuesday, 15, his third candidacy for the presidential election of 2024. He announced his intention to run for the third time for the White House in a speech at the mansion of Mar-a-Lago, his property by the sea in Florida , shortly after registering his candidacy with the Federal Election Committee.

“Two years ago, when I left office, the United States was ready for its golden age,” Trump said in his speech, before listing disputed accomplishments on how he handled the pandemic and the country’s economic recovery.

With the decision, Trump ignores appeals from within the Republican party to backtrack due to the poor performance of candidates loyal to the tycoon in the mid-term elections. Dozens of supporters with T-shirts, caps and flags in honor of the tycoon wait for hours.

His unusually early announcement was prompted in part by a calculation that a formal candidacy might help shield him from multiple investigations into his attempts to cling to power after his 2020 defeat. congressional races that will determine the balance of power in the House.

The former president’s view, according to friends and advisers, is that a formal run for the White House will bolster his claims that the multiple state and federal investigations he faces are all politically motivated.

He hopes, according to sources, that a candidacy could rein in prosecutors who may be considering criminal charges, particularly in connection with the Justice Department’s investigation into highly classified documents Trump held at Mar-a-Lago.

As his predecessor announced a third run for the White House, President Joe Biden tweeted: “Donald Trump has failed America.” The message came in the middle of Trump’s speech.

Trump left Washington after his supporters stormed the Capitol on January 6, 2021. But he chose to stay in the political arena and continue fundraising and holding rallies across the country.

Ahead of the Nov. 8 midterm elections, Trump appeared determined to take advantage of the predicted defeat for the Democrats and the overwhelming success of the Republicans to return triumphant. But the red wave, the color of the Republicans, which conservatives were counting on, did not happen.

To make matters worse, one of her closest allies, Kari Lake, failed to get elected governor of Arizona on Monday🇧🇷

These disappointing results, especially those of some of Trump’s backed candidates, cloud his presidential plans. Influential Republican voices even called for him to step down as party leader.

Former Vice President Mike Pence, who on Tuesday published his memoirs, in which he recounts the pressure he suffered to not certify the results of the 2020 presidential election, declined to comment on whether Trump should run again, in an interview. to the ABC network.

“That depends on the American people, but I think we’re going to have better options going forward,” said Pence, whose name is also among the possible candidates.

Part of conservatives is betting on another possible candidate for the White House: the governor of Florida, Ron DeSantis, 44 years old. The New Star of the Radical Right came out of the mid-term elections stronger and warned that their fight is “just beginning”.

At the moment, Trump maintains undeniable popularity among the rank and file, and polls continue to show him as the victor in the Republican primary. But the former president’s numerous legal problems threaten his return to the US presidency.

Trump is the subject of several investigations for his role in the attack on the headquarters of Congress, on January 6, 2021, and for his management of the White House archives, among others. But he, following his “instinct” as always, knows that until now he has survived all the scandals and is still standing, despite the countless times he was considered defeated.

A defeated former president running for election again while facing possible criminal prosecution is unprecedented in US history. Trump becomes the first former president to run again since Theodore Roosevelt, and the first since Grover Cleveland to do so after losing re-election. He is the only president to be impeached twice, and the only impeached by a bipartisan vote./AFP, NYT and WPost

Previous Will it be? Atlético dreams of Coldplay as an international attraction at the MRV Arena
Next Premiere: ‘Nada É por Acaso’ is inspired by a spiritist best-seller | Folha de Londrina newspaper