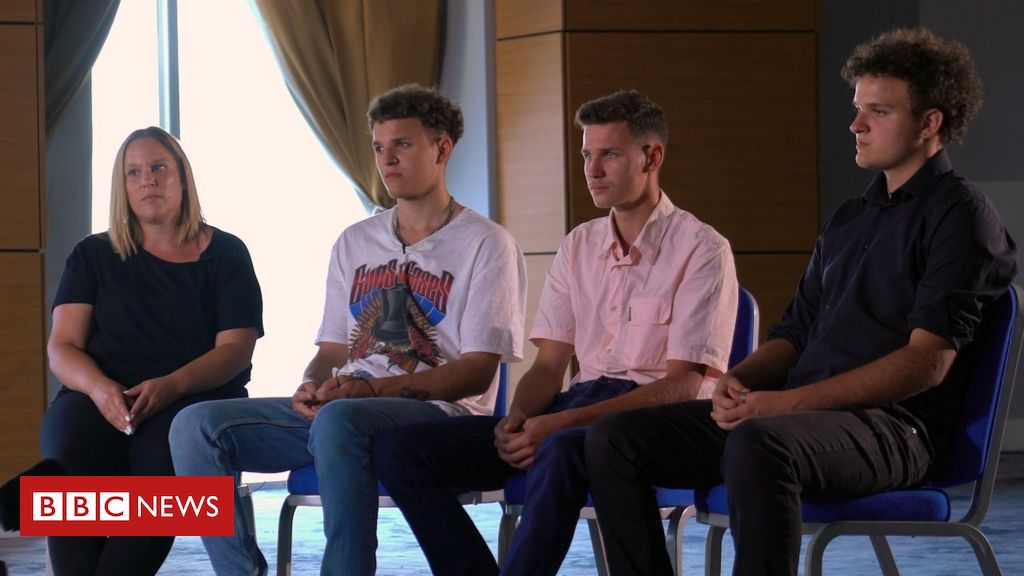 ‘Our mother killed the pedophile who abused us, but it didn’t end our nightmares’

Eight years ago, British Sarah Sands stabbed and killed a pedophile. In their first interview together, Sands’ three children tell BBC News that the pedophile had sexually abused them all and describe how they now feel about their mother’s crime.

On an autumn night in 2014, Sarah Sands emerged from her east London duplex with a hood over her head, armed with a knife. She walked to a neighboring block of flats, where an elderly man lived.

Once there, she stabbed Michael Pleasted eight times, in what she describes as “a determined and sustained attack”. He bled to death.

Pleasted was 77 years old and a convicted pedophile. And at the time, he was facing other charges.

He was accused of sexual abuse against boys in the area where he lived, in the London district of Silvertown. Legally, as in all cases of this type, the names of the boys could not be disclosed during the trial.

But BBC News can now report, for the first time, that all three boys involved in the case were Sarah Sands’ children.

The oldest, Bradley, was 12 at the time. In 2021, he waived his right to anonymity to disclose the abuse. And, in an interview with BBC News, her younger twin brothers, Alfie and Reece, did the same. They were 11 when their mother killed the man accused of abusing the children.

Now young adults — 19 and 20 years old — they remember the moment they learned, when they were still children, what their mother had done. Beside her, they say it was difficult growing up with their mother in prison.

Sands claims to feel remorse for what he did. But your children have no doubts about what they feel.

“I applauded her attitude,” Bradley tells the BBC. “I won’t deny it.”

“She really made us feel safer,” adds Alfie. “It didn’t lessen the nightmares. But it did give us a sense of security because you could walk down the street knowing he wouldn’t suddenly appear around the corner.”

“He literally lived across the street. I’d open my window and see his house,” says Bradley.

Months before the murder, Sarah Sands and her family had moved into a new home, also in Silvertown.

She befriended Pleasted, who lived alone. He was a well-known figure in the region. He often sat next to the neighborhood newsstand and chatted with locals and their children.

“I thought he was a nice old man,” she recalls. “I cooked for him, took care of him and always kept him company when I had time.”

She says that Pleasted approached the family, but that he really wanted to entice their children. One day, he invited the three boys to visit his house.

Until, one night, the twins told their mother that Pleasted had sexually abused them. And a week later, Bradley, the oldest, reported the same thing. Pleasted was arrested and charged with sexual abuse.

While awaiting trial, the judge released him on bail and told him he could go home. Sands says she was surprised and desperate. To take her children away from Pleasted, she moved her family into her mother’s house.

On the night of the attack, Sands was filmed on closed circuit TV going to Pleasted’s apartment. She says that she wanted to ask him to plead guilty to the charges and spare the boys from appearing in court.

“I realized I had made a huge mistake. He didn’t feel any kind of remorse. He said ‘your kids are lying’. The whole world froze. I had the knife in my left hand and I remember he tried to snatch it away from me ,” she recalls.

She insists that she didn’t mean to kill Pleasted.

Hours after the murder, she turned herself in at a police station, with the knife and bloodstained clothes. At trial, the judge stated that he did not believe she was “thinking rationally about what carrying the knife could result”, but added: “I’m sure she had the possibility of using it in her mind”.

Sarah Sands was convicted of manslaughter (non-intentional), i.e., no intent to kill. The judge found that she had lost control. She was sentenced to three and a half years in prison, but her sentence was eventually extended to seven and a half years as it was deemed too lenient.

Court of Appeals judges said that on the night of the murder, she did nothing to help Pleasted — she didn’t even call 911. She spent about four years in prison.

“I had taken the law into my own hands,” she says today. “I was always raised to take responsibility for my actions.”

Without a father and with their mother behind bars, the boys went to live with their grandmother.

“We were all in one room. There was no privacy,” Bradley tells the BBC. “My grandmother would call my mother in prison and ask if I could go out and play soccer, or hang out with my friends. And many times she would say ‘no’.”

Alfie says that the three brothers “missed a lot”. They saw her once a month on prison visits. “Sometimes you just want to bring up a problem with your mom and you can’t,” she says.

His friends knew what had happened. But Bradley says he remembers people asking, “Where’s your mom? We never see her around here.”

“They were mad at me,” adds Sands. “Before the arrest, we were so close and then suddenly I wasn’t there anymore. It was awful for them.”

Asked if she felt remorse for having ended the life of Michael Pleasted, she replied: “Absolutely.” She adds, “I bring life to the world. It never occurred to me that I would be guilty of taking life from the world.”

During the process, information emerged that, in the past, Pleasted had another name – Robin Moult – and that he had changed that name after being convicted of pedophilia. He had received 24 convictions for sexual abuse over three decades.

He was arrested for the crimes, but when he moved to his new neighborhood, no one there – not even the local authorities – knew about his past.

Sarah Sands is now campaigning for tighter restrictions on sex offenders who change their names.

Labor MP Sarah Champion says some abusers use new identities to get background checks, which are required for certain jobs.

“Once they change their names, they get a new driver’s license and a new passport in that name,” says Champion. “This allows them to get a new criminal background check.”

“And we are finding that these people are going to schools and other places where there are children and vulnerable people,” she said, “using their positions of trust in the most horrific ways.”

A spokesman for the British Home Office said the issue had already been looked into, but the Ministry could not publish the findings because they contained confidential information, which could be used by criminals to cheat the system. The Ministry said the UK has one of the strictest controls in the world for dealing with sexual abusers in local communities.

The rebuilding of the family

Sarah Sands got out of prison in 2018. Her children claim they have been able to rebuild their relationship with her since then.

“She spoils us a lot,” Reece says, smiling. “It’s nice, but she makes us realize all the years we’ve wasted together.”

“There’s nothing that’s going to break the family together,” adds Bradley.

The boys say that, when they were children, they felt guilty for revealing the abuse.

“If all of us had kept our mouths shut, we would have had our mom and gone shopping, gone to the movies, done what a normal 12-year-old boy does,” says Bradley.

But they say they understand now that it’s important for victims to speak out. “It’s tough, but things get better one day,” says Reece.

“You should always report it,” adds Alfie. “It’s better to talk. If you don’t talk, it will only get worse.”

Previous GAME DO BRASIL LIVE AND FREE: find out how to watch
Next World Cup 2022: Carlos Queiroz talks about injustice in questions to Iranian players