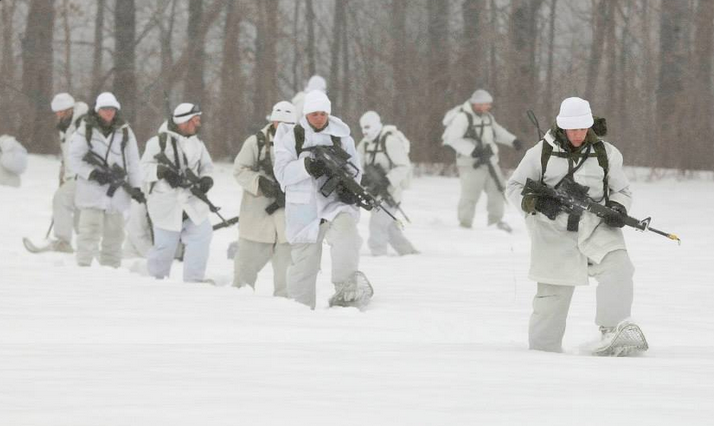 Russia can no longer count on ‘General Winter’ – Ground Forces

Moscow is trying to freeze civilians, but Ukrainian soldiers will have some advantages fighting through the cold season.

He helped defeat Napoleon’s Grand Army and Hitler’s Wehrmacht. General Winter has always been considered a good friend of the Russian forces. But this year, his loyalty is less certain.

President Vladimir Putin can no longer rely on Russia’s former ally now that the Kremlin soldiers in Ukraine are the demoralized invaders, facing sleet, snow and temperatures that drop to -20 degrees Celsius or more.

Military experts and analysts have suggested for months that winter would bring a hiatus to fighting on Ukraine’s front lines – but it is becoming increasingly clear that both sides will seek to take advantage of home in the cold, each commanding their generals in a duel. The Russian plan is to demoralize Ukrainian civilians by cutting off their electricity and heating, while the Ukrainians want to launch commando attacks and train their artillery against poorly equipped Russian conscripts, who lack warm winter clothes and hot food.

While the pace of fighting is expected to slow, there has been no slowdown in the eastern regions of Donetsk and Luhansk, despite snow flurries and frigid temperatures.

“Battles take place day and night, regardless of the weather,” combat medic and former Ukrainian lawmaker Yegor Firsov told POLITICO from the frontline. “Now I am close to Bakhmut. The situation here is very complicated. It changes every day swinging like a pendulum – from our successes and euphoria as we move forward, to the predicament when the enemy advances,” he wrote.

With a touch of bravado, he added: “It was snowing yesterday, we were happy about that, because there’s nothing worse than freezing rain.”

Ukraine’s Ministry of Defense has also made it clear that the plan is to keep the pressure going through the winter. “Those who are now talking about a possible ‘pause in hostilities’ due to freezing winter temperatures probably never sunbathed in January on the southern coast of Crimea,” Ukraine’s Ministry of Defense tweeted on Sunday, hinting at Ukraine’s ambition to take power. struggle for the peninsula that Russia illegally annexed in 2014.

It is clear that the general winter has not always been good for Russia. The Finns turned the tables on the Russians during the Winter War of 1940, outmaneuvering the Russians as they glided nimbly across the snow on skis to launch guerrilla attacks.

Ukrainians hope to inflict similar damage. The intercepts analyzed by the Conflict Intelligence Team, an investigative group, reveal how the deployed troops are already complaining about the lack of basic equipment – ​​let alone the winter kit – and the conditions they are experiencing, including without hot food for days.

For now, the action is snapping on several fronts. Nothing signals a peaceful winter.

According to Kateryna Stepanenko of the Institute for the Study of War, which monitors the fighting using open sources: “The Russians are resuming and intensifying their offensive operations southwest of Donetsk Oblast. [província]🇧🇷 She added that they were using paratroopers released by the withdrawal from the southern city of Kherson.

Reynolds added that the Ukrainians also want to push the Russians on the east bank of the Dnipro River 15 to 20 kilometers beyond newly liberated Kherson to prevent Russian artillery shelling. This week, both sides exchanged fire on the Dnipro River with the city of Kherson echoing with explosions, prompting Ukrainian authorities to offer to evacuate civilians.

Reynolds also suspects that the Russians may throw a wild card by massing “forces on the Belarusian border north of Kyiv again in an attempt to draw back Ukrainian forces from the front line in the south and east”.

A Ukrainian security source, who asked not to be named because he is not authorized to speak to the media, told POLITICO that Russian warplanes were apparently testing Ukrainian air defenses along the border. Russian military bloggers on Telegram say the Ukrainians are setting up more border observation posts equipped with electronic listening devices and are planting minefields north of Chernihiv.

Meanwhile, fighting is raging around Svatove-Kreminna and Bilohorivka in Luhansk, where the Ukrainians have identified weaknesses in the Russian defences. “In the Luhansk region, we are moving slowly while fighting,” Ukrainian President Volodymyr Zelenskyy said in his late-night television update on Sunday.

Ukrainians are undecided whether they want a harsh or mild winter for their campaigns. A warm season would help protect Ukraine’s civilian population from the fallout from Russia’s attack on the country’s power grid. But it would also mean muddy conditions – known as bezdorizhzhia (roadless) in Ukrainian and rasputitsa in Russian, making troop and armor movement difficult for them and the Russians.

And it’s the Ukrainians who want to quickly build on the momentum they’ve built up in recent weeks with their impressive victories in Kharkiv in the northeast and more recently Kherson in the south. The advance on Kherson brought Crimea within missile range.

A cold winter with frozen terrain would help both sides maneuver – but freezing conditions would likely take a toll on Russian troops and their shoddy equipment. Tanks and vehicles could no longer be hidden under leafless trees. Last winter, as they tried to push into Kyiv, the Russians were plagued by mechanical failures due to poor-quality manufacturing and a failure – like the Wehrmacht – to fully winterize its tanks and armored vehicles.

The Institute for the Study of War agrees that General Frostbite is likely to favor the Ukrainians. In a recent assessment, the Washington-based think tank said Russian troops will be at a disadvantage. “Winter weather could disproportionately harm poorly equipped Russian forces in Ukraine,” ISW said. The Russian defense ministry has been publicizing efforts to better train and equip its troops, likely a move the ISW interprets as an effort “to quell public dissatisfaction” in Russia with the conditions Russian soldiers must endure. Recently, the Rostov squad posted a video on Telegram complaining about the lack of proper training, equipment and food. “We pay for our food out of pocket,” they said.

Among other things, Russian forces began receiving Iranian-made bulletproof vests and helmets. But they are unlikely to match the quality of clothing and equipment that Ukraine’s western allies have been sending Ukrainian troops as the weather turns freezing.

The British Ministry of Defense recently reported that it had shipped 195,000 items of winter kit with more to come; other western partners are also supplying uniforms, mobile generators and tents for 200,000 troops – including Lithuania, Germany, Denmark, the United States, Sweden and Finland. Canada is supplying Ukraine with half a million winter uniforms.

On the domestic civil front, the Ukrainians are fighting to defeat General Winter, trying to replenish stocks of spare parts to fix the damaged power grid, and are looking for thousands upon thousands of diesel and thermal generators. They are also calling for more air defense systems to prevent Russian-inflicted damage in the first place – and lobbying by Western capitals, including Washington for US Patriot missiles, by Ukrainian officials is set to intensify.

Ukrainian national leaders, regional governors and mayors are doing their best to prepare for winter. Kiev Mayor Vitali Klitschko is preparing his city for a cold, dark winter and hopes to avoid mass evacuations. He is urging Kyiv’s more than 3 million residents to store enough water, food and supplies for the winter. And his administration is preparing about 1,000 centers where residents can warm up and eat.

The energetic mayor of Lviv, Andriy Sadovyi, is alarmed by the Russian attack on a power transmission station near the Rivne nuclear power plant, 200 kilometers northeast of Lviv, which presents other potential horrors.

Sadovyi is feverishly planning to keep not just himself but the entire western Ukraine city warm through the winter — and he hopes to have around 6,000 emergency shelters up and running; many will have wood stoves, others portable diesel generators. “We are storing a lot of firewood and we buy large stocks of oil and diesel. We must prepare for when the city has to live without electricity,” he said.

He has yet to take the traditional approach in his own office. He had two antique – and very large – ceramic wood stoves in his office restored to working order.

“Help me feed the logs,” he urged when POLITICO visited him last week at his town hall.

“These fireplaces have not been used for about a hundred years, until now.”