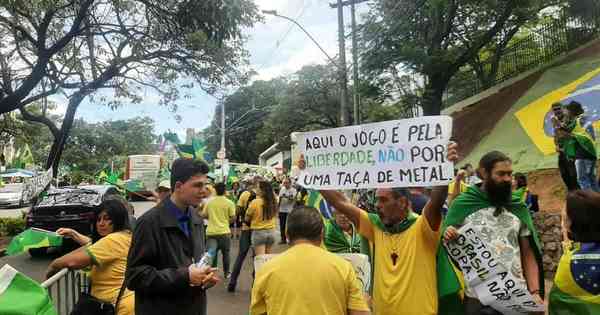 BH: in front of the barracks, Bolsonaristas reject the Cup: ‘against communism’ – Politics

For almost a month, Bolsonaristas gathered in front of the Army barracks, located on Avenida Raja Gabaglia, in the Center-South region of Belo Horizonte, wearing green and yellow in this Thursday’s demonstration (11/24), but rejecting the FIFA World Cup. Mundo on the day of the debut of Seleo in Qatar. With posters against the tournament, they tried to distance the image of the protests of non-compliance with the result of the presidential elections with the supporters’ party.

“I want Neymar to score soon. If he does, he will score 22”. That’s what a lady said to three other friends on Avenida Raja Gabaglia, while, for more than 20 minutes, the number 10 of the national team was trying to break through the Serbian blockade in Qatar. The phrase was one of the rare mentions of the canary team not accompanied by a criticism or rejection of the event.

Since the end of the elections, demonstrators have occupied the avenue and asked for the armed forces to intervene to prevent the inauguration of president-elect Luiz Inácio Lula da Silva (PT). With the start of the World Cup, they made clear their concern about having the act confused with cheering for the national football team.

“This is a game for freedom, not for a metal cup”, says a sign held by a man flanked by dozens of colleagues wearing CBF shirts. Messages of this type accumulate among the demonstrators and join many others of an anti-democratic content that already echo the recent speech by the PL, Bolsonaro’s party, against the ballot box. such as “Armed Forces, rescue source code”.

In an electric trio, protest animators, amid chants praising the army and cursing Lula, made speeches to dissociate the movement from the FIFA tournament. “Is there a World Cup today? No. We are here to be freed from communism,” said a woman into the microphone. “I ask you not to drink up front, if you are going to consume alcoholic beverages, go further down. We know that there are people filming and they will say that this is the World Cup” was heard from the speakers at another time.

Without TVs and radios, the demonstrators’ cell phones are mostly used for photos, videos and lives. While some others watched Seleo’s bids.

In the same zip code, and with the same colors, but with the opposite interest in relation to the match that was taking place in Qatar, friends gathered in a bar in Raja Gabaglia to accompany Tite’s men making their debut in the 2022 world cup.

Administrative analyst Joo Catanan said that he took advantage of the early end of the day to watch the cup with co-workers: “We left work at 3 pm, when they released us. We all worked together and took the opportunity to watch the game nearby”.

Guilherme Tavares, Joo’s colleague, approved of Brazil’s first match in Qatar and was not surprised by the star of the match: “let’s celebrate the sixth, God willing. Richarlison was not surprised, we were waiting for the pigeon to destroy, Vinicius Jr. also did very well in the game. I expected a little more from Neymar, but overall it was a very good debut”.

And the group’s celebration should extend throughout Thursday night “we scheduled to see the game here and we’re just waiting for the match to end to find out what we’re going to do afterwards”, punctuated consultant Suelen Freitas.

Previous 22 series and movies that are adaptations of books and premiered in 2022
Next FIFA World Cup 2022: Man of the Match award winners

That Tite’s call-up was bad and unbalanced has always been obvious and said HERE, and …