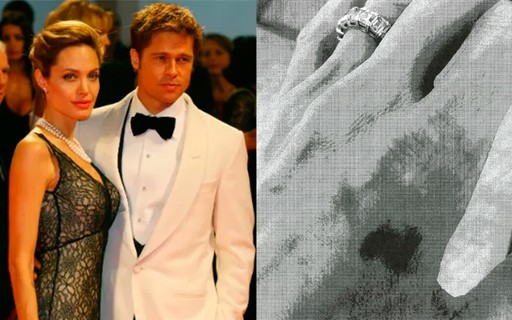 New details are coming to light about the ultimate family fight that decreed the end of the relationship between Angelina Jolie and Brad Pitt. Reports involving shouting, accusations and even the actor throwing beer on the Oscar winner’s head ended up being revealed, but new images from the FBI investigation into the case, which took place in 2016, show alleged injuries caused to Angelina’s body at the time.

The images, obtained by the Page Six website and present in the process of the federal investigation into the crime of domestic violence that occurred inside a private jet, show injuries and bruises on the hand of the actress and on her elbow. You can see a ring on the actress’s injured hand and also some of her tattoos in the image of the wound above her arm.

Angelina would have sent the images, which were later attached to the process, proving the escalation of violence in the couple’s relationship and which reached its peak in the incident. According to the FBI report, Jolie told investigators that Pitt, who had been drinking, yelled at her in an aircraft bathroom on the return flight to the US from Nice, France.

She alleged that Pitt “grabbed her by the head”, “grabbed her by the shoulders”, shook her, pushed her against the bathroom wall and yelled at her, “You f%$#@ this family”. Two of her minor children (whose names were redacted in the report) “were outside crying and asked, ‘Are you okay, Mommy?’” she said. Pitt is reported to have shouted back: “’No, Mama is not well. She is ruining this family. She’s crazy,'” the report said.

According to Jolie, this comment prompted one of her children to retaliate: “It’s not her, it’s you, you m%$#@”, which she said infuriated Pitt. The actress then claimed that she saw him run towards one of the children “as if he was going to attack”, at which point she said she gave Pitt an armbar, who threw her backwards in an attempt to free herself, pushing her to the ground. the chairs behind them. The moment of violence would have caused injuries to the back and elbow of the actress.

Black and white photocopies of the photos are included in the report, as well as handwritten pages provided by Jolie, allegedly of her children, containing descriptions of the incident. Handwritten pages are mostly redacted. During the fight, Jolie also claimed that Pitt had said about one of his children: “it looks like a boy from Columbine”, referring to the boys who invaded the school in the state of Colorado, promoting a massacre among their colleagues.

After they arrived in Los Angeles, the couple allegedly got into a physical altercation and she claimed that Pitt prevented her and the children from disembarking for 20 minutes. In addition to her back and elbow, the report stated that Jolie said she also suffered “a carpet burn type wound” on her left hand. A photo of the wound is included with the report.

Pitt was not arrested or charged over the incident after the FBI concluded an investigation in November 2016. In April, Jolie asked the investigation report – anonymously and as Jane Doe – the generic name used by victims to keep their identity secret – to find out why. that Pitt was never charged. Sources close to the actor claim that both parties had possession of such documents and that the actress only released them as if they were news in a media coup.

Previous Reporter from Minas Gerais expelled from Fifa Fan Festival in Doha, Qatar
Next De Arrascaeta was left on the bench for Uruguay, the player’s reaction that intrigued everyone at the Cup