In a widely anticipated and anticipated auction, Sotheby’s Hong Kong will offer the Golden Canary, a stunning 303.10 carat diamond, up for sale in December. It is estimated that the stone, one of the most perfect in the world, fetch at least 15 million dollars. The fascination with gems like the Golden Canary continues unabated, but in this 21st century natural diamonds, women’s best friends in the song immortalized by Marilyn Monroe in Men Prefer Blondesface the competition of identical pieces, only created in the laboratory. 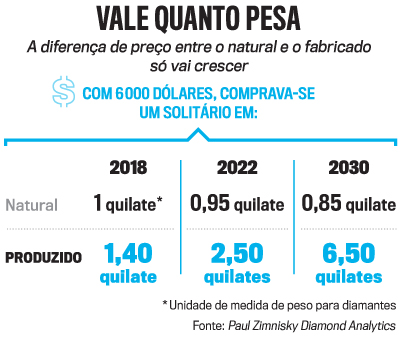 Just like the originals, artificial diamonds are made from carbon atoms subjected to high pressure and temperature and pass with flying colors the cutting, weight, purity and color tests carried out by specialized bodies. The advantage of the nature-like process is that the stones do not follow the tortuous route of slave labor, gang fights and smuggling common to “blood diamonds” and featured in the film of the same name. They are also free from the immense damage that mining often does to the environment. And because they are man-made rather than sought after and found under dirt and rock, their prices are on average 30% to 50% cheaper.

The big jewelers initially turned their noses up at the novelty and created mechanisms to quickly identify the differences, but little by little they adapt to the new times. This year, luxury conglomerate LVMH invested $90 million in a cultured stone factory in Israel. Tag Heuer, for its part, launched its first watch covered in artificial diamonds in April. “This innovation inaugurates a long history yet to be created”, anticipated Frédéric Arnault, CEO of the company and son of Bernard Arnault, the owner of LVMH. Production, concentrated in China and India, did not exceed 7 million carats in 2020, but should reach 19 million in ten years. In the name of sustainability, celebrities such as Lady Gaga and Zoë Kravitz have worn artificial diamond chokers on red carpets. In Brazil, few jewelers work with the stone, among them Gaem and Tantum. “It’s a luxury item at a more affordable price,” says Claudio Hanisch, from Tantum, who anticipates a 30% increase in sales in 2023. With the naked eye, it’s hard to distinguish what’s what in this brilliant universe.

Previous Lies on the networks mix Cup and politics, as Richarlison’s false dedication to Bolsonaro
Next Neymar lives with a sign of injuries in World Cups – Football