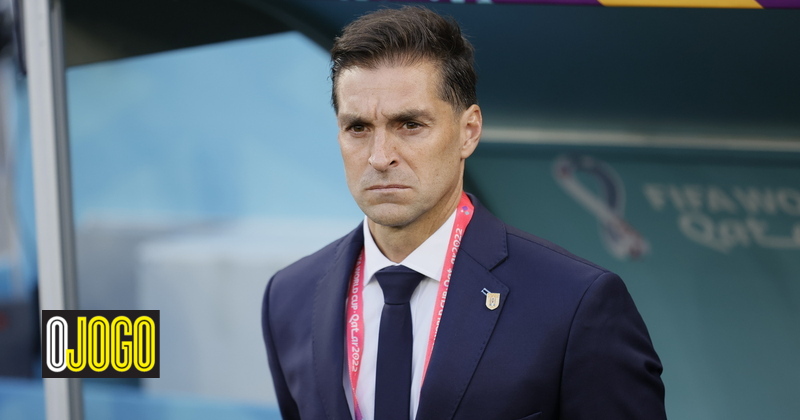 Uruguayan selector is a ″papucho″ and became heartthrob in South Korea

Diego Alonso became a heartthrob in South Korea, with the right to several complimentary messages on social networks, while in Uruguay he did not look so good in photography

Diego Alonso, coach of Uruguay, who is Portugal’s next opponent in the World Cup, became a sensation on South Korea’s social networks, thanks to countless love messages shared by Korean admirers. And the story, of course, also made the Uruguayan newspapers, where Alonso hadn’t even looked good in the picture after the draw in the opening game due to the substitutions he had made. With ears burning, but with a warm heart, here’s the summary of Alonso’s debut at the World Cup.

World Cup 2022. England draws with the USA and misses the possibility of qualifying for the “eighth”

World Cup 2022. The Worlds would be much sadder without Enner

With almost 89,000 followers, the 47-year-old Uruguayan coach’s Instagram does not reach the heels of Cristiano Ronaldo’s (the Portuguese already has 503 million followers, and it is very likely that the number is out of date at the time of reading.. .), but, coincidence or not with this South Korean passion, the truth is that the number of interactions skyrocketed: from the usual five/six thousand likes per publication, it rose to more than 25 thousand.

And, judging by some shares from South Korea, a country that has Paulo Bento as coach, the direct message box (DM,) was quite full. In English and also in Spanish, according to the Uruguayan newspaper El Pais. “Eres un papucho”, risked at least one of the supporters, who then shared the proof image that sent him. Translated, it would say something like “You’re a bun, Diego”.

Corinthians negotiated the departure of the 20-year-old Alemão defender to Portimonense, from Portugal and the …