Ball with motion sensor, collapsible stadiums resembling a giant Lego and with cooling systems, the 2022 Qatar Cup will be a watershed when thinking about how to hold and broadcast major events. The World Cup will be historic in terms of innovation and technology, as well as the democratization of access to them for spectators from all over the world.

One of the biggest technological innovations is the official ball of the Qatar Cup, called Ahl Rihla

Every four years, the populations of some countries unite in favor of a single cause: cheering for their Football Team. Sometimes we are “paralyzed” either by a good match between the countries represented or by a “magic” move like the goal of our capixaba Richarlison. Is it or is it not true? 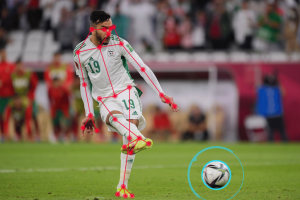 One of the biggest technological innovations is the official ball of the Qatar Cup, called Ahl Rihla🇧🇷 Considered the fastest ever produced, its characteristics allow for better aerodynamic performance. THE Ahl Rihla It has a motion sensor that helps refereeing with semi-automated offside artificial intelligence.

In the stadiums, 12 cameras are used to cover the field, the images generate a 3D animation that warns the referees whenever an attacker is in an offside position. Sensational!

Logically, thinking about the customer experience and the inclusion and immersion of the fans, the organization of the Cup makes these animations available on the stadium’s screens so that the fans have a better understanding of the referees’ decisions and for the transmission partners, promoting real-time access also to who watches from home.

It is also worth mentioning that this is the first World Cup to use 5G technology, which certainly expands and greatly improves the experience for fans.

Read also: Understand how 5G technology can change your life

It is obviously the first time at a World Cup that players will have access to their game performance information in a dedicated application, the FIFA Player🇧🇷 The app will provide reports from dozens of performance analysts on their successful and unsuccessful bids, game position, recurrence of matches, distances covered, average and maximum speed reached, among others. All this will help the players and their technical commissions in the decisions to be taken and or strategies to be adjusted on the field.

One of the most commented innovations for this edition is stadium 974 with 40,000 seats. The name given to the “stage” does justice to the characteristics of the arena, designed to be dismantled right after the World Cup, the stadium was assembled with 974 reused containers, the project has sustainability as its main pillar.

It is the first collapsible structure in the history of a World Cup and was erected in the port of Doha on the water’s edge to be naturally ventilated and avoid the need for air conditioning. A true giant “Lego”.

We know that the temperatures there at that time are quite high. Considering the concern with the fans’ comfort and as an innovative solution, an air conditioning system was developed combining insulation and targeted cooling to cool only places where people are. Avoiding wasted energy consumption in other stadium environments.

Technology even in the fabric used in the players’ uniforms

The jerseys of the players of some national teams will use technology to help with training. Micro sensors installed in the fabric will be able to identify parameters such as body temperature, stress level, breathing, hydration and other important vital signs of the players. Through Bluetooth, the smart shirts will be able to exchange information with each other and, from there, detail a series of data on the performance and health of the athletes. All in real time. Indeed, technology has entered the field!

“Management is like holding a pigeon in your hand. If you press too hard, it dies; if you loosen it, it flies.” tommy lasorda

Pigeon, columbiform bird of the family. Columbidae-Columba livia, originally from the Palearctic and domesticated 5,000 years ago by the Asians to serve as food and mail. It was introduced in Brazil in the 16th century and today it freely occupies different regions of the country.

@richarlison we are sure you will freely occupy various parts of the world.

A tribute from Folha Digital.

Keep an eye out for the news! Share your experiences with us, or if you need to clarify any doubts, please contact us, it will be a pleasure for us to be able to help you in any way. Always stay connected Digital Leaf.

THE Botafogo used a practically reserve team and, in pre-season rhythm, woke up in the …