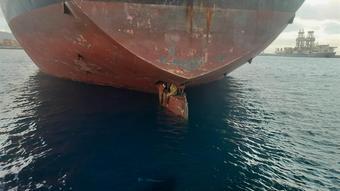 Spain’s coast guard found three illegal immigrants who had traveled from Lagos, Nigeria, to the Canary Islands, a Spanish archipelago in northwest Africa, sitting on the helm of a cargo ship.

The Althini II, flying the Maltese flag, arrived in Las Palmas, Gran Canaria, on Monday morning (28). According to data from geolocation systems, the vessel did not pause during the entire 11-day journey.

The three people were dehydrated and with body temperatures well below normal. They were rescued, taken to the port and received medical care at a hospital in the area.

“This afternoon, Salvamar Nunki [um barco da guarda costeira] rescued three stowaways located at the helm of the ship Althini II, anchored in the docks of the port of Las Palmas and coming from Nigeria”, published on Twitter the Salvamento Marítimo.

A spokesman for the Canary Islands local government told the EFE news agency that the migrants were met by doctors on the pier and were quickly transferred to hospital.

It is unclear how the three migrants managed to survive the journey, as they apparently traveled without supplies. The ship’s rudder barely had enough space for the three of them to sit down, let alone to lie down to sleep.

Previous Get discounts on purchases with these apps; check out!
Next Star of ‘Wandinha’, Jenna Ortega quit ’employee’ to star in series