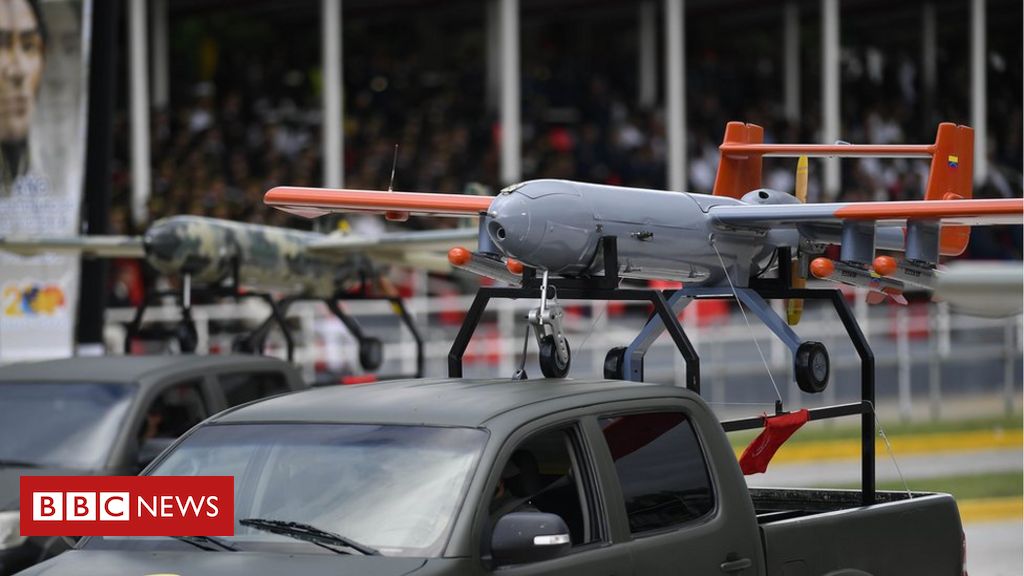 On the night of February 8 of this year, the dissidents of the Colombian FARC guerrillas lived through hell, according to reports from the Colombian military.

At 3 am, dissident guerrillas who were in the Venezuelan state of Apure, near the border with Colombia, were bombed from the air by the Venezuelan Armed Forces.

As published a few days later by the newspaper El Colombiano, citing intelligence sources from the Armed Forces of Colombia, the attack was carried out with armed drones.

“This would be a novelty because, if confirmed, it would make Venezuela the second country in the hemisphere, after the United States, to use real weaponry from drones”, says Andrei Serbin Pont, director of the Regional Coordination of Economic and Social Research (CRIES ), a network of research centers in Latin America and the Caribbean.

Venezuelan authorities never confirmed the use of armed drones in the conflict in February. However, a few months later, the government of Nicolás Maduro exhibited, during a military parade, drones with attack capabilities.

Thus, according to experts, Venezuela became the first country in Latin America to have armed drones.

To see how the country achieved this, one must turn to its relations with Iran.

On July 5, during the military parade to celebrate Independence Day, the Armed Forces of Venezuela showed two different models of drones with offensive capabilities.

According to the narrator of the parade, both devices were of “Venezuelan design and manufacture”.

However, several experts have pointed out that at least the ANSU 100 is actually a modernized version of the Iranian Mohajer 2 drone.

These unmanned devices were the first purchased by Venezuela from Iran during Hugo Chávez’s government.

According to information available in the ODIN military equipment database, belonging to the United States Army, Venezuela signed an agreement with Iran in 2007 to assemble 12 units of the Mohajer 2, from parts and pieces provided by the Quds Force. of the Iranian Revolutionary Guard.

The devices began to be assembled in 2009 by Cavim, the Venezuelan state company responsible for the production of weapons and ammunition.

In June 2012, in a television broadcast, Chávez showed these unmanned devices for the first time. It was said that they would be used in reconnaissance missions and that the Venezuelan officials who worked on the project had been trained in Iran.

It was also said that the model assembled by Cavim had high-resolution video and photography cameras and that, although in principle it could only be used on daytime flights, adaptation for night flights was in progress.

The ANSU 100 displayed at the July 5 parade are seen as a modernized version of the Mohajer 2.

In recent years, the relationship between Iran and Venezuela has only strengthened, mainly because the two countries are targets of sanctions imposed by the United States, which consider both the government in Caracas and Tehran to be authoritarian.

“In theory, it is supposed to be a modernization based on Mojaher 6 [o modelo mais avançado desse tipo de drone]🇧🇷 If you look at the photos of Mohajer 2, you will see that instead of a landing gear they had skis, because they were launched from a platform”, says Serbin Pont.

“As part of the recent modernization, what was done was to put a landing gear with wheels, with the idea that they can operate directly on normal runways.”

The analyst claims that these devices were displayed alongside a type of Qaem guided munition, also manufactured in Iran, which allows attacking targets in the air with considerable accuracy.

He points out, however, that there are still many unknowns about the functioning of these more modern drones.

“We have no evidence about the operating conditions of this new model and whether it was used with this weapon. There are sources that indicate that it was”, points out Serbin.

It should be noted that during the July 5 parade, both the ANSU 100 and ANSU 200 were displayed while being transported by ground vehicles.

This detail is especially important in the case of the ANSU 200, as before the parade, only drawings and models of it were known, without its operability having been demonstrated.

In November 2020, during a television broadcast, Maduro announced that Venezuela would also manufacture multipurpose drones and “for national defense”. The president said that the devices would be built with Venezuelan aluminum and would also be produced for export. The images show an object that appears to be a mockup of Mohajer 6.

An ambitious and opaque project

The development of drones in Venezuela has been marked by two characteristics: support from Iran and secrecy.

“Venezuela’s drone program comes from Iran. Venezuela did not have a drone program prior to its cooperation with Iran,” says Joseph Humire, executive director of the Center for a Secure Free Society. , a think tank based in Washington.

Humire indicates that, when these partnerships were launched, between 2006 and 2007, military cooperation agreements were embedded in trade agreements and energy agreements — in which state oil companies from both countries participated.

At first, this cooperation progressed slowly. It took years for the first Iranian drones manufactured in Venezuela to be ready, around 2011. The devices were manufactured and assembled at Cavim’s facilities at the Libertador air base, in the city of Maracay, in central Venezuela.

Despite the setbacks, Humire assesses that this is a serious initiative that may even have dual application: civil and military.

The analyst recalls that the program was paused between 2013 and 2016. From then on, the two countries decided to strengthen cooperation in the area of ​​defense, but had to deal with restrictions imposed by United Nations sanctions, which prevented Iran from exporting systems of weapons.

Soon after, Venezuela created its first battalion of drones, including not only Iranian aircraft but also other surveillance devices from China and Russia.

“Thus, Venezuela successfully equipped itself for the first time with a real drone program — since, initially, what happened was like a pilot program”, says the specialist.

According to Humire, it was thanks to the use of Iranian drones that the Venezuelan authorities were able to detect the so-called Operation Gideon, the failed landing attempt by a group of Venezuelan exiles accompanied by two former US veterans in May 2020, with the alleged objective to capture Maduro.

“So we’ve seen the use of drones primarily in surveillance tasks, but this goes way beyond what they’ve done in the past: test flights and small reconnaissance missions.”

The Venezuelan modernization of the Mohajer 2 was carried out by the aerospace services company Eansa — a subsidiary of the state-owned airline Conviasa, which is also headquartered at the Libertador air base in Maracay.

It is unclear how advanced Venezuela’s armed drone program is, as they have not been seen in action and it is unknown how many of them there are. Nor are there any answers about whether the drones are just updated Mohajer 2 or whether they were made from scratch or purchased.

BBC New Mundo (the BBC’s Spanish-language service) contacted the Venezuelan Ministry of Communications to request information about its drone program, but by the time of publication, no response had been received.

What experts agree on is that Venezuela would be the first country in the region to have drones with offensive capabilities.

Jochen Kleinschmidt, a researcher in international relations at the Center for Latin American Studies at the Catholic University Eichstätt-Ingolstadt (Germany), said that Brazil is looking for ways to integrate modern anti-tank missiles into its unmanned aerial vehicles (UAVs, as drones are known for its acronym in English), in addition to being equipped with suicide drones.

“Since all this is in its early stages, it would be correct, as far as I know, to say that the only armed drones in Latin America are perhaps the Venezuelan Mohajers and their derivatives, and the armed civilian drones used by some Mexican criminal organizations” , says Kleinschmidt.

Joseph Humire, in turn, believes that Venezuela has goals that go far beyond using drones offensively.

“It’s much more than just drones. Venezuela doesn’t want to produce drones only locally, but also export them,” says the analyst.

“In Venezuela, they are creating an endogenous local structure to produce drones within a broader military strategy — something the Iranians are very good at in terms of using drones: asymmetric amphibious capabilities, basically combining drones with speedboats. of attack and with satellite systems that allow you to monitor the waters”, he explains.

“Iran constantly does this in the Strait of Hormuz and in the Persian Gulf. Venezuela does not have this capacity today, but intends to obtain it in the future”, he concludes.

Previous Elon Musk wants to test brain chip in humans in 6 months – 12/01/2022 – Tec
Next ‘The Mothership’ Halle Berry Netflix Movie: What We Know So Far