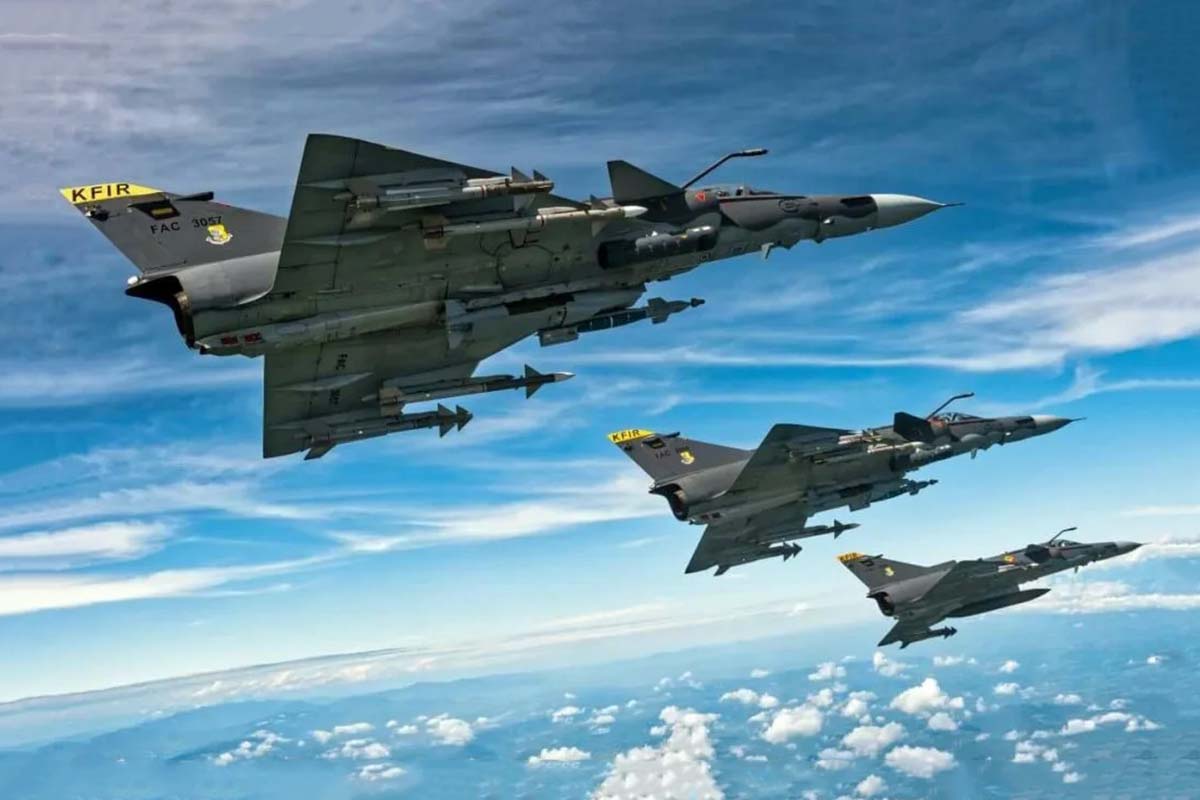 The current fleet of IAI Kfir fighters of the Colombian Air Force is reaching the end of its operational life and among the replacement options are the North American Lockheed Martin F-16 and the Swedish Saab Gripen, the latter being the same model used for Brazil.

In dialogue with Blu Radio, the Minister of Defense, Iván Velásquez, confirmed that negotiations are underway with different bidders for the replacement of its fleet of combat aircraft of Israeli origin, which will be available until the first half of 2023. end of its operational life cycle.

🇧🇷Within the National Defense System, in the project that has to sustain the capabilities of the Armed Forces, it is foreseen the replacement, not only of the Kfir, but of many elements that are reaching the age of obsolescence”commented Velasquez.

The Colombian Air Force (FAC) has been trying for some time to replace its Kfir fleet with a new combat aircraft, but the economic crisis caused by the COVID-19 pandemic, aggravated by the social and institutional crisis that shook the country during the year 2021, made it impossible to perform the operation.

Among the proposals received by the FAC, the Airbus consortium stood out, which offered 15 new Eurofighter Typhoon Tranche 3, of which 12 would be single-seaters and 3 two-seaters. It should be added a more economical offer from the Government of Spain for 17 Tranche 1 ex-EdA (Ejército del Aire y Espacio) aircraft that would be delivered upgraded to a superior Tranche, a configuration, very similar to the Tranche 2.

From France, the Dassault Rafale C was offered in its latest production variant, the F3. It is not known whether they also made available second-hand units, as in the Greek or Croatian cases.

For its part, the Israeli company IAI offered its Kfir NG, the most advanced version developed to date of this emblematic fighter. The Kfir NG can be purchased as a new build or as a modernization of existing units. It turned out to be the most economical proposal because it included recovering, extending the life of the cells and upgrading the Kfir from the FAC to the NG level. But at the end of the day, that doesn’t seem to have prevailed in the competition.

F16 and Gripen, the favorites

According to various sources consulted, FAC and Ministry of Defense commanders favor the US candidate, the Lockheed Martin F-16V Block 70 and the Swedish Saab Gripen E/F.

Both are 4.5++ generation single-engine planes (which seems to be what the Colombian Air Force is looking for) with AESA radar, 5th generation electronic architecture, relatively low radar cross section (RCS) and a more than capable weapons suite. interesting and balanced.

Both weapons systems have the virtue of being cheaper to operate than a twin-engine (especially a Gripen E, with an estimated flight hour of $8,000), with youth and many years of flight hours ahead of them, and come technologically combined with 5th generation aircraft.

For its part, Saab claims that the Gripen E/F is the most cost-effective solution for Colombia, mainly due to its compensation plans and technology transfer. For this, it would seek to organize industrial participation with CIAC (Corporation of the Aeronautical Industry of Colombia).

Although, for some time, the indications that emerged from Bogotá pointed to the North American fighter plane as the preferred option of the FAC and the Government. For 2021, negotiations with Lockheed Martin were well advanced. Rumors indicated that the contract for the purchase of 14 F-16V Block 70 would be worth US$ 4.5 billion.

But as Minister Velásquez rightly said during the interview, the final decision will be up to the Colombian government: “There was no conversation with the US government, it is an exclusive decision of the Colombian government. What President Petro proposed is to achieve the best benefits for the country. If this holds true, it will be the most profitable purchase for Colombia.”

Colombia is the main ally of the United States in the region and the relations between the Armed Forces of the two countries are historically close. This situation cannot be ruled out and will undoubtedly play in favor of the US option. Sweden and Saab would have to make an extremely convenient offer to Colombia if they are to overcome this political disadvantage and position themselves at an advantage.

It should never be forgotten that, beyond the recommendations of the Armed Forces and the technical characteristics of each weapon system, this type of choice is essentially political.