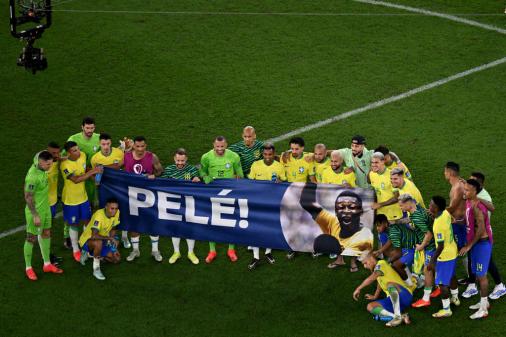 Youngest daughter of Maradona, Gianinna caused a controversy in her country after making a publication about the Tribute from the Brazilian National Team to Pelé after thrashing over South Korea🇧🇷 The heiress of the greatest idol of Argentine football praised the posture of the Amarelinha players.

– What a good Brazil. Honoring her idol – said Gianinna in her stories on Instagram.

In the first World Cup since the death of Diego Maradona, Argentina did not make any public tribute to the eternal number 10 of the Albiceleste. Although the AFA doesn’t seem to have prepared anything, the supporters of the “hermanos” tried to carry flags and bass drums with the image of the Pibe de Oro.

+ Find out how Argentina’s players reacted to Brazil’s victory

At the start of the World Cup, Conmebol prepared an event honoring Maradona on the day that two years since the death of the Argentine idol were completed. The celebration was attended by Gianni Infantino, president of FIFA, and some players who participated in winning the title in 1986.

On the other hand, the Brazilian team made a point of honoring Pelé, who has been hospitalized since last week at Albert Eistein Hospital, in São Paulo, due to a colon (intestine) tumor. Even so, the King of Football said that he is following the games of Amarelinha.