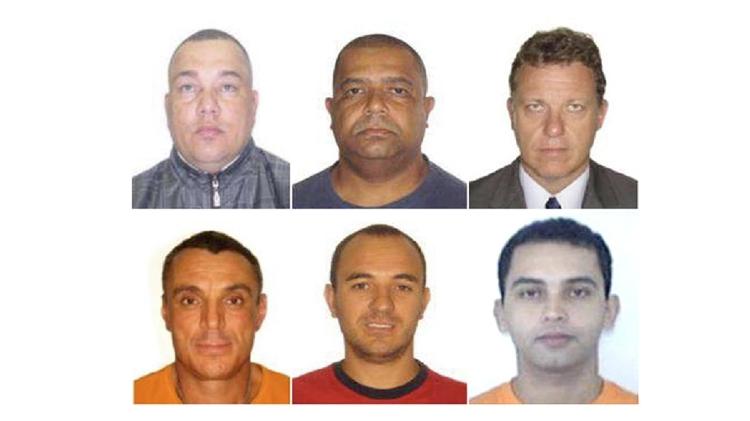 An investigation into a group of prisoners responsible for drug trafficking at Penitentiary 2 in São Vicente (SP) and in the Alto Tietê region helped the Public Ministry of the State of São Paulo to identify a gang of civil and military police linked to the PCC (Primeiro Capital Command).

It all started in mid-2020, when Gaeco (Group for Special Action and Combating Organized Crime) started Operation Intramuros to investigate drug trafficking planned and coordinated by prisoner Valdenilson Silva dos Santos, 29, Saruê, inside the P-2 from São Vicente.

The cell phone used by Saruê in prison was monitored with court authorization. According to Gaeco, he was the main user of the telephone line and, from inside his cell, he controlled drug trafficking in Suzano, Itaquaquecetuba and other regions of Alto Tietê, in Greater São Paulo.

Several conversations were intercepted between Saruê, his partner and brother-in-law, Jerônimo da Silva Menger, 48, known as Bicudo, both members of the PCC, and nine other people on the streets accused of being part of the gang involved in the sale of narcotics and money laundering.

As the investigations progressed, Gaeco de São Vicente intercepted Saruê’s conversations with a manager of his drug sales points, previously known as Will. The dialogues pointed out that Will paid bribes to the police in the Suzano region so that he could traffic without being bothered.

The Gaeco de Guarulhos, whose area of ​​operation covers the cities of Alto Tietê, was informed by São Vicente prosecutors about the possible involvement of police in the region with drug dealers linked to the PCC and initiated a criminal investigation procedure to investigate the case.

Who is Will? Gaeco agents discovered that Will is the nickname of William Araújo dos Santos, 30, Saruê’s trusted man. The two had several intercepted conversations starting on July 10, 2020, a week after Will left prison on parole. That same day, Saruê tells a partner that he will pay R$10,000 a month for police officers to stay away from his drug sales points. On August 28, 2020, he tells Will that he will put him in charge of the traffic and that he will have a 9mm pistol and a 38 revolver at his disposal.

On September 3, 2020, Saruê asks Will if he knows the “bomb house”, a place where drugs and weapons are stored. The manager is instructed to rent two properties, one to live in and the other just to hide the weapons and narcotics.

In other dialogues held in November 2020, Will reveals to a partner that he periodically pays bribes to police officers in order to exploit trafficking. In the conversation on November 14th, he says that he had paid R$1,100 and that at night he would give another R$1,900.

Gaeco de Guarulhos found that the payments were made to two informants (geese) and intermediaries for the police identified as João Felipe dos Santos, 36, known as Chico, and Júlio César dos Santos Vilela, 48, known as Gordo or Bola. They ended up arrested.

The investigations continued until October of this year, when Judge Fernando de Oliveira Camargo, from the 1st Criminal Court of Suzano, decreed the arrest of four civil police officers and two military police officers, accused of being part of the criminal organization.

Who are the six?

Edward peretti Guimaraes, 53. Accused by Gaeco of extorting three times from a man in Mogi das Cruzes — BRL 20 thousand, BRL 5 thousand and BRL 7.5 thousand — on January 19, 2021 and on December 23 and 25 of the same year, and keep a deposit with a large amount of cocaine in the same period Suzano🇧🇷

– Wilson Isidoro Júnior, 53, the Ninho. According to Gaeco, he diverted drugs from drug dealers in Suzano on March 24, 2021 and stole R$7,000 from a drug dealer in the east zone in February of this year.

– Ronaldo Batalha de Oliveira, 37, Nardo. Also according to Gaeco, Nardo was cautious when using his cell phone, but was mentioned by the accused countless times, which demonstrates his participation and relevance within the structure of the criminal group.

– Diego Bandeira Lima, 42, the Carioca. Accused of stealing drugs and demanding money from a dealer in São Paulo on June 22 of this year and of trying to sell narcotics in Suzano to a woman on June 25, 2021.

– Jorge Luiz cascarelli Junior, 48, Casca. Against him are the accusations of stealing money from a drug dealer in Mogi das Cruzes on October 1, 2021, offering drugs to another drug dealer three days later in Suzano and trying to steal drugs from another drug dealer on April 25, 2022 in Mogi of the Crosses.

– Jocimar Canuto de Paula, 47, the Molecote. Accused by Gaeco of trying to steal drugs from a drug dealer in Mogi das Cruzes on April 19 of this year and of stealing money from drug dealers in Guaianases, east of São Paulo, on August 5, 2022.

They were denounced to Justice for the crimes of association with a criminal organization, drug trafficking, theft and extortion and became defendants.

Will had preventive detention decreed by judge Fernando Oliveira Camargo on October 21 of this year. He is a defendant in another dismembered process and responds for the crime of association with drug trafficking. The arrest warrant was served on the same day.

The report was unable to contact the lawyers of the six arrested police officers; of the agents’ two informants nor of Will, but will publish the defenders’ version of all of them in case there is a demonstration.

Previous The day doesn’t stop! São Paulo has agreements for the arrival of two more reinforcements
Next Scarlett Johansson will star in the first film directed by actress Kristin Scott Thomas