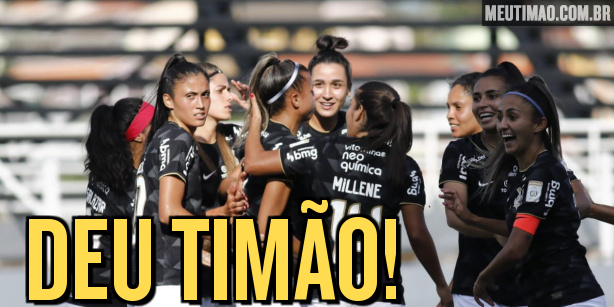 Timão was behind the scoreboard, but had the patience to seek a tie in the first half. In the complementary stage, the white and white team turned and extended the score to guarantee the advantage in the second game.

Alvinegra schedule: Corinthians returns to the field on Sunday, at 9:30 pm, when they play the second game of the grand finale. The ball rolls at Arena Barueri, for the decisive match of the Copa Paulista against Red Bull Bragantino.

Red Bull tried their first arrival with Luana, who received the pass through the middle on the edge of the area, but Lelê left the goal and stayed with the ball. The bid was not dangerous and the first minutes remained as a lot of study between the teams.

With just over ten minutes, Timão put pressure on the ball with Jaqueline and was fouled. In the collection, the ball was raised in the area and Andressa tried with a header, but sent the ball out.

Seven minutes later, however, the home team had the best chance of the game so far. After a good move built on the right, Leticia Monteiro kicked something in the corner and forced Lelê to jump and make a great save.

The teams alternated possession of the ball and Corinthians made gaps in the defense. In one of these, when Gi Campiolo failed to pass, Ariel kept the ball at the edge of the area, cleared Andressa of the move and hit Lelê as he left to score the first goal of the game.

With just over 35 minutes, Corinthians tried to respond with Diany in a kick from the edge of the area, but the Corinthian finish was stopped. In the next bid, the alvinegra team responded in kind and left the game the same.

In the exchange of passes in defense, goalkeeper Karol Alves was triggered and pressured by Jheniffer, who managed to steal the ball. Next to the move, Jaqueline had the leftovers and played for coverage to even the score.

Already in the additions, Corinthians still tried with Yasmim in the head, but Karol made the defense. After that, the game didn’t have many chances of danger and the first half came to an end tied at 1-1.

Corinthians returned for the second half without changes in the starting lineup. As in the first half, the first minutes saw the teams exchange passes and be cautious in the plays.

The first Corinthian arrival in this stage was with Jaqueline, who shot from outside the area after exchanging passes, but the finalization was weak and the goalkeeper kept the ball. Minutes later, Timão took the lead in a redemption move by Gi Campiolo.

In a free kick, the ball was picked up in the area and deflected high, leaving with shirt number 4, which managed the deflection and puffed up the net. In the very next move, the third alvinegro goal almost came out in a counterattack move by Gabi Portilho, but the ball went over the goal.

With 17 minutes, the alvinegra team made its first changes in the match: Tamires and Luana entered the field in the places of Gi Campiolo and Lia Salazar. A few minutes later, Millene stole the ball at the edge of the area, cleared two players and hit, but Karol made the save. Right on the next move, Tamires received it on the left and made the low cross for Jaque to deflect, who sent it out.

After the hydration break, Corinthians seemed to grow in game. The alvinegra team returned to a good arrival, again with Tamires on the left, but the danger was removed by the defense.

With almost 40 minutes, the alvinegra team scored their third goal to confirm the victory. Millene received on the left and activated Diany, who invaded the area and crossed low in the small area. The pass beat goalkeeper Karol and found Jaqueline free to score.

In the final minutes, right after the goal, Arthur moved the team once more and put Miracatu and Grazi in the places of Gabi Portilho and Millene. Soon after, Red Bull tried to reduce Corinthians’ advantage with Ariel, who received it, cleared Yasmim of the move and hit high, but saw Lelê deflect in a corner.

In the final stretch, the last Corinthians changes put Bell, Julia Brito and Paulinha on the field in the places of Mariza, Diany and Jaqueline. Even in stoppage time, Red Bull did not give up the second goal in the game. Ariel received the pass to me with a free kick and hit over Lelê, but exploded the post. The bid, however, was invalidated due to offside.