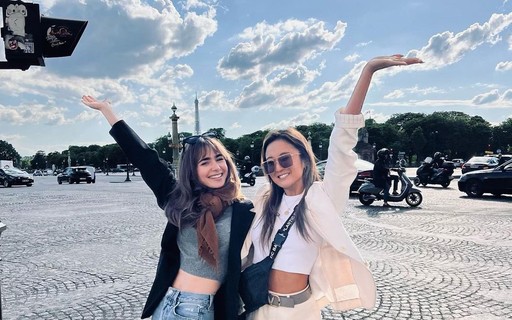 God help us all, Emily Cooper is back. After confirming on January 10 that there would be at least two more seasons of Emily in ParisNetflix has begun filming the third season, with Lily Collins captured on the streets of Paris filming with costar Lucas Bravo.

So what’s been revealed about the upcoming season of the Emmy-nominated series so far? First, virtually the entire cast is returning, including Bravo as Gabriel, Camille Razat as Camille, Ashley Park as Mindy, and Philippine Leroy-Beaulieu as Sylvie. Lucien Laviscount – who appeared as Alfie in the most recent season – has also been beefed up to be a series fixture, meaning Emily’s messed up romantic life is about to get even more complicated.

Plot-wise, given that filming takes place in the City of Lights, it’s also very likely that Emily has made the decision to stay in Paris once more. Those who watched the last season will remember that it ended on an open-ended ending, with Emily having to decide between taking a senior position in Chicago at Savoir or leaving the company and working for Sylvie’s own boutique. That means Emily will have to deal with the fact that Gabriel and Camille are now back together – and living in an apartment just below hers – as well as having a boss who totally despises her.

And while there’s no trailer yet, the leaders have been posting regular updates from Paris. (The big news from Lily Collins? The fact that Emily’s apartment now has its own Google Maps presence). Keep an eye out for more paparazzi snaps from outside Paris, too, with showrunner Darren Star hinting that the production will once again move to the French countryside (and possibly London or Berlin).

As for the release date? With filming set to end this second half, Emily in Paris will likely return to screens next summer – with a 2023 debut looking more likely. So there’s plenty of time for Emily to fling that Breton cap into the Seine.

Previous Modder creates version of the PlayStation 2 that is almost half the size of the PS2 Slim
Next Djokovic reminds Federer after winning Australian Open: “Tennis misses him”