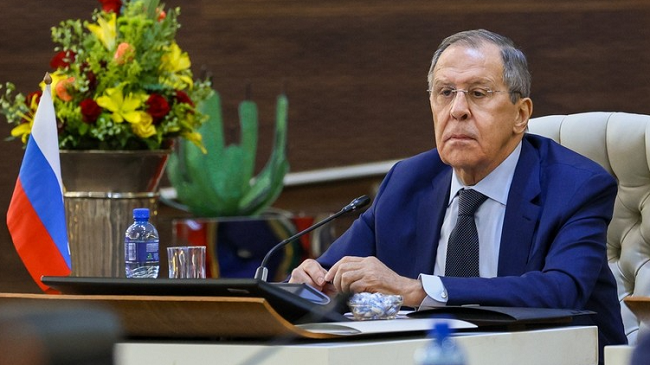 Russia and West on brink of ‘real war’, says Lavrov

What is happening in Ukraine is no longer a hybrid, but a real war between the West and Russia, Russian Foreign Minister Sergei Lavrov said on Monday (23).

According to Russian state-owned Tass, during a press conference following a meeting with South African Foreign Minister Naledi Pandor, Lavrov also noted that this “almost real” war is something the West “has been preparing for a long time against Russia. ”. The minister stated that Western powers are trying to destroy everything Russian, from the language to the culture that has existed in Ukraine for centuries, and even ban people from speaking their native language.

Lavrov pointed out that such practices have become common across Ukraine and that the country’s last two presidents, Pyotr Poroshenko and current leader Vladimir Zelensky, have turned into “war presidents” and “Russophobic leaders” after coming to power, despite to run their presidential campaigns under the promise of establishing peace.

“When we talk about what is happening in Ukraine, we are talking about the fact that this is no longer a hybrid war, but a real one, which the West has been preparing for a long time against Russia, trying to destroy everything Russian – from language to culture, which has been in Ukraine for centuries, and banning people from speaking their native language,” Lavrov said.

He also accused the West of turning a blind eye to the fact that Kiev forces continue to deliberately choose targets and carry out attacks in ways that terrorize the civilian population. “The West knows perfectly well that the Ukrainian regime deliberately bombs cities and towns using weapons supplied by the West,” the minister said.

Lavrov reiterated Moscow’s position that it has not carried out attacks in Ukraine against civilian infrastructure and that damage to it is attributable to Kiev’s regular practice of deploying heavy weapons and air defense systems in residential areas.

Previous Before the rape accusation, Daniel Alves posed as a patriotic coach – 01/25/2023
Next After images at the airport, the family plans intervention by Cara Delevingne