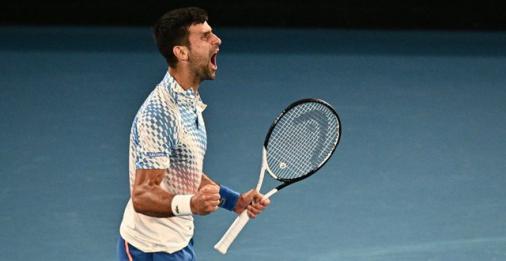 Novak Djokovic, number five in the world, did not give chances to the Russian Andrey Rublev, in sixth place and, this Wednesday, secured a place in the semifinals of the Australian Open, the first Grand Slam of the season, played on hard ground in Melbourne. The Serbian, the biggest champion of the tournament with nine conquests, scored 3 sets to 0 in the rival with partials of 6/1, 6/2 and 6/4 after 2h03 duration.

He takes his 26th straight win at Melbourne Park and equals the record held by American Andre Agassi. The two now have the best mark followed in the competition.

Djokovic hasn’t lost a match since the round of 16 in 2018 when he fell to South Korean Hyeon Chung. He was champion in 2019, 2020, 2021 and tries the fourth straight achievement. Remembering that in 2022 he was prevented from playing after being deported from Australia for not taking the Covid vaccine. Agassi achieved this feat in 2001, 2002, 2003 and was only stopped in the 2004 semi.

Nole reaches his 339th victory in Grand Slams and is two steps away from matching Rafael Nadal with 22 achievements and also back to the top of the world. The Belgrade native already has ten wins in ten games this season.

He faces on Friday the American Tommy Paul, in 35th place, who passed in four sets by Ben Shelton. It will be the first game between the two.

A more difficult match was expected for the Serbian, since Rublev was having a good time. But in the face of the predictable game, the Serb managed to nullify his good right and, thus, walked well in the game. He broke right in the third game and broke again to close out 6-1 with some difficulty in the last game, scoring 6-1 in 39 minutes.

In the second, it was 44 minutes with Nole opening 4 to 2 after breaking and having to save breaks in a complicated sixth game. Rublev had two more breaks in the last game, but Djokovic closed the door and closed at 6/2.

The Russian couldn’t change the game to upset Djokovic. Thus, the tour continued with a break in the first game. He held the serve until the end and closed without further problems.

Previous Why the Doomsday Clock Is Closer Than Ever to the Apocalypse
Next Fiancee of Léo Campos, from Botafogo-PB, offends northeasterners