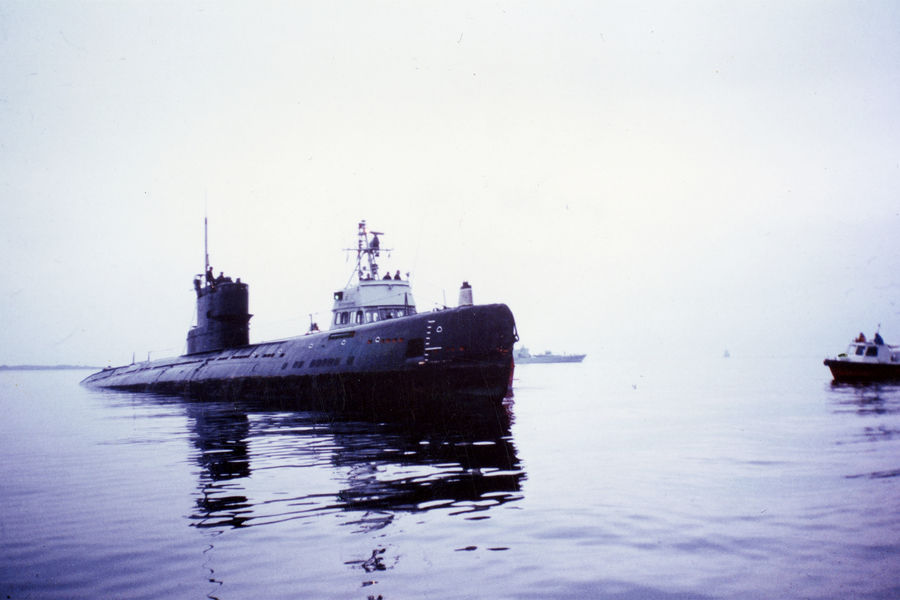 On October 27, 1981, the Soviet submarine S-363, which was on alert in the Baltic Sea, ran aground on the Torkhamnasker skerry near Turumsher Island, in a security zone near the Swedish naval base Karlskrona. The presence of a Soviet submarine near the base after an exceptionally accurate – and allegedly completely accidental – passage of a secret 12-meter channel was seen by the Swedish side as evidence of the USSR’s long-standing and extensive hostile submarine activity in Swedish waters. As a result of this incident, the attitude towards the Soviet Union in Swedish society deteriorated sharply, which was also largely facilitated by reporting in the local and world media.

At present, both Russian and Western experts more often accept the point of view voiced by the Soviet side: equipment breakdowns and the exceptional carelessness and incompetence of the submarine command, as well as its navigator, who managed to get to another place, confusing the coast with the open sea, are to blame for everything. not to notice the islands that flashed past, and even to ignore the signals of coastal radio beacons, which were nevertheless detected by the radio operator in the morning.

However, the opposite point of view is also widespread, according to which the violation of the border of Swedish territorial waters was deliberate and in fact was part of illegal activity against Sweden. According to this point of view, the submarine was supposed to observe the tests of the new Swedish torpedo, which took place the day before. The statement that the boat was on the surface for a long time is rejected in this case, since it should have been noticed from helicopters watching the water area. She could go to the surface position only immediately before colliding with the rocks. This was the conclusion reached by the Swedish Submarine Commission. Until now, the echo of those long-standing events sound the sudden and very panicky reports of the appearance of Russian submarines off the coast of Sweden, which happen with enviable regularity.

Even before the appearance of the Soviet submariners, the night before, the Swedish Navy was testing a new torpedo for the Torped 42 submarine in that region, with the participation of the Neptun submarine and two helicopters of the 13th helicopter division. No foreign unauthorized ships were noticed then. 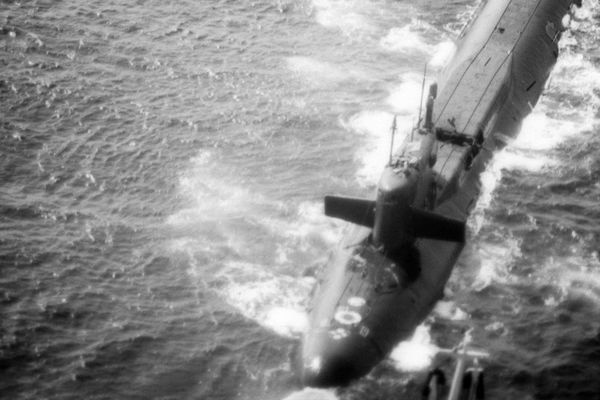 But late in the evening, the Soviet submarine S-363 ran aground just a couple of kilometers southeast of the base in Karlskrona. The scandalous sudden appearance of an enemy submarine also hit the reputation of the Swedish military. Throughout the night, the Soviet team tried to break the bank on their own, turned on the diesel engines, then part of the crew with the captain climbed the tower. A small island loomed 30-40 m from the submarine, and a larger island was visible at a distance of 100 m. They tried again and again to break away from the rocks, started the engines, but nothing helped. The inhabitants of the nearby islands heard the noise of the engines, but in the dark they could not see anything and assumed that the Swedish naval exercises were just continuing there.

Early Wednesday morning, October 28, two fishermen, Ingvar Svensson and Bertil Sturkman, went out to sea to check the nets and found that the surface of the water was covered with a thin film of oil. Then they returned to the shore. Svensson headed home while Sturkman went to the boat to pick up the tackle. And at about ten o’clock in the morning, he was the first to see a Soviet submarine, on which a flag with a star and a hammer and sickle was hung. In the wheelhouse, he saw three or four men looking at him through binoculars. Returning home, the fisherman told about all the neighbors and began to dial up to the representatives of the navy, who did not believe him for a long time, but then they nevertheless sent a boat to be checked.

The chief of staff of the naval base in Karlskrona, Commander Karl Andersson, arrived aboard the boat, and entered into negotiations with the Russians, boarding them and trying to drink alcohol, which he was offered. There were no English speakers among the team, so they had to express themselves in broken German. In the course of this conversation, it turned out that the Russians had made a mistake with the radio beacon, gyrocompass and navigation system. In addition, their sonar was damaged by fishing nets and the sonar did not work well (and the radio direction finder antenna frame was damaged).

The submarine was commanded by the captain of the 3rd rank Anatoly Gushchin, and this turned out to be his first voyage, not yet completely independent. The chief of staff of the Paldiski submarine brigade in Estonia, captain of the 2nd rank Joseph Avrukevich, to whom Gushchin was subordinate, was present as a mentor on the submarine. For navigator Korostov, this trip was also the first, and in it he showed his complete incompetence.

“To be honest, at that moment I didn’t so much react to the overwhelming news as I was afraid for the commander and navigator,” said later the political commander, Lieutenant Commander Vasily Besedin. – The state of both was extremely depressed. There is only one way to get them out of it – to distract them to work. Well, the commander already had enough of it, and to the navigator I said: “Look, Tolya, where, how and when the error appeared. It is necessary that you yourself, and not someone else find it. “

Police and Coast Guard, as well as warships arrived at the scene. Gushchin and Avrukevich refused the help of the tug, fearing that they would have to pay for everything in hard currency, they hoped for the help of Soviet rescuers, but the Swedes could not let anyone into their waters. A whole squadron of ships of the Baltic Fleet soon approached the border of the territorial waters, but they still did not begin to invade foreign territory.

Prior to this incident, very warm and good-neighborly relations had been established with Sweden, there was a frequent exchange of delegations; neutral Sweden was one of the few countries that participated in the 1980 Moscow Olympics. Nobody was interested in escalating the conflict. Perhaps the whole incident could have been “let down on the brakes”, but local fishermen quickly got through to the journalists, and they could not miss the sensation that turned up. The issue began to be resolved at the highest level, with the participation of ambassadors, foreign ministries and defense ministers.

At a certain stage, the Swedish authorities seriously considered the possibility of storming the submarine. Special forces landed nearby, keeping the sailors in the wheelhouse at gunpoint. The C-363 crew, in turn, received an order to destroy the submarine in the event of an assault. At the same time, the order did not specify whether this ship should be destroyed along with the crew itself. In Sweden itself, fees for military reservists were announced and all leave of absence was canceled.

There were two nuclear torpedoes on the ship, which also became known to the international community soon (an examination was carried out with an external gamma radiation detector). The piquancy of this situation was given by the fact that the Soviet delegation at that time actively supported the idea of ​​giving a nuclear-free status to the Baltic Sea at a meeting of the Nordic foreign ministers. 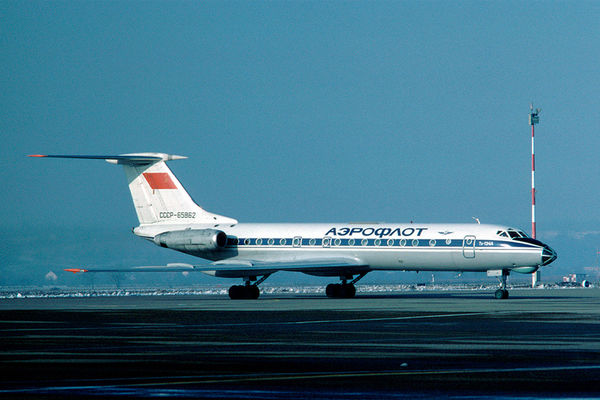 The conflict was resolved only on November 1 during the negotiations at the highest level. The USSR was demanded to bring an official apology, pay all expenses incurred by the Swedish side, provide the Swedish ships with an opportunity to remove the submarine from the shallows, and, finally, the Soviet sailors were to be interrogated. All of these conditions were accepted, but the term “interrogation” was considered unacceptable. They agreed that the submarine commander Gushchin and political commander Besedin would be “questioned” in the presence of two representatives of the Soviet embassy. Nevertheless, for the first time since the Second World War, the Soviet military was forced to give a report on their actions to foreign lawyers and did this within six hours.

Then on November 6, the Swedish tug “Achilles” pulled the S-363 from the shallows and towed the Soviet vessel into neutral waters. On November 8, the submarine returned to its permanent base in Liepaja, Latvia.

In Pravda, on the penultimate page, a short TASS message was published “On the incident with the Soviet submarine”: “On the night of October 27-28 this year, the Soviet diesel submarine No. navigation devices and the occurrence in this regard of errors in determining the location, in poor visibility went astray and ran aground near the southeastern tip of Sweden. At present, the submarine has been floated by Swedish rescue vessels and is anchored in a safe place. Negotiations are underway with the Swedish authorities on the withdrawal of the submarine outside the territorial waters of Sweden. “

After arriving, the submarine officers were interrogated by the Soviet commission to investigate the incident. As a result, the submarine commander Gushchin, political commander Besedin and, above all, Avrukevich, who was fired from the ranks of the Armed Forces, were punished. Gushchin was removed from his post and sent to serve ashore. Besedin, although he was found innocent, after all these events, too, could not return to the sea for a long time. The rest of the C-363 crew was not punished. The Swedish side was paid a million dollars for the rescue expedition. Commander Andersson, for having missed the appearance of an enemy submarine, was removed from his post as head of the base in Karlskrona, but continued to serve in the navy.

After an incident among naval wits, the submarine received the ironic nickname “Swedish Komsomolets”, playing on the frequent “Komsomol” names of Soviet submarines. In the West, it was called “Whiskey on the Rocks” – here the play on words is that the usual expression “whiskey with ice” can literally be translated as “whiskey on the rocks”, and Whiskey here means the name of the Soviet submarines of Project 613 according to NATO classification.