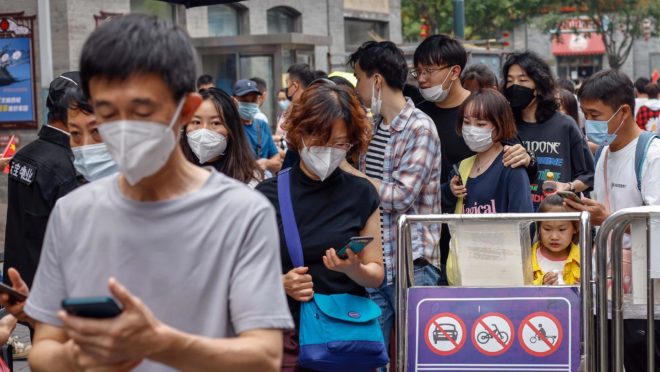 China started stocking up on Personal Protective Equipment (PPE), such as masks and gowns, months before notifying the world about the Covid-19 outbreak. In addition to severely restricting exports of this type of item between August and September 2019, around the same time Beijing also bought stocks of PPE in Europe, Australia and the United States. The discovery, published on Saturday (8) by the British newspaper The Telegraph, was made by former US government officials Tom McGinn, senior health adviser at the Department of Homeland Security (DHS), and Colonel John Hoffman, a senior researcher at the Food Protection and Defense Institute who has worked for decades in the US government and military.

Unconvinced that the pandemic originated in a seafood market in Wuhan, in December 2019 they began to study alternatives. As they scoured the Customs and Border Protection database, which tracks goods entering the U.S., they noticed that Chinese PPE exports to the country nearly halved between August and September of that year, more than three months ahead of which is disclosed to be the start date of the outbreak.

The pair analyzed the import data from the previous three years and attested that the variation is out of the normal, but when presenting the information to the DHS Office of Combating Weapons of Mass Destruction, they were told that the case would not be investigated as there was no evidence. in addition to normal fluctuations in supply and demand. Sought after by Colonel Hoffman, however, one of the largest hospital chains in the US, HCA Healthcare (which operates something like 200 hospitals and 2,000 clinics) reported a shortage of gowns and masks in late September 2019.

“I asked HCA staff if this had happened recently. The answer was no – they couldn’t remember seeing so much of it on backlog,” Hoffman told the Telegraph.

In addition to restricting the outflow of supplies from its territory, China, the world’s largest manufacturer of PPE, also bought global inventories in the United States, Europe and Australia. This has contributed to the global shortage of these items, according to former US State Department official David Asher, who served in the pandemic response and is currently a senior fellow at the Hudson Institute (think tank American Conservative based in Washington).

“It was a persistent increase [de compras chinesas]. And it was significant enough for my colleagues at DHS to hear about it from US companies that manufacture PPE and, more importantly, US hospitals reporting that they couldn’t get their normal supply of masks, gloves, gowns and goggles,” he said. Asher to the English newspaper.

For former US government officials, the failure to investigate the PPE shortage amounts to a cover-up, as an inquiry in this regard would have been important to protect citizens and understand the origins of the pandemic.

While China’s efforts to bring global PPE stockpiles into its territory intensified in January and February 2020, the shift in that market’s behavior months earlier has experts questioning whether Beijing had been aware of the problem for a longer time. Researchers warn that, in addition to the Chinese movement for protective equipment, other facts that occurred in September 2019 indicate that this may have been the real beginning of the pandemic.

Although virologists have banded together “to strongly condemn conspiracy theories that suggest that Covid-19 has no natural origin”, in February 2020, a definitive conclusion about the emergence of the pandemic cannot yet be reached. Neither natural emergence nor the laboratory escape hypothesis can be ruled out, as there is no direct evidence for either.

There are, among scholars, groups that believe that the SARS-CoV-2 virus may have been leaked by accident from experiments carried out by virologist Shi Zhengli’s laboratory at the Wuhan Institute of Virology (WIV), which was investigating the transmission of coronavirus by bats. The thesis is reinforced by observing that the restriction on PPE exports by China occurred at the same time that the WIV removed a database with sequences of bat virus genes.

“Surprisingly, these access logs were public and did not require login to view. Logs showed that the database went offline on September 12, 2019 between 2:00 am and 3:00 am local time. It stayed that way, except for a few short periods from December to February, during which there was no record of external access from outside the WIV. Mr. [Charles] small [um consultor que começou a investigar de forma independente o trabalho dos cientistas do WIV] archived hundreds of pages of these access logs, which showed a significant spike in activity in June 2019. We know that sometime between September and December 2019, version 2 of the WIV pathogens database fact sheet was replaced by version 3, which was replaced with version 4 on December 30th. By this time, the name of the database itself had changed from ‘Wildlife-Transmitted Viral Pathogen Database’ to ‘Bat- and Rodent-Transmitted Viral Pathogen Database,'” say Alina Chan and Matt Ridley, in book ‘Viral: The Search for the Origin of Covid-19’ [Viral: a busca pela origem da Covid-19, em tradução livre].

Asked about the disappearance, Dr. Shi Zhengli said the database was taken offline “for security reasons”. “Sharing this information privately with international members of the scientific community, if not publicly, immediately after the emergence of SARS-CoV-2 would have been a quick and effective way to dispel theories about the virus having escaped the WIV. The failure to share the database, even confidentially, with investigators, therefore, deepened the suspicion that there was something to hide”, complete Chan and Ridley.

In the publication, the authors list a series of “indications that the epidemic started before December 2019”. in Wuhan, with the participation of 9 thousand athletes from 100 countries.

“Oddly, Xinhua [agência de notícias oficial da China] reported that on September 18, the Wuhan Customs and Military World Games Executive Committee held an Emergency Response Exercise, to train what they would do in the event of two emergencies at the city’s airport: the arrival of nuclear-radiated baggage and the arrival of a passenger infected with a new coronavirus. Later athletes from several countries complained that they fell ill in Wuhan with fever, cough and diarrhea. Some were bedridden for weeks. However, there has been little to no effort to find out whether some of these cases could have been Covid-19. Josh Rogin of the Washington Post, who reported this story, called it an ‘investigative strand languishing through neglect,’” the authors say.

A report by Bloomberg, the financial market news agency, shows that in the week in which the US confirmed its first case in January 2020, shortly after the lockdown of Wuhan, the epicenter of the pandemic, Chinese civic organizations undertook an effort to buy masks and other protective equipment on five continents. The Communist Party’s plan was to urge overseas Chinese to buy masks in bulk to “send back lots of scarce supplies.”

The unprecedented mobilization was orchestrated by the United Front Labor Department of the Chinese Communist Party and resulted in PPE shortages in many locations across the planet. In late February, according to Chinese government data, 2.5 billion items worth 8.2 billion yuan ($1.2 billion) were shipped to China, which included two billion masks.

It is worth remembering that, until April 2020, the World Health Organization (WHO) itself did not recommend the use of masks by healthy people, claiming there was not “sufficient evidence” of the effectiveness of the item in protecting against Covid-19. The WHO’s advice was that only healthcare workers, sick people and their caregivers should wear masks. In June, however, the Organization changed the guidelines and said that masks should be worn in public by all people, to help contain the spread of the coronavirus.

In addition to the United Front’s action, some foreign governments also sent aid to China, such as Canada, which sent 16 tons of PPE on February 9. As the virus spread, demand for masks and other equipment sent the market soaring soon after, and Canadian Prime Minister Justin Trudeau came under fire when prices for N95 masks soared fivefold.

At the time, former Mexican ambassador to Beijing Jorge Guajardo warned, at twitter, that there was something strange about the search for masks in America. “As surely as day follows night, the scarcity of something in China is soon reflected closer to home,” he said. In an interview with Canadian portal Global News, Guajardo criticized the “surreptitious” Chinese operation, which left “the naked world, without provision of PPE”.

Now working at a consultancy in Washington, USA, he was contacted in mid-January 2020 by a Mexican supply chain logistics source. “They said, you know a funny thing, I’m being inundated with orders to send every N95 I can find to China.” The result of the movement did not take long: in March, masks sold during January and February to China were being sold for a price 20 to 30 times higher in Mexico, according to Guajardo. “This pandemic was complicated by China’s cover-up at the beginning,” he points out.

In addition to Guajardo, another critic of China’s actions in relation to PPE was Canadian Conservative MP Erin O’Toole. He told Global News that sources in military and industrial circles were warning Western governments about an apparent confiscation by China of the global supply of PPE. According to the lawmaker, “in fact” senior Canadian bureaucrats were informed of the maneuver in January, but instead of responding to the threat, they sent tons of masks and other equipment to China. For him, not only the methods used by Beijing, but the response of the Canadian government needs extensive investigation.

“The Communist Party of China intentionally withheld information about an outbreak for at least weeks, if not months. Not only did this give the world less time to respond, it minimized the potential severity of the threat. Countries have not made decisions regarding flight bans and (protection of) PPE stores,” he adds.